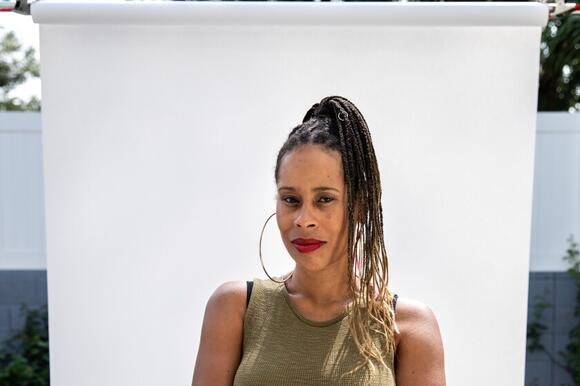 Playwright Dominique Morisseau’s work is rooted in social justice and equity . It is about workers’ rights and Black communities standing against disenfranchisement. Her plays also concern Black women, some of whom are abused, and how those women confront that abuse. So when Morisseau learned that Black women on the creative team of her play “Paradise Blue” ( which recently opened at Geffen Playhouse ) had been verbally abused during the production, the situation was not one she could countenance.

In the days before Thanksgiving, less than a week after the play’s West Coast premiere opened to impressive reviews, Morisseau pulled “Paradise Blue” and ended the show’s run early. In a subsequent Facebook post, she cited harm against Black women artists and wrote that the Geffen had been made aware of that harm, had promised to take immediate action against it, and had failed in acting on the promise.

“There were Black women, some of them young, in and out of this process, whose eyes were on me, and they were watching the Geffen, and they were feeling small and powerless,” Morisseau says in an interview with The Times. “And that’s when I stepped in, because I have to.”

The cancellation of “Paradise Blue” made headlines, with many theater fans speculating on the nature of the unrevealed details. Morisseau is not interested in naming names — or cataloguing what happened behind the scenes. She says she came to that decision out of concern for vulnerable theater makers who lack the power of marquee visibility. The bottom line, she says, is that even though the harm began within the production, it was up to the Geffen to put a timely stop to it.

In a statement to The Times, Geffen Executive Director Gil Cates Jr. said the Geffen takes all matters of concern from staff and members of production very seriously and that it attempts to do everything possible to honor the work, the actors, the audience and the theater.

“Our effort to resolve conflict in a sensitive and thoughtful manner within the Paradise Blue company resulted in the removal of an individual from the production, which occurred the day before cancellation,” Cates wrote. “Over the last year, we’ve been reexamining best practices and refining our action plan to foster an environment where all artists and staff feel embraced and fully supported. We’ve made progress and recognize this work is a critical component of our ongoing evolution as an arts organization.”

Morisseau says that the Geffen agreed to remove "part of the harmful party" two days earlier than it did, and during the lag time, more harm was done. Also, during that window, she says she repeatedly stated that she would have to pull her play if the Geffen did not act immediately.

Representatives for the Geffen say they were following an agreed-upon directive to procure an apology or terminate and worked diligently to get that apology. When it became clear the apology was not forthcoming, the theater enacted the termination.

Morisseau is currently in New York City, working on the Broadway opening of her play “Skeleton Crew,” which, along with “Paradise Blue” and “Detroit ’67,” is part of a three-play cycle called “Detroit Project.” She also wrote the book for the musical “Ain’t Too Proud — The Life and Times of the Temptations,” which is running at the Imperial Theatre on Broadway. Her new play “Confederates,” which deals with women confronting abuse, institutionalized racism and sexism, is set to open off-Broadway in February.

As she has been asked about the fallout in Los Angeles, Morisseau says she has found herself returning to phrases from her own plays. One line from “Skeleton Crew,” in particular, keeps running through her head, summing up her feelings. It’s spoken by Reggie, a worker in a fictional Detroit automotive factory in danger of foreclosure: “You tell me how to fight and stand on some kind of ground in this industry without putting something massive on the line to do it.”

Morisseau said she feels it’s impossible to talk about what happened at the Geffen without talking about her work and who she is as a person and as an artist. For anybody following her trajectory over the years, she says, her decision regarding “Paradise Blue” should not come as a surprise.

“I can’t keep doing these plays and not be about that in my life,” she says.

Morisseau comes from a working-class family, and she tells the stories of working-class people. The dignity and value of labor matters to her. This has been a year of great loss for the playwright — one shaped by inequity. Many people in her family are frontline workers who were not able to work remotely from the safety of their homes, and a majority of them have come down with COVID-19. Morisseau has lost many loved ones to the disease.

“The way we treat people has always mattered to me,” Morisseau says. “I’ve never been able to stand back and watch people be mistreated.”

Members of the production were paid in full, per their contracts.

Morisseau has collaborated with the Geffen in years past: “Skeleton Crew” ran at the theater in 2018. She says that she understands that problems can, and will, arise in the production of any play, but that her issue is with how the Geffen Playhouse failed to rise to the occasion.

“When leadership is strong, you have to make tough decisions in service of the people’s wellness, and I felt in this particular situation that everybody’s wellness was not considered,” Morisseau says. “The theater makers that were causing the harm were being centered over the people who were being harmed — and those who were reporting harm were told to wait it out and endure it.”

A 2018 MacArthur fellow, Morisseau has emerged as a powerful voice for change and accountability in American theater. She is among the signatories of a document titled “We See You White American Theatre.” Issued in the summer of 2020 during the swell of uprisings in the wake of George Floyd’s murder, the letter, signed by more than 300 artists of color, aimed to address systemic racism in the field in order to create a more equitable and diverse ecosystem for the art form.

During that tumultuous pandemic summer, many theaters, including Geffen Playhouse, expressed solidarity with the movement , vowing to implement antiracist policies and enact change from within that would place greater value on — and give more agency and respect to — theater makers of color. In October 2020, the Geffen formed a Diversity, Equity and Inclusion committee and expressed a desire to "learn, grow and evolve as an arts organization." Morisseau says she is concerned that as the theater world begins to reopen after its pandemic battering, many of those pledges will reveal themselves as lip service.

“There have been statements around equity and injustice, and becoming antiracist, and those words sound real pretty,” she says. “But it’s easy to say those things, and harder to implement those things. The implementation is what I’m focusing on.”

Early results in Los Angeles did not inspire confidence. In October, Center Theatre Group — the city’s largest and most prominent nonprofit theater company — came under fire after playwright Jeremy O. Harris threatened to pull his Tony-nominated work, “Slave Play,” from the Mark Taper Forum’s 2021 lineup after complaints that the Taper’s season included work by only one female writer.

Harris ultimately decided to keep his play on the roster after CTG pledged to devote the entirety of its 2021-22 season to plays written by women-identifying or nonbinary playwrights, the majority of whom would be BIPOC artists. Morisseau says she is in development with CTG and that the company has been supportive of her work.

Moving forward, Morisseau wants to see theaters, including the Geffen, honestly reflect on what they need to do in order to achieve real and lasting change.

“The Geffen knows it has work to do,” she says. “You’ve gotta really dig deep and find out why when people told you they were being harmed, your first impulse wasn’t to protect them. You gotta ask why, and that’s some deep digging, that’s not surface work.”