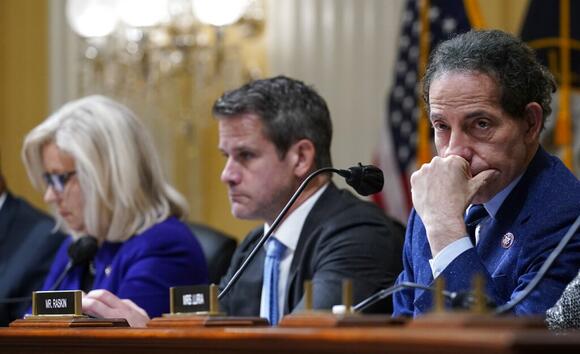 T he House select committee tasked with investigating the Jan. 6 attack on the Capitol has subpoenaed the phone records of private U.S. citizens but has not subpoenaed the records of members of Congress, according to Indiana Republican Rep. Jim Banks and another GOP aide.

Subpoenas were issued several weeks ago. Telephone companies did send notice to the individuals affected, and none of them objected, according to the Republicans.

News of the subpoenas comes three months after a CNN report that the select committee requested that telecommunications companies preserve the phone records of members of Congress and members of former President Donald Trump’s family.

Following that Aug. 30 report, House Minority Leader Kevin McCarthy said in a statement that the companies who complied would be “in violation of federal law and subject to losing their ability to operate in the United States,” warning that “a Republican majority will not forget and will be ready to hold them fully accountable under the law."

While no members' phone records have been subpoenaed yet, their communications could still appear in those of individuals who have. What happens to the subpoenaed material is then up to the committee.

That could set up a repeat of a controversy during the Trump-Ukraine impeachment investigation surrounding Democratic Rep. Adam Schiff, chairman of the House Intelligence Committee, and Rep. Devin Nunes, its ranking member.

Intelligence Committee Democrats' Trump-Ukraine impeachment investigation report released in 2019 included records of some phone calls by Nunes because it had obtained the records of Trump lawyer Rudy Giuliani from AT&T. Giuliani said he was shocked that AT&T turned over the records.

Banks, who McCarthy originally selected to sit on the committee but was then vetoed by House Speaker Nancy Pelosi, said in a letter to the committee and telecommunication companies in August that any attempted collection of member records was an “authoritarian undertaking” with “no conceivable legislative purpose.”

With Giuliani being blindsided that his records were turned over in mind, Banks had also warned the companies “of their legal obligation not to hand over individuals' private records unless the subject of the subpoena consents to information being shared or the company has a court order to turn over the records.”

That makes the fact that companies sent notice to those whose records were subpoenaed by the select committee an important development, though it is not clear that every person actively read the notice.

The select committee did not return a request for comment.

Banks reiterated on Wednesday that he views the Jan. 6 committee's investigation as a sham.

“The most important fact about the select committee is that it's all based on a conspiracy theory. According to the committee, January 6 was an inside job. It was an attempted coup, disguised as a political rally that was secretly orchestrated by President Trump and his closest advisers. That is a lie,” Banks said.

Ohio Rep. Jim Jordan, who was also selected by McCarthy to sit on the committee but was vetoed by Pelosi, elaborated on some of the actions that a Republican majority could take against telecom companies that McCarthy had mentioned months ago: Take away liability protections that telecom and internet companies have under Section 230, and “speed up the path to get antitrust cases to the Supreme Court.”

“This partisan committee is just — a chilling impact it has on our speech. But frankly, it shouldn't surprise us, because every single liberty we've enjoyed as Americans under the First Amendment has been assaulted by the Left over the last year,” Jordan said.

The Jan. 6 committee has “talked with more than 150 individuals who are engaging and cooperating with our probe.” It has issued 45 subpoenas and has held former Trump adviser Steve Bannon in contempt of Congress over his refusal to cooperate and will vote on doing the same for former Justice Department official Jeffrey Clark.

They need to start focusing on the politicians that were involved in any part of January 6 2021 so they can all be held accountable. Jailed if actions require it and definitely stopped from ever being in any political office again. These politicians are the ones destroying our country and keeping us divided, as you can see it daily in their tweets, comments and actions

Get all records of All the committee records. Nancy Pelosi. All the Tapes of that day. But Democrats don't that to come out why.

Senate Republicans are already taking aim at a police reform executive order that President Joe Biden is expected to sign in the coming days, warning that the order would effectively defund state and local police departments.
PRESIDENTIAL ELECTION・1 DAY AGO
WashingtonExaminer

Two fringe far-right leaders in the "Groyper" movement were subpoenaed as part of the investigation into the Capitol riot, the House Jan. 6 committee announced Tuesday.
WASHINGTON, DC・6 DAYS AGO
POLITICO

The House minority leader, who helped scuttle an attempt to establish a bipartisan commission to investigate the insurrection, has spent months thrashing the select committee.
WASHINGTON, DC・19 HOURS AGO

“I think are going face a real risk of jail for the kind of laws they are breaking,” said the former Republican Speaker of the House of the Jan. 6 special committee Sunday.
CONGRESS & COURTS・19 HOURS AGO
Business Insider

The bipartisan letter comes after Pelosi reversed course, saying she's open to a ban. "If members want to do that, I'm OK with that," she said.
MAINE STATE・1 DAY AGO
POLITICO

"March 1 is not a deadline for one thing or another," he said at a POLITICO event. What happened: Majority Leader Steny Hoyer took a pragmatic tone about the future of the Democrats' climate change and social spending bill during an interview with POLITICO on Tuesday, insisting the March 1 State of the Union address should be viewed as an artificial deadline.
CONGRESS & COURTS・18 HOURS AGO
TIME

In Blow to McCarthy, Supreme Court Says Congress Can Keep Voting from Home

This article is part of the The DC Brief, TIME’s politics newsletter. Sign up here to get stories like this sent to your inbox every weekday. In a functional Washington, the three branches of government have a quiet understanding: they’ll check and cajole, temper and troll. Congress has no problem denying confirmations for top Administration jobs on whims—and they do—while the White House has no trouble sending an agenda that may run counter to incumbent lawmakers’ interests down Pennsylvania Avenue. The Supreme Court can tell both to tear-up their work and start from scratch.
CONGRESS & COURTS・1 DAY AGO

"Perhaps this means some of our colleagues will miss out on lucrative investment opportunities. We don't care," the lawmakers said.
CONGRESS & COURTS・1 DAY AGO
Reuters

WASHINGTON, Jan 24 (Reuters) - The U.S. Supreme Court on Monday declined to hear a challenge by Republican lawmakers to pandemic-related proxy voting rules set by Speaker Nancy Pelosi in the Democratic-led House of Representatives that were tailored to limit exposure to COVID-19. The voting rules, implemented in May 2020, allow members of the 435-seat House to serve as proxies for colleagues in quarantine or otherwise unable to cast floor votes in the chamber. House Republican leader Kevin McCarthy and other lawmakers had asked the Supreme Court to reverse a lower court decision that allowed the remote voting rules to remain in effect.
CONGRESS & COURTS・1 DAY AGO
AFP

Democrats' leader in US Congress to run for reelection

The top Democrat in the US Congress said Tuesday she plans to run for a 19th term in office, announcing that she had determined to stay on to combat existential threats to democracy. House Speaker Nancy Pelosi, who turns 82 in March, had been expected to step down, with her party bracing for a possible heavy defeat in this year's midterm elections. Despite dire predictions of a Democratic wipeout in November, Pelosi is likely to win her liberal San Francisco district comfortably -- but she did not reveal whether she intended to keep her leadership role. "Our democracy is at risk because of the assault on the truth, the assault on the US Capitol and the state-by-state assault on voting rights," Pelosi said in a video announcement.
PRESIDENTIAL ELECTION・14 HOURS AGO
POLITICO

The California-based jurist also became the first to reject a Trump ally’s challenge to the panel’s structure.
CONGRESS & COURTS・10 HOURS AGO

Liz Cheney among those to condemn remarks by former House speaker as committee member Zoe Lofgren says: ‘I think Newt has really lost it’
CONGRESS & COURTS・2 DAYS AGO
The Independent

Former Republican House Speaker Newt Gingrich has predicted that members of the House Select Committee investigating the Capitol riot on 6 January last year could be jailed if the GOP takes control of Congress after the midterms. “You’re going to have a Republican majority in the House and a Republican majority in the Senate,” Mr Gingrich told Fox News on Sunday. “All these people who have been so tough and so mean and so nasty are going to be delivered subpoenas for every document, every conversation, every tweet, every email because I think it’s clear that these are people...
CONGRESS & COURTS・2 DAYS AGO
Newsweek

"This is what it looks like when the rule of law unravels," the Wyoming Republican wrote on Sunday.
CONGRESS & COURTS・2 DAYS AGO

Former Republican Speaker of the House Newt Gingrich warned Sunday of the retribution the GOP could take against Jan. 6 investigators.
PRESIDENTIAL ELECTION・1 DAY AGO
The Independent

The House select committee investigating the Jan 6 attack on Congress is seeking an interview with former Attorney General William Barr following the shocking revelation first reported by Politico that Donald Trump’s allies drafted an executive order directing the seizure of voting machines.Rep Bennie Thompson, the committee’s chairman, made the announcement on Sunday during an interview with ABC News. He added that lawmakers on the panel have spoken with Mr Barr previously in the course of their investigation, but were now interested in learning more about the draft executive order created some time in December of 2020.Appearing on This...
PRESIDENTIAL ELECTION・2 DAYS AGO
Fox News

The Supreme Court Wednesday denied former President Donald Trump's request for a court order to prevent the disclosure of privileged records to the House Select Committee to Investigate the January 6th Attack on the Capitol. The Court noted that the U.S. Court of Appeals for the D.C. Circuit, which upheld...
CONGRESS & COURTS・6 DAYS AGO
Los Angeles Times

Will Jan. 6 committee subpoena McCarthy? Congress could set up a political and legal showdown