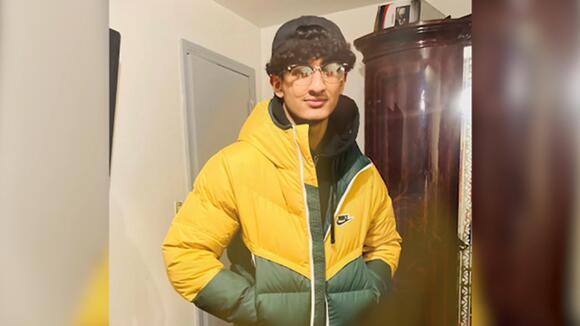 A teenager who was shot in the head while working at his family's business over the weekend has a long road to recovery. Zayid Muthana's father said that his son had surgery to remove the bullet Wednesday morning and into the afternoon. On Tuesday, police released surveillance video of the two men who entered the M&M Grocery on Nostrand Avenue just after 6 p.m. while Muthana was working behind the counter. Police say the 18-year-old noticed one of the suspects was trying to steal something and tried to stop him. That's when the man pulled out a gun and shots were fired. Muthana fell to the ground and was taken to the hospital in critical condition. The 18-year-old was out of surgery by Wednesday evening and is recovering. But his family, who immigrated from Yemen is devastated. They say the teen has big dreams to go into real estate and had been helping at his father's business on the weekends when he's not in school. "He was always working hard, trying to bring food to the table," his father Fahd Muthana said. "I want justice for him, he was a good kid, everybody in the community loves him." The latest shooting is causing great concern for local merchants who say there has been a string of shootings and stabbings at local bodegas. A crowd gathered in front of the deli to pray for Zayid on Wednesday. They are now demanding better police response and more security -- but their immediate focus is the well-being of Muthana. The search continues for the two suspects. Anyone with information is asked to call the NYPD's Crime Stoppers Hotline at 1-800-577-TIPS (8477) or for Spanish, 1-888-57-PISTA (74782). ALSO READ | Cops explain how new DNA technology led to arrest in 1999 cold case

An off-duty officer working security at an Upper West Side Duane Reade shot a suspect who police say had just stabbed a man.
MANHATTAN, NY・16 HOURS AGO
ABCNY

Police say the driver was parked in the Westchester Square section when someone walked up to his vehicle and shot him in the leg.
4 HOURS AGO
ABCNY

Rawleigh Thompson was heading to church on Sunday when a man pushed him from behind onto the subway tracks at the Fulton Street Station, directly in front of an oncoming train.
NEW YORK CITY, NY・11 HOURS AGO

A college student from the Bronx has been indicted for selling 73 weapons and high-capacity magazines to an undercover NYPD officer.
BRONX, NY・2 DAYS AGO

Three teenagers are now facing murder charges in New Jersey for the death of 18-year-old Robert Cuadra, an honor student who was just months away from attending his dream university on a full scholarship.
PATERSON, NJ・7 HOURS AGO
ABCNY

Hundreds of people came to the 32 Precinct on Wednesday night, packing 135th Street in Harlem and standing in the cold, to share the burden for a moment, of a pain that will last a lifetime.
2 DAYS AGO
ABCNY

A 35-year-old man was shot in the arm in the waiting room at Jacobi Hospital in the Bronx Tuesday.
NEW YORK CITY, NY・3 DAYS AGO