Should Atlanta Falcons Give Cordarrelle Patterson His Wish to Defense? 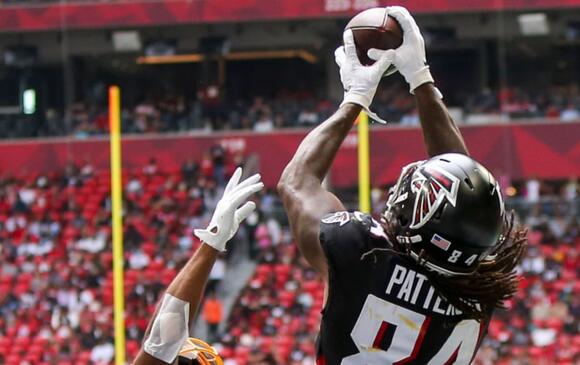 With a win on Sunday over the Jags, the Atlanta Falcons improved to 5-6 on the season.

In each of the team's five wins in 2021, running back Cordarrelle Patterson has recorded 100 yards from scrimmage or scored a touchdown. On Sunday, Patterson double-dipped with a career-high 108 yards and a pair of touchdowns.

He did something else, too, playing one snap on defense.

“He got his defensive snap,” coach Arthur Smith said. “I may put him on the depth chart next week at free safety.''

And indeed, the team’s official depth chart now lists him as a backup safety in addition to his roles on offense (as a runner and receiver) and special teams.

With Patterson injured in the second half of the blowout loss to the Cowboys and on the sidelines during the team's shutout loss to the New England Patriots, it's clear Patterson is the ignition to get this offense in gear. Without Patterson, an argument can be made that there is no offense.

And maybe he could ignite a defense, too?

First things first, though. With Calvin Ridley on the non-football injury list, someone needs to be able to open the offense and activate other weapons. Patterson's presence helped wide receiver Russell Gage contribute, adding six catches for 62 yards and a touchdown .

It's really hard to give the league's MVP award to someone on a .500 team, but when you zero in on the meaning of "most valuable player," Patterson checks that box off for the Falcons. ... and would be happy to check off some more boxes, too.

On this episode of " Locked On Falcons ," host Aaron Freeman shares his takeaways from the Falcons' 21-14 win over the Jaguars in Week 12.

He summarizes the highs and lows of the game, looking at Patterson's career-high day as well as the lackluster play from both Matt Ryan and Jaguars rookie quarterback Trevor Lawrence.

He then hands out his grades for the offense, defense, and special teams before outlining his final thoughts on the Falcons' playoff potential and whether or not this win changed the narrative surrounding the Arthur Smith-led Falcons.

Aaron deals with all that and more on this episode of " Locked On Falcons ." For more podcasts and information, join us here .

Earlier this season, Atlanta Falcons wide receiver Calvin Ridley stepped away from the field to focus on his mental health. According to NFL Network insider Mike Garafolo, this situation involving Ridley’s self assessment has not changed, but the Falcons are still holding out hope that they’ll have their 27-year-old wideout back for the 2022 season.
NFL・2 DAYS AGO
Falcon Report

NFL Network reporter Mike Garafalo believes a trade is in the works for the Falcons and Ridley.
NFL・2 DAYS AGO

Should the Atlanta Falcons entertain a trade for Baker Mayfield?

The Atlanta Falcons will face questions at the quarterback position this off-season after a down year from veteran Matt Ryan. Despite a massive dead cap hit rumors have already swirled around Ryan and the Steelers. Another quarterback that will be facing a lot of questions this off-season is Baker Mayfield....
NFL・2 DAYS AGO
FanSided

The Atlanta Falcons should bring back Thomas Morstead next season

Joining the myriad of issues on the Atlanta Falcons roster was the punter position early on this season. Atlanta couldn’t find a consistent option bouncing between two different punters due to performance and injuries. Injuries forced Atlanta to attempt to find a third option at punter late in the...
NFL・2 DAYS AGO
FanSided

Should the Atlanta Falcons target Ryan’s replacement in the draft?

Matt Ryan’s time with the Atlanta Falcons is closer to the end than the beginning, this we know as the veteran heads into his age 37-season. Sitting with the 8th overall pick in the draft Atlanta has to at least consider whether or not it is time to take a quarterback.
NFL・14 HOURS AGO
Falcon Report

The notion of the Falcons protecting Matt Ryan should be at the forefront this offseason.
NFL・11 HOURS AGO

For an Atlanta Falcons franchise that has had questions seemingly about every position, there is one player who is underappreciated. Whether it is questioning Matt Ryan or wondering if Deion Jones or Grady Jarrett are worth their cap hits few players have escaped blame in the mess that has been the Atlanta Falcons over the last two seasons.
NFL・2 DAYS AGO
Yardbarker

He can line up at wide receiver or he can line up at running back. His name is Cordarrelle Patterson and his versatility would be a dynamic addition to the Jets’ bag-of-tricks offensive attack. Patterson has long been among the most undervalued players in the game. As a former...
NFL・14 HOURS AGO
FanSided

Why the Atlanta Falcons shouldn’t bring back Josh Rosen

The most memorable part of Josh Rosen’s time with the Atlanta Falcons this season happened when the backup came in relief of Matt Ryan in an already ugly blowout loss and promptly threw an interception. This is who Rosen has been throughout his career and why a first-round pick went from being the future for the Cardinals to a panic signing for the Falcons.
NFL・2 DAYS AGO
atlantafalcons.com

Cordarrelle Patterson had a breakout offensive season in his ninth NFL season. That, well, doesn't happen often. Or, ever, really. But a career receiver known best as a return man became a real threat working out of the backfield as a runner and receiver. Even Patterson admits he didn't know...
NFL・10 HOURS AGO

What direction are the Atlanta Falcons trying to go?

The Atlanta Falcons finished the 2021-22 season 7-10, missing the playoffs for the fourth straight year, without any hints of a long-term plan in sight. Sending any aging Julio Jones who was the face of the franchise for a decade to the Titans in exchange for a 2022 second-round pick and a 2023 fourth-round pick.
NFL・7 HOURS AGO
Sportsnaut

Jerry Jones reaction to loss: Dallas Cowboys owner sent a stern message that sure sounded like a direct shot at Mike McCarthy after Sunday’s loss. Let’s spare hyperbole: The Dallas Cowboys playoff loss on Sunday afternoon was nothing short of embarrassing. Dallas entered the postseason with its sights...
NFL・1 DAY AGO
The Spun

FOX NFL broadcaster and former Cowboy great Troy Aikman didn’t seem to be too happy that he and Joe Buck were in Tampa Bay rather than Dallas. As Buck teased the next Sunday NFC playoff matchup between the Cowboys and 49ers on CBS, Aikman voiced his displeasure with some coded language.
NFL・1 DAY AGO
93.7 The Fan

For 18 seasons, Ben Roethlisberger has been the face of the Pittsburgh Steelers’ franchise. He’s earned two Super Bowl titles
NFL・23 HOURS AGO
Sportsnaut

While the Buffalo Bills took the field as favorites in Saturday’s AFC Wild Card Game, many believed the New England
NFL・2 DAYS AGO
USA TODAY

It felt like January 1991 again for Sal Maiorana as Josh Allen and the Buffalo Bills put forth perhaps the best performance in team history.
NFL・1 DAY AGO