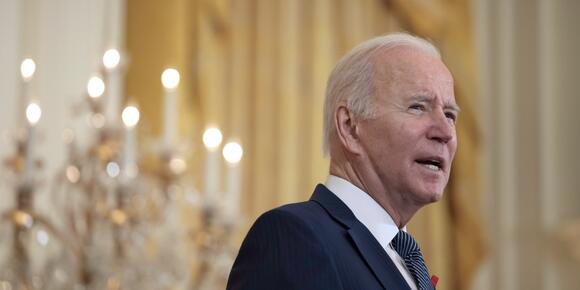 President Joe Biden is using every tool in his arsenal to send a clear message to Americans this holiday season: Don’t pin inflation on me.

Republicans have been working to blame the president and Democrats in Congress for the 31 year-high in the consumer price index in attempts to block Biden’s keystone Build Back Better social spending plan. They're touting high inflation as a pivotal campaign issue ahead of what will be a contentious midterm campaign cycle.

“We’re going to continue to have inflation,” Senator Rick Scott, who chairs the National Republican Senatorial Committee, told The Wall Street Journal earlier this month, “and then interest rates will go up. This is a gold mine for us.”

But Biden isn’t taking the abuse sitting down. In a political move that is out of character for the president, he took to the official POTUS Twitter account to fire back against Scott.

“One Republican Senator said that rising prices were “a gold mine” for Republicans politically,” the president wrote. “Imagine rooting for higher costs for American families just to score a few political points.”

Biden has also delivered a slew of on-camera speeches over the last two weeks touting his economic accomplishments and explaining that he is doing all he can to fight inflation, which has increased by more than 6% year-over-year.

Scott, meanwhile, has put his words into action. Two days after talking to the Wall Street Journal, he blamed Biden for a 15% increase in Medicare Part B premiums. The increase was because of “Biden’s inaction to address the inflation crisis he and Washington Democrats have created with reckless spending and socialist policies,” he said.

The increase, according to Kaiser Health News, was because of high costs of a new Alzheimer’s drug and as a response to a premium freeze last year in response to the COVID-19 crisis.

In hearings with Treasury Secretary Janet Yellen and Federal Reserve Chair Jerome Powell, Republicans spent much time testifying about the impact Biden’s policies (which have not yet been passed or enacted) have had on rising costs.

“It is the administration's agenda that is driving up the cost of things. It’s making the American people worse off, not better off,” said Representative Patrick McHenry (R- N.C.), ranking Republican on the Financial Services panel.

“Y'all won the election. It's your prerogative to ignore Republican concerns. But you went forward with the American Rescue Plan, which we warned would increase inflation,” Representative Anthony Gonzalez (R-Ohio) said. “That's exactly what happened. You're set to repeat the exact same mistake.”

Well-funded conservative groups, meanwhile, are launching large advertising campaigns ahead of the midterm elections to hammer home their inflation message.

Most economists (on the left and right) agree that Biden’s policies have little to do with rising inflation. Analysts at Moody's Analytics and Fitch Ratings say that the bill has no impact on the increasing prices because the money from it won't begin to flow into the economy until 2022, and due to its decade-long rollout and revenue-raising offsets.

In reality, there is little the president can do to tamp down inflation. Biden has used his executive power to ease supply chain problems at ports and he's met with the CEOs of large retailers asking them to stock their shelves quickly to meet demand. He also announced last week that he would release oil from the nation's Strategic Petroleum Reserve, but the impact on gas prices will likely be minimal. “While our actions will not solve the problem of high gas prices overnight,” the president said last Tuesday, “it will make a difference over time.”

He should listen to republicans...NO ONE wants to pay 2 times what they were for everything...I don't care which party you represent!

LyinBiden is the pot calling the kettle black. It is, Josama's socialist party who used Covid to shut America down which hurt Americans. Did they care then? Do they really care that LyinBiden's policies have hurt Americans? No they do not! The socialists are only worrying about mid terms and how they will lose the majority in the house and the senate.

this writer is completely disingenuous. she claims that the bills haven't been enacted or passed, but the next quote from Anthony Gonzalez talks about the Relief Act passed in March. she tries to make the complaints about Build Back Better when it's about Bidens entire agenda. the BBB will only make it worse.

Never miss a story: Follow your favorite topics and authors to get a personalized email with the journalism that matters most to you. President Joe Biden will use a speech in Georgia to endorse changing Senate filibuster rules that have stalled voting rights legislation, saying it’s time to choose “democracy over autocracy.” But some civil rights groups won’t be there, in protest of what they say is administration inaction.
GEORGIA STATE・6 DAYS AGO
Fortune

Never miss a story: Follow your favorite topics and authors to get a personalized email with the journalism that matters most to you. Former President Donald Trump claimed Twitter Inc. “damaged the integrity” of the U.S. election system by banning him from its social-media platform for stoking last year’s insurrection.
POTUS・6 DAYS AGO
Fortune

Walmart is preparing to go big on the metaverse, with its own NFTs and crypto

Never miss a story: Follow your favorite topics and authors to get a personalized email with the journalism that matters most to you. Walmart Inc. is preparing to create its own cryptocurrency and collection of non-fungible tokens, filings with the U.S. Patent and Trademark Office show, setting the stage for meeting its customers in the emerging metaverse.
RETAIL・15 HOURS AGO
Business Insider

"Things are not going well," Romney said Sunday of President Joe Biden's tenure. "And the president needs to stop and reset."
PRESIDENTIAL ELECTION・1 DAY AGO

The MyPillow founder made the remarks at Trump's Arizona rally, where many speakers touted conspiracy theories about the 2020 election.
PRESIDENTIAL ELECTION・1 DAY AGO
Business Insider

The U.S. Senate's only Black Republican is putting forth what he characterizes as a positive response to partisan rhetoric on race that he's best-positioned to rebut
PRESIDENTIAL ELECTION・11 HOURS AGO
Newsweek

Scott made the comments Sunday night as Democrats continue their attempts to open debates on two voting rights acts.
PRESIDENTIAL ELECTION・6 HOURS AGO

For Biden, it's been a year of lofty ambitions grounded by the unrelenting pandemic, a tough hand in Congress, a harrowing end to an overseas war and rising fears for the future of democracy itself.
PRESIDENTIAL ELECTION・23 HOURS AGO
Reuters

WASHINGTON, Jan 17 (Reuters) - The U.S. midterm elections are some 10 months away, but President Joe Biden's administration and allies already foresee a possible scenario in which Republicans take the House of Representatives, the Senate, or both, and launch a series of investigations and attempts to impeach the president.
PRESIDENTIAL ELECTION・12 HOURS AGO
The Guardian

Biden supporters 'apoplectic' one year into his presidency

Just over a year ago, millions of energized young people, women, voters of color and independents joined forces to send Joe Biden to the White House But 12 months into his presidency, many describe a coalition in crisis.Leading voices across Biden's diverse political base openly decry the slow pace of progress on key campaign promises. The frustration was especially pronounced this past week after Biden's push for voting rights legislation effectively stalled, intensifying concerns in his party that fundamental democratic principles are at risk and reinforcing a broader sense that the president is faltering at a moment of...
PRESIDENTIAL ELECTION・2 DAYS AGO

If you were to ask some, they would say that the sky is falling on the Biden administration. With the pathway to Build Back Better now blocked due to Senator Joe Manchin's decision to vote no, and the Voting Rights Act stalled in the U.S. Senate, President Joe Biden’s legislative agenda has been brought to a halt just months before the 2022 midterm election.
PRESIDENTIAL ELECTION・3 DAYS AGO
The Independent

New York Times columnist Tom Friedman is under fire from both Democrats and Republicans on Twitter for proposing a unity ticket for the 2024 election.Specifically, he suggests that President Joe Biden replaces Vice President Kamala Harris with Republican representative Liz Cheney if he runs for a second term.In the opinion column titled: “Biden-Cheney 2024?”, Friedman argues that the US should take inspiration from “the most diverse national unity government in Israel’s history” and come together to get stuff done and mute the “hyperpolarisation” that was making the country “ungovernable”.Not only does he propose a Biden-Cheney ticket, but he also...
PRESIDENTIAL ELECTION・5 DAYS AGO
Washington Post

Biden is failing politically, and not just because of Republican obstruction

President Biden hit a political wall this week in his push for voting rights legislation, just as he did last year in trying to pass his Build Back Better spending package. It’s time for Biden to ask himself why he’s in this morass. Opinions to start the day,...
PRESIDENTIAL ELECTION・4 DAYS AGO
wlsam.com

Former President Barack Obama is calling on the Senate to “do the right thing” and pass voting rights legislation, backing President Joe Biden’s push to change Senate filibuster rules to do so. “Protecting our democracy wasn’t always a partisan issue,” the former Democratic President wrote in an...
PRESIDENTIAL ELECTION・5 DAYS AGO
northwestgeorgianews.com

WASHINGTON — President Joe Biden on Tuesday made an impassioned plea for U.S. voting rights legislation stalled in Congress and said Democratic lawmakers should make a major change in Senate rules to override Republican opposition. Calling it a "battle for the soul of America," Biden put the voting rights...
PRESIDENTIAL ELECTION・6 DAYS AGO