With a shot at No. 1, Bahamas no holiday for Collin Morikawa 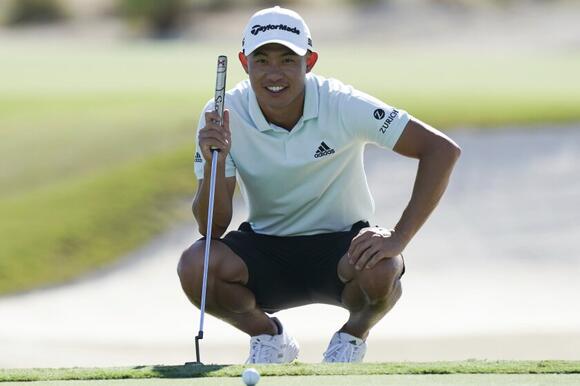 The Hero World Challenge has all the trappings of a working vacation on a Caribbean island with a 20-man field, no cut and warm tropical air in December. It just doesn't feel that way to Collin Morikawa.

A historic year for the 24-year-old Californian can still get better.

At stake for Morikawa this week at Albany Golf Club is a chance to reach No. 1 in the world in only his 61st tournament worldwide as a pro. That would be the second-quickest ascent to the top of the world in golf behind Tiger Woods (21 starts).

None of this seems to faze Morikawa, not after a year in which he won his first World Golf Championship, his second major at the British Open and became the first American to be No. 1 on the European Tour when he won the DP World Tour Championship in Dubai two weeks ago.

And to think it was just over 18 months ago that he picked up his business degree from the University of California at Berkeley.

"I wouldn't call it surprised,” Morikawa said after a pro-am round that included cricket legend Brian Lara. “I set a lot of lofty goals and they're reasonable goals — they're not unreasonable — but I set a lot of high goals and that's just the standard I live up to. It always has been. I just keep pushing myself.”

At the moment, there appears to be no limit for a game already renowned for pure irons and a repeatable swing that rarely gets him too far off course.

U.S. Open champion Jon Rahm chose not to play the holiday event hosted by Woods. According to projections, Morikawa would have to win to reach No. 1, and then the two-year rolling formula would return Rahm back to No. 1 a week later.

Still, just getting there is a big deal. And with this tournament offering world ranking points, this would be as good a chance as any.

“I'm here to win and we're here to play golf,” he said. “You can look at it as a vacation, but at the end of the day I still want to come out here and play really well. And obviously, over the past month-and-a-half it's been some pretty good golf. And hopefully, we can just lean on that to finish off this year and head into 2022.”

The field includes Rory McIlroy, who had a chance to win in Dubai until a bad break and frustration that led to bad shots cost him down the stretch.

Brooks Koepka and Bryson DeChambeau are playing in the Bahamas, this time 72 holes instead of the 12-hole TV exhibition in Las Vegas. They aren't paired together and might not even see each other this week if they can help it.

Jordan Spieth plays his first tournament as a father after his wife gave birth to a boy.

Spieth and McIlroy can relate to Morikawa's rapid rise. McIlroy was 21 when he nearly won the Masters, set the U.S. Open scoring record a year later and then added the PGA Championship at Kiawah Island for two majors at age 23.

Spieth nearly won the Masters at age 20 in 2014, his first full year as a PGA Tour member. The following year, he won the Masters and U.S. Open, was one shot out of a playoff in the British Open and was runner-up in the PGA.

The challenge can be sustaining great play. McIlroy has gone through his share of rough patches, along with injury. Spieth went more than three years without winning and nearly fell out of the top 100 before he got back on track.

“It’s just about resetting your goals, just trying to keep improving as a player, try to not let complacency creep in at any point,” McIlroy said. “I think at times when you get successful and you maybe enjoy a little bit of that success, that complacency can creep in."

The biggest knock on Morikawa, aside from occasional putting lapses, is that his best game has been absent during the PGA Tour postseason each of the last two years. That's more about the fickle nature of golf than any complacency.

He said he doesn't wait until the end of the year to raise the bar. That could be after a tournament (usually a win), but the target is always moving, always within reasonable reach.

“If I had set the bar of saying at 20 years old I wanted to win two majors by the time I finished my career, I'd be complacent, right? I'd just be OK with myself,” he said. “But I'm not. I want to keep winning. I want to keep beating these guys out here.”

McIlroy to take aspects of Woods' game to improve in 2022

Rory McIlroy taking inspiration from Tiger Woods ahead of 2022 season

Rory McIlroy will take a leaf from Tiger Woods’ book as he bids to build on the momentum of his post-Ryder Cup performances in 2022.McIlroy broke down in tears after beating Xander Schauffele to register his only point in Europe’s record 19-9 defeat at Whistling Straits last year, the four-time major winner feeling he “should have done more” in the contest.Three weeks later McIlroy returned to action with a second PGA Tour title of the season at the CJ Cup in Las Vegas and the following month held the 54-hole lead in the DP World Tour Championship before being overhauled...
GOLF・2 DAYS AGO
KESQ

Morikawa could miss cut as winds cause havoc in Abu Dhabi

ABU DHABI, United Arab Emirates (AP) — Collin Morikawa is facing just his second missed cut in 15 months as strong winds off the Persian Gulf caused havoc during the second round at the Abu Dhabi Championship. The No. 2-ranked Morikawa shot 2-over 74 to add to his 73 in the first round. It left the British Open champion on 3 over for the tournament and that was two strokes below the current projected cut. Yet the tough conditions on the links-style course at Yas Links were likely to lead to high scoring for the rest of the day. In-form Viktor Hovland shot 74 and that was 10 shots worse than his first-round score.
SPORTS・12 HOURS AGO
kfgo.com

(Reuters) – Scott Jamieson took a one-shot lead in the opening round of the HSBC Championship in Abu Dhabi after carding an error-free 63 to finish at nine-under on Thursday while world number two Collin Morikawa and four-time major winner Rory McIlroy struggled. Jamieson sank nine birdies and his...
GOLF・1 DAY AGO

Jamieson carded nine birdies in a bogey-free 63 to top the leaderboard at Yas Links Abu Dhabi, with Viktor Hovland birdying three of his last four holes to get to eight under and second spot ahead of Thomas Pieters. Defending champion Tyrrell Hatton and Ian Poulter are both in the...
GOLF・1 DAY AGO
CharlotteObserver.com

Rory McIlroy rolled in a 6-foot birdie putt at the last and was set to join Collin Morikawa in making the cut on the number in a brutal second round at the Abu Dhabi Championship that brought some of the world’s best golfers to their knees Friday. Gusts of...
GOLF・12 HOURS AGO
staradvertiser.com

For Collin Morikawa, a young career full of firsts

Collin Morikawa enters this week’s Abu Dhabi HSBC Championship fresh off an accomplishment no other American golfer has matched. He was the first to win the Race to Dubai, the season-long points race on the European Tour, now the DP World Tour. The HSBC kicks off the tour’s new season.
GOLF・18 HOURS AGO
The Independent

Rory McIlroy neatly summed up the feelings of the windswept field after battling to make the halfway cut in the Abu Dhabi Championship.“I’ve never been so glad to get off a golf course,” McIlroy was overheard saying after he birdied the 18th hole at Yas Links to complete a hard-fought 75 on a day of persistent strong wind and gusts of up to 35mph.McIlroy had been comfortably inside the cut line when he holed from five feet for an eagle on the par-five seventh, but dropped four shots in five holes from the 13th before getting up and down from...
GOLF・6 HOURS AGO

Defending champion Collin Morikawa is 10 strokes off the lead after the first round at the DP World Tour’s Abu Dhabi HSBC Championship after shooting a one-over 73 on Thursday. Scotland’s Scott Jamieson shot a bogey-free nine-under 63 to hold a one-stroke lead over Norway’s Viktor Hovland. Germany’s Thomas...
GOLF・1 DAY AGO
BBC

Collin Morikawa has set demanding targets for 2022, including defending the Claret Jug at the 150th Open Championship at St Andrews in July. The American, 24, won The Open on his debut, as he did when winning his other major, the 2020 US PGA Championship. And as he prepares to...
GOLF・2 DAYS AGO
Tennis World Usa

Waiting for The American Express (event of the PGA Tour which will see Jon Rahm competing in California) and of the Abu Dhabi HSBC Championship (appointment of the DP World Tour which will boast the presence on the field of Collin Morikawa), scheduled from 20 to 23 January, no change at the top of the men's official world golf ranking.
GOLF・1 DAY AGO
SkySports

McIlroy made four bogeys in a five-hole stretch on his back nine at a windy Yas Links, where gusts reached 35mph, before salvaging a final-hole birdie to post a second-round 75 and move back up to the projected cut-mark of three over. The Northern Irishman is joined 10 off the...
GOLF・7 HOURS AGO

ORLANDO, Fla. (AP) – Gaby Lopez of Mexico began a new year and her seventh LPGA Tour season with a simple, and potentially prophetic, Instagram post: “Surprise me, 2022,” she wrote. Lopez jumped out to the lead Thursday in the Hilton Grand Vacations Tournament of Champions, piecing together what she considered a near-perfect opening round […]
HAWAII STATE・22 HOURS AGO
Sportsnaut

Bernhard Langer is the winner of the 2020-21 Jack Nicklaus Award as the Champions Tour’s Player of the Year. The
GOLF・2 DAYS AGO
Sportsnaut

Phil Mickelson smashes DRIVER OUT THE BUNKER at American Express

Phil Mickelson finished bottom of the leaderboard on day one of The American Express after carding a disastrous 6-over 78 - on a day where a video of him crushing his mini driver out of a fairway bunker went viral on social media. Mickelson, who was playing the easier La...
GOLF・17 HOURS AGO

Korda sisters both feel like defending champs as LPGA begins