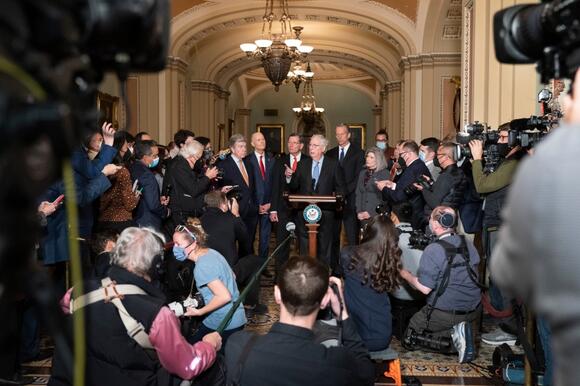 WASHINGTON (AP) — The federal government could be heading for temporary shutdown, with Republicans poised to stall a must-pass funding bill in their effort to force a debate in Congress on rolling back the Biden administration’s COVID-19 vaccine mandates for some workers.

Conservative Republicans in the House and Senate who are opposed to Biden’s vaccine rules want Congress to take a hardline stand against the mandated shots, even if it means shutting down federal offices over the weekend. But not all Republicans are on board. One GOP senator after another left a private lunch meeting Wednesday voicing concern they will be blamed for even a short stoppage of the federal government that will not play well with the public.

Friday is a government funding deadline and the Republican objections — particularly in the Senate, where any single senator can hold up proceedings to stall a vote — could delay passage of legislation needed to keep federal operations running.

Senate Majority Leader Chuck Schumer opened the chamber saying Democrats are prepared to support the funding bill and urging Republicans not to engage in shutdown politics.

“Our Republican colleagues, meanwhile, can either work with us to move the process quickly through the chamber, or they can engage in obstructive tactics that will make a government shutdown almost a certainty,” said Schumer, D-N.Y.

Political backlash over the Biden administration’s coronavirus vaccine mandates has been building for months. The White House sees the vaccinations as the quickest way to end the pandemic that has claimed more than 780,000 deaths in the U.S. Wednesday sparked fresh fears, with the country’s first detected case of a troubling new variant. During the last government shutdown battle in September, Republicans also tried to halt the vaccine mandate.

As the political arguments mount over slapping vaccine requirements on some groups of workers, so too have legal challenges. Courts have been knocking back the Biden administration’s vaccine mandates — including a ruling this week blocking enforcement of a requirement for some health care workers.

For some Republicans, the court cases, along with their own worries about a potentially disruptive government shutdown, are shifting them away from engaging in a high-stakes shutdown.

“One of the things I’m a little concerned about is: Why would we make ourselves the object of public attention by creating the specter of a government shutdown?” said Sen. John Cornyn, R-Texas, a party leader.

On Wednesday, one Republican, Sen. Mike Lee of Utah, made the case to his colleagues to link the effort to halt the vaccine mandates to the spending bill during a private lunch meeting at the Capitol.

The idea is to have the Senate vote to strip funding from the Occupational Safety and Health Administration to implement the Biden administration’s requirement that private employers with 100 or more workers ensure they are vaccinated or regularly tested, senators said.

Lee appears to have backing from a few senators and hardline Republicans in the House. “This is a chance to correct a wrong,” said Sen. Roger Marshall, R-Kan., who launched a similar effort against vaccine mandates during the last government funding battle.

But among most other Republican senators, enthusiasm for a shutdown ran thin.

“I just hate to see a shutdown — shut down the government — because people have been through a lot,” Sen. John Kennedy, R-La., said while exiting the lunch session.

Sen. Mitt Romney, R-Utah, told reporters that with the new coronavirus variant: “There’s too much chaos in our country right now, too much concern about omicron. The last thing we need is more confusion and fear.”

Minority leader Mitch McConnell has been opposed to the shutdown strategy, according to a Republican granted anonymity to discuss private conversations. He did not say a word during the private lunch, but publicly McConnell has been upbeat that there will be no shutdown of the federal government.

“We’re going to be OK,” McConnell, R-Ky., told reporters in the halls of the Capitol.

The Biden administration has pursued vaccine requirements on several groups of workers as it seeks to get more shots in arms to crush the virus, but the effort is facing one setback after another in legal cases.

This week, a federal judge blocked the administration from enforcing a coronavirus vaccine mandate on thousands of health care workers in 10 states. Earlier, a federal appeals court temporarily halted the OSHA requirement that employers with 100 or more workers ensure they are fully vaccinated.

The administration has previously implemented policies requiring millions of federal employees and federal contractors, including military troops, to be fully vaccinated. Those efforts are also being contested in federal courts.

Polling from The Associated Press shows Americans are divided over Biden’s effort to vaccinate workers, with Democrats overwhelmingly for it while most Republicans are against it.

Some Republicans prefer an effort from Sen. Mike Braun, R-Ind., to simply vote to reject the administration’s mandates in a congressional review action expected next week, separate from the federal funding fight.

From the White House, Press Secretary Jen Psaki was confident the government funding bill would be approved by Congress and routine federal operations would not shut down this weekend.

“We have every confidence they will move forward and prevent the government from shutting down,” Psaki said.

She was highly critical of Republicans seeking to prevent the mandates from going into effect.

“These supporters of the former president are advocating for shutting the federal government down, so that 20% of the public who are refusing to get vaccinated or tested can be free to infect their coworkers, our children, filling hospitals,” Psaki said. “They want to shut the government down in order to advocate for people to assert that on society.”

Biden is executive branch and therefore has no CONSTITUTIONAL authority to make regulations. Executive branch is strictly to enforce rules made by LEGISLATIVE (congress) branch. any usurpation to contrary is treason.

WASHINGTON (AP) — The House committee investigating the U.S. Capitol insurrection subpoenaed more than a dozen individuals Friday who it says falsely tried to declare Donald Trump the winner of the 2020 election in seven swing states. The panel is demanding information and testimony from 14 people who the panel says allegedly met and submitted […]
PRESIDENTIAL ELECTION・15 HOURS AGO
WTAJ

President Joe Biden on Thursday formally announced the retirement of Justice Stephen Breyer from the Supreme Court at the end of the term.
PRESIDENTIAL ELECTION・1 DAY AGO
WTAJ

"The Biden Administration has sown nothing but disaster for our country through its illegal, unconstitutional immigration policies," wrote Ken Paxton of Texas.
PRESIDENTIAL ELECTION・13 HOURS AGO
Business Insider

"I think it's going to be awfully difficult for the Republicans, after setting that precedent, to stretch things out," the Vermont Democrat told CNN.
VERMONT STATE・1 DAY AGO
Business Insider

It's been 8 months since the Education Department wrote a memo on Biden's legal ability to cancel student debt. Democrats say it's time to release it.
U.S. POLITICS・2 DAYS AGO

Eyes will be on the two moderate Democrats, who have opposed some of Biden's key legislative priorities and will be needed to confirm his Supreme Court nominee.
PRESIDENTIAL ELECTION・2 DAYS AGO
CNBC

Over 80 House and Senate members wrote a letter to the president urging his administration to release the memo outlining his authority to cancel student debt. The lawmakers, including Senate Majority Leader Chuck Schumer, D-N.Y. and Sen. Elizabeth Warren, D-Mass., also called on the president to immediately forgive $50,000 per borrower.
EDUCATION・2 DAYS AGO
The Independent

Senate Democrats who have played defense for the last three Supreme Court vacancies plan to move swiftly to replace retiring Supreme Court Justice Stephen Breyer using the rapid 2020 confirmation of Justice Amy Coney Barrett as a new standard. Barrett was confirmed exactly a month after then-President Donald Trump nominated her to replace the late Justice Ruth Bader Ginsburg — and just five weeks after Ginsburg’s death in September of that year. Democrats sharply criticized that timeline then, arguing that most confirmations had taken much longer and that Republicans were trying to jam the nomination through in case...
PRESIDENTIAL ELECTION・2 DAYS AGO
Tire Business

WASHINGTON — The Occupational Safety and Health Administration (OSHA) is scrapping its vaccine mandate for large employers, two weeks after the U.S. Supreme Court blocked the requirement from taking effect. The Biden administration issued the mandate in November. It would have applied to employers with more than 100 employees,...
U.S. POLITICS・3 DAYS AGO

"Nearly 10 million children will be thrown back into or deeper into poverty this winter" if the child tax credit isn't renewed, the letter says.
PRESIDENTIAL ELECTION・3 DAYS AGO
POLITICO

Some Assembly Republicans plan to boycott Thursday’s voting session if any members are denied access.
TRENTON, NJ・7 DAYS AGO
WNCT

For companies that were waiting to hear from the U.S. Supreme Court before deciding whether to require vaccinations or regular coronavirus testing for workers, the next move is up to them. Many large corporations were silent on Thursday's ruling by the high court to block a requirement that workers at...
LABOR ISSUES・13 DAYS AGO

As Democrats Rush to Fill Breyer's Seat, Susan Collins Says Not So Fast

"This time, there is no need for any rush," GOP Senator Susan Collins of Maine said of confirming President Joe Biden's forthcoming Supreme Court nominee.
CONGRESS & COURTS・1 DAY AGO
Newsweek

McConnell said he would give Biden's nominee "a fair look" on the same day he warned the president against choosing a judge from "the radical left."
CONGRESS & COURTS・1 DAY AGO
Fox News

The Democratic Party establishment is none too happy with Arizona Senator Kyrsten Sinema. Despite the fact that she votes for President Joe Biden’s agenda north of 95 percent of the time, her state party apparatchiks voted this past week to censure her. This for refusing, along with Sen. Joe Manchin, to go along with scuttling the legislative filibuster to pass the so-called "voting rights" bill.
PRESIDENTIAL ELECTION・1 DAY AGO