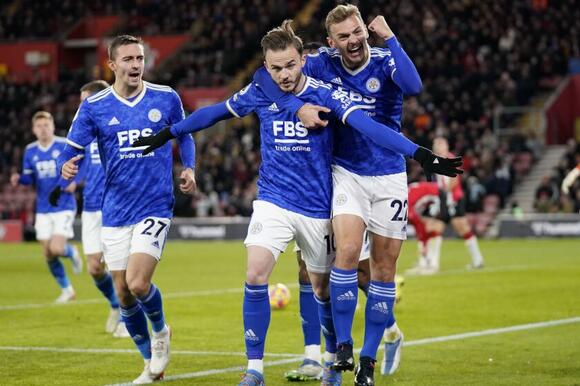 James Maddison scored for the third successive game as Leicester twice came from behind to salvage a 2-2 draw at Southampton in the Premier League on Wednesday.

The creative midfielder collected the ball from Luke Thomas inside Southampton’s crowded 18-yard box and expertly cut inside the sliding Tino Livramento before firing into the net at the near post four minutes into the second half.

Leicester was denied a comeback victory by a combination of exceptional goalkeeping and uncharacteristic profligacy. Jamie Vardy shot over when through on goal, while Harvey Barnes was denied by a fine save from Southampton goalkeeper Alex McCarthy.

Defender Jonny Evans had initially leveled for Leicester in between first-half goals from Saints duo Jan Bednarek and Che Adams.

A point at St. Mary’s moved Leicester up to eighth in the standings but with one win from five.

Southampton has a five-point buffer on the relegation zone in 16th place.

The kick-off for the second half was delayed by around 15 minutes after a fan required medical treatment.

SOUTHAMPTON, England (AP) — Manchester City's long winning run in the Premier League ended at 12 matches on Saturday after a 1-1 draw at Southampton, which took points off the leaders for the second time this season. City needed a 65th-minute header by Aymeric Laporte to earn a point...
PREMIER LEAGUE・1 DAY AGO
The Guardian

A drone interrupted play at Brentford, we had a late, late winner at Old Trafford and Newcastle dug in for victory on an eventful afternoon
PREMIER LEAGUE・1 DAY AGO
The Independent

Manchester City travel to the south coast on Saturday evening to try and extent their lead at the top of the Premier League by beating Southampton.Saints held Pep Guardiola’s men to a goalless draw back in October but today’s visitors have been in scintillating form in recent months, winning their last 12 consecutive league fixtures and building up a lead of 11 points to second-placed Liverpool and 14 to Chelsea in third.Kevin De Bruyne’s superb curling finish was enough to secure victory over the Blues last time out, and the Belgian could start up front at St. Mary’s with Raheem...
PREMIER LEAGUE・1 DAY AGO
The Independent

Manchester City were denied a 13th consecutive Premier League win as Southampton held on to claim a deserved point in a 1-1 draw at St Mary’s.Kyle Walker-Peters stunned the visitors when he finished off a well-worked move by curling home the opener for Ralph Hasenhuttl’s men with just seven minutes on the clock.It took City until the 65th minute to level through Aymeric Laporte, with both Kevin De Bruyne and Gabriel Jesus striking the woodwork as Pep Guardiola’s side searched in vain for a winner.The result leaves the reigning champions 12 points clear of second-placed Liverpool, albeit having played two...
PREMIER LEAGUE・22 HOURS AGO

Pep Guardiola believes record signing Jack Grealish delivered “by far” his best performance in a Manchester City shirt during Saturday’s 1-1 draw at Southampton Playmaker Grealish is yet to consistently hit top form for the Premier League leaders since arriving for £100million from boyhood club Aston Villa last summer.The England international, who has managed only two top-flight goals and a couple of assists this term, was unable to inspire City to victory on the south coast as their remarkable winning run ended at 12 games.He cut a frustrated figure at times and was involved in a first-half flash point with...
PREMIER LEAGUE・9 HOURS AGO
The Independent

Pep Guardiola believes Manchester City’s 1-1 draw at Southampton epitomises the difficulty of defending the Premier League title.Reigning champions City were unable to stretch their winning run to 13 top-flight games after being forced to come from behind at a boisterous St Mary’s.Aymeric Laporte’s 65th-minute header cancelled out a shock early opener from Saints defender Kyle Walker-Peters.But the runaway leaders could not find a winner as they dropped points for the first time since late October, leaving them 12 above second-placed Liverpool albeit having played two games more.Despite the minor setback, City manager Guardiola had no complaints about the...
PREMIER LEAGUE・22 HOURS AGO
The Independent

Follow live reaction as Premier League leaders Manchester City were held to a 1-1 draw at Southampton, bringing their 12-game winning run to an end and offering a slimmer of hope to the chasing pack.Kyle Walker-Peters gave Southampton an early lead thanks to a sublime finish with the outside of his boot on seven minutes. The lively Armando Broja saw a goal disallowed as Southampton continued to cause City problems before Raheem Sterling missed a good chance to equalise when he met Phil Foden’s cross from the left but was unable to beat Fraser Forster.Broja hit the post with a header from close range after the break before City began to pile on the pressure. Kevin De Bruyne and Gabriel Jesus hit the woodwork before Aymeric Laporte arrived at the back post to meet De Bruyne’s cross and get City back on level terms on 66 minutes. It looked as if there was only going to be one winner from there, but Southampton held on to frustrate Pep Guardiola’s side. It leaves City 12 points ahead of second-placed Liverpool, although Jurgen Klopp’s side now have two games in hand. Follow all the latest reaction below:
PREMIER LEAGUE・1 DAY AGO
AFP

Aymeric Laporte spared Manchester City's blushes as the Premier League leaders were held to a 1-1 draw at Southampton, while Manchester United moved into fourth place after Marcus Rashford's last-gasp goal sealed a 1-0 win against West Ham on Saturday. Ferguson was unbeaten in three matches as caretaker boss against Chelsea, Manchester United and Arsenal before Carlo Ancelotti took charge just over two years ago.
PREMIER LEAGUE・1 DAY AGO

As the floodlights flickered and dimmed at Vicarage Road, the light also appeared to run out on Claudio Ranieri’s Watford tenure. Norwich’s win in this crucial relegation six-pointer, delivered by Josh Sargent’s sublime backheel flick and towering header, lifted the Canaries out of the Premier League’s bottom three and dropped Watford into deeper trouble.Sargent’s first Premier League goal on 51 minutes was a brilliant moment of quality that had been desperately lacking until he turned Teemu Pukki’s cross off the underside of the bar. Moments later, play at Vicarage Road was halted for around nine minutes due to a partial...
PREMIER LEAGUE・2 DAYS AGO
The Guardian

On a frustrating evening for the pair of big-name strikers, they once again struggled to show why they were so sought-after last summer
PREMIER LEAGUE・10 HOURS AGO
The Independent

Man City are ‘by far the best’ and have Premier League title sewn up, claims Ralph Hasenhuttl

Southampton manager Ralph Hasenhuttl believes Manchester City already have the Premier League title in the bag ahead of their visit to St Mary’s.Reigning champions City travel to the south coast 11 points clear of second-placed Liverpool following a remarkable 12-match winning run.Jurgen Klopp’s Reds and third-placed Chelsea had threatened to make it one of the most exciting title races in years before significantly falling off the pace in recent weeks.Hasenhuttl, who masterminded a creditable goalless draw at the Etihad Stadium in September, is in awe of the way Pep Guardiola’s relentless side have blown away their rivals.“If it wouldn’t be...
PREMIER LEAGUE・2 DAYS AGO

The Tottenham Hotspur dressing room has been just like fans’ groups in the last two days. The players have been giddily sharing videos of the last few minutes at Leicester City. Of particular joy has been Antonio Conte going to hug a steward, which has naturally been pointed out to the manager.A glee has totally replaced a developing sense of gloom. The fretful questions people around the club had been asking have been totally washed away. They’re no longer wondering whether Conte could really walk, or if this is the most difficult situation he’s walked into.The talk is now only...
PREMIER LEAGUE・1 DAY AGO
The Independent

Brendan Rodgers has backed Leicester to recover after their late nightmare against Tottenham.The Foxes host Brighton on Sunday following Wednesday’s last-gasp capitulation against Spurs Steven Bergwijn scored twice in injury time as Leicester blew a 2-1 lead to lose 3-2 at the King Power Stadium.But Rodgers believe the Foxes will have healed their wounds ahead of the Seagulls’ visit.He said: “There was a 12-second period which changed the narrative of the game.“At the end it’s managing that and that shows this group has so much improvement in them. You suffer when you have a loss like that, it’s painful, but...
PREMIER LEAGUE・2 DAYS AGO
The Independent

Pressure is building on Eddie Howe. The Newcastle United manager takes his team to Elland Road tomorrow to face Leeds United desperately needing a win. The prospect of relegation is growing by the week. There are plenty of points still available and things can change quickly. St James’ Park insiders were talking about the importance of beating fellow strugglers before the 1-1 draw with Watford last week, speaking in terms of a mini-league of the bottom five sides in the table. Leeds were very much in the mix at that point but two consecutive wins for Marcelo Bielsa’s men changed...
PREMIER LEAGUE・2 DAYS AGO
San Diego Union-Tribune

Jonjo Shelvey’s second-half free-kick clinched Newcastle a 1-0 win at Leeds as their Premier League survival bid received a major boost.Shelvey curled home the only goal from 20 yards in the 75th minute and Newcastle were rewarded for their lung-busting effort with just their second win of the season.Eddie Howe’s side were under the cosh for long spells at Elland Road but ran themselves ragged to deny Leeds a third straight league victory and climb to within a point of safety with a game in hand on fourth-bottom Norwich.Back-to-back league wins had lifted Leeds nine points clear of the bottom...
PREMIER LEAGUE・1 DAY AGO
The Independent

Everton caretaker manager Duncan Ferguson empathised with fans who protested after their 1-0 home defeat to Aston Villa after admitting he was “on the floor” after the result.A 10th defeat in 14 league matches – courtesy of Emiliano Buendia’s header in first-half added time – means their 19 points from their first 20 games is their lowest total at this stage since 1997-98.The goal celebrations saw Villa players Matty Cash and recently-departed Everton defender Lucas Digne struck by a bottle thrown from the crowd, with the Toffees announcing after the game that one person has been arrested for throwing a...
PREMIER LEAGUE・1 DAY AGO
Ledger-Enquirer

Wolves on a roll, beat Brentford 2-1 in EPL ‘drone’ game

Ruben Neves scored a late goal to give Wolverhampton a 2-1 victory over Brentford in a Premier League game interrupted for almost 20 minutes because of a drone that hovered above the field on Saturday. Ivan Toney's volley in the 71st minute offset João Moutinho's goal for Wolves three minutes...
PREMIER LEAGUE・1 DAY AGO
The Independent

Liverpool head to Crystal Palace on Sunday afternoon, hoping for a third win in a week to start to put pressure back on Manchester City at the top of the Premier League. Victory for the Reds would leave them nine points adrift of the reigning champions with a game in hand, following their draw with Southampton on Saturday. Jurgen Klopp’s team have rediscovered form of late after a slight stutter, beating Brentford last weekend before dispatching Arsenal in midweek to reach the Carabao Cup final.For Palace, this has undoubtedly been a season of progress and putting into place building blocks...
PREMIER LEAGUE・16 HOURS AGO