Burnley keeps up good record vs. Wolves with 0-0 draw in EPL 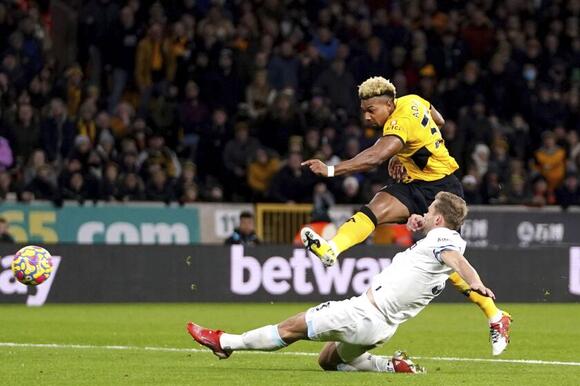 Burnley maintained its impressive record against Wolverhampton by securing a 0-0 draw in the Premier League on Wednesday to make it six matches unbeaten against its opponent.

It was the first time Burnley had played since a thrilling 3-3 draw with Crystal Palace last month, with snow forcing the postponement of its home match against Tottenham on Sunday.

Although a point will not please Burnley manager Sean Dyche too much, his team is proving tough to beat with just one loss from its last eight Premier League games.

Only the top three teams in the league had conceded fewer than Wolves coming into the match and the hosts kept their third straight clean sheet.

However, Wolves' goal drought also continued, as it has netted just once in the last four games.

Burnley stayed in the relegation zone but reclaimed third-to-last place from Norwich. Dyche's team has a game in hand.

The biggest danger Wolves caused Burnley came on the half-hour mark as Adama Traore led a counterattack with his renowned pace.

Raul Jimenez joined him and created a two-on-one situation where the two Wolves forwards were running at Charlie Taylor. Taylor forced Traore wide and the Spanish forward's shot from distance crashed off the bar.

Minute-by-minute report: Josh Sargent scored one of the goals of the season – if not the goal of the season – as Dean Smith’s team swept aside their relegation rivals. Scott Murray was watching.
PREMIER LEAGUE・1 DAY AGO
The Independent

We have had yet another late double gameweek announcement and it is not the one we were expecting.Watford and Burnley will both play twice in double gameweek 23, facing Norwich and Arsenal this weekend respectively, then coming up against each other at Turf Moor on 5 February.Two relegation battlers are not usually candidates for heavy investment so do not be blinded by this double. There are still plenty of others to come, given all the postponements.That doesn’t mean their players aren’t worth some consideration, though.Josh KingBoth King and his strike partner Emmanuel Dennis will be extremely popular this picks this...
PREMIER LEAGUE・1 DAY AGO
The Independent

Sean Dyche is hopeful Burnley’s Covid-19 problems are behind them as he looks forward to Sunday’s match away to Arsenal going ahead.Burnley had to request the postponement of their last two fixtures due to a shortage of players – only 10 were in training on Monday before Tuesday’s match against Watford was called off – but with several returning to Padiham in the past 48 hours Dyche is optimistic the worst is over.“We have a few (cases) but we are looking at bit healthier,” Dyche said. “Looking at the group, we’ve got 16 out there today so at least we’re...
PREMIER LEAGUE・1 DAY AGO

Sean Dyche has urged his offensive players to step up in the fight against relegation but is sure Burnley have more goals in them than they have shown so far this season.With Maxwel Cornet still away at the Africa Cup of Nations and Chris Wood settling in at Newcastle Burnley will head to Arsenal on Sunday with a squad that has scored just six Premier League goals between them so far.Overall, Burnley have scored 16 league goals in 17 games – only Norwich, with 13 in 22, have fewer.That, along with the considerable number of games Burnley have in...
PREMIER LEAGUE・1 DAY AGO
The Independent

We are rapidly heading towards the end of January and Burnley have still played just 17 of their 38 Premier League games. Sean Dyche’s men have only played two league matches since the middle of December due to Covid and injury problems.Burnley currently sit bottom of the table but know positive results in their games in hand could prove vital in their bid to avoid the drop.Meanwhile, Tottenham’s late win at Leicester on Wednesday saw them leapfrog Arsenal, so this match is equally crucial for Mikel Arteta’s side if they are to keep pace in the top four race.Burnley have...
PREMIER LEAGUE・28 MINUTES AGO
The Independent

Arsenal heading to Dubai for training camp after Burnley clash

Arsenal will travel to Dubai after Sunday’s Premier League clash with bottom club Burnley as Mikel Arteta aims to have the “best possible” break to get a fully fit squad.The Gunners are in the mix for a top-four finish this season but have suffered a dip in form with a number of key players unavailable.A mixture of injuries, positive coronavirus cases, suspension and the Africa Cup of Nations has left Arteta with depleted ranks – leading to last weekend’s north London derby at Tottenham being postponed.Burnley have also struggled with numbers of late and the Clarets have not played a...
PREMIER LEAGUE・4 HOURS AGO
San Diego Union-Tribune

Liverpool are through to the Carabao Cup final after beating Arsenal 2-0 on the night and on aggregate.They will face Chelsea at Wembley, after a dominant showing in the semi-final second leg which saw the Gunners end with 10 men after a late Thomas Partey red card.Diogo Jota raced infield to strike home the game’s first goal from the edge of the box midway through the first half, and the Portuguese forward was the star of the show, lobbing in a second to send the Reds clear.Partey had been on the pitch fewer than 20 minutes when he picked up...
PREMIER LEAGUE・2 DAYS AGO
The Guardian

A drone interrupted play at Brentford, we had a late, late winner at Old Trafford and Newcastle dug in for victory on an eventful afternoon
PREMIER LEAGUE・19 HOURS AGO
NESN

Southampton vs. Manchester City EPL Betting Preview: Can The Saints draw up a similair showing in their rematch with City?

The English Premier League’s hopefuls are dropping like flies as we enter Week 23. Chelsea is now a dozen points behind leaders and champions Manchester City as they played twice last week and could not secure a win. Now it looks like only Liverpool poses any threat to Manchester City, and even that gap is growing wide. With one game in hand, Liverpool trails by 11 points and will be hoping against hope for a Manchester slip up against Southampton this Saturday. Is the finely tuned machine of Manchester City due to drop improbable points at St Mary’s? We look at this title race matchup for you here, but you can see all the EPL odds and more at Fanduel Sportsbook.
PREMIER LEAGUE・2 DAYS AGO

Matt Turner's rapid rise could continue with a move to the Premier League.
PREMIER LEAGUE・2 DAYS AGO
The Independent

A match that finally took place, but there was no actual contest. Arsenal, it could be argued, still didn’t really play.Liverpool reached a fifth cup final of Jurgen Klopp’s time, and the first in this competition in six years, by comfortably beating Mikel Arteta’s side 2-0 in the League Cup semi-final second leg. This one wasn’t about false positives but false advertising. It just wasn’t the game that was billed, and certainly didn’t live up the enjoyable chaos that the competition’s semi-finals often offer.Arteta’s side clearly have so much promise but also some way to go, as they lost another...
PREMIER LEAGUE・2 DAYS AGO
The Independent

Marcus Rashford eased the gloom around Old Trafford with a stoppage-time winner as Manchester United snatched a dramatic 1-0 Premier League win over West Ham.Ralf Rangnick’s men looked set for more frustration in a poor quality encounter before Rashford latched onto a neat pass from fellow substitute Edinson Cavani to fire home with virtually the last kick of the game.Cristiano Ronaldo had gone close in the opening period and was denied a penalty appeal as David Moyes’ Hammers began to grow in confidence.Fred had the first shot on target for the hosts in the 49th minute which was well saved...
PREMIER LEAGUE・19 HOURS AGO

It might still be called the Theatre of Dreams by locals and broadcasters alike, keen to talk up another big game and yet another turning point in Manchester United’s meandering, confusing season, but there’s an uncomfortable home truth growing larger by the month.A literal home truth, in this case: Old Trafford is far from a fortress these days. It’s not a place teams tend to fear. More regularly of late, it has been a sounding board of discontent, a map of malaise and a representation of greater issues within the club.United are fast-approaching a fourth consecutive season in which they...
PREMIER LEAGUE・1 DAY AGO
The Independent

Is Watford vs Norwich on TV tonight? Kick-off time, channel and how to watch Premier League fixture

Watford host Norwich under the lights in one of the biggest games of the Premier League season so far on Friday.Dean Smith’s side travel to Vicarage Road off the back of their first win in eight league games as they moved within one point of Watford with a victory over Everton.Now they have the opportunity to lift themselves out of the relegation zone and hand a psychological blow to one of their closest relegation rivals.Watford have drawn one and lost six of their seven league matches since beating Manchester United in November, so are in desperate need of a boost...
PREMIER LEAGUE・2 DAYS AGO
The Independent

Brendan Rodgers has backed Leicester to recover after their late nightmare against Tottenham.The Foxes host Brighton on Sunday following Wednesday’s last-gasp capitulation against Spurs Steven Bergwijn scored twice in injury time as Leicester blew a 2-1 lead to lose 3-2 at the King Power Stadium.But Rodgers believe the Foxes will have healed their wounds ahead of the Seagulls’ visit.He said: “There was a 12-second period which changed the narrative of the game.“At the end it’s managing that and that shows this group has so much improvement in them. You suffer when you have a loss like that, it’s painful, but...
PREMIER LEAGUE・1 DAY AGO