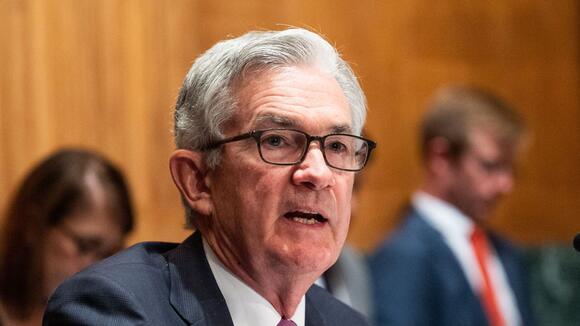 The most recent Beige Book — the Federal Reserve’s publication concerning current economic conditions across the 12 U.S. districts delineated by the Fed — indicates that economic activity grew at a modest to moderate pace in most districts during October and early November.

According to the Fed report released Dec. 1, several districts noted that despite strong demand, growth was constrained by supply chain disruptions and labor shortages. The outlook for overall economic activity remained positive in most districts, but some regions noted uncertainty about when supply chain and labor supply challenges would ease.

Decio Nascimento, CIO of global macro hedge fund Norbury Partners, told GOBankingRates that the economy continues to expand — albeit at a smaller pace than before — as expected.

“Supply chain issues and labor shortages are still weighing on economic growth, but these should get cleared up in the near future and everything points to healthy and strong demand. This report only reinforces our views that next year we will see strong growth and inflation numbers,” he added.

Business picked up in the leisure and hospitality sectors in most districts as the spread of the Delta variant ebbed. Construction activity also showed general improvement, but was somewhat constrained by scarce materials and labor shortages.

Employment and wage growth indicators ranged from modest to strong. The Beige Book report detailed that while there was robust demand for labor, there was also a persistent difficulty in hiring and retaining employees across industries.

Sectors that saw an uptick in employment included leisure and hospitality, as well as manufacturing, but many enterprises were still limiting operating hours due to a lack of staff. Childcare, retirement numbers, and COVID safety concerns were widely cited as negative influences on labor supply.

See: The Labor Shortage May Not Be Because of Unwilling Workers — Here’s Why
Find: Homebuilder Confidence Up Despite Low Inventory, Labor Shortage — What Does It Mean for Consumers?

Finally, prices rose at a moderate to brisk pace, with price hikes being widespread across the broader economy.

“There were wide-ranging input cost increases stemming from strong demand for raw materials, logistical challenges, and labor market tightness ,” per the Fed report. “But wider availability of some inputs, notably semiconductors and certain steel products, led to easing of some price pressures. Strong demand generally allowed firms to raise prices with little pushback, though contractual obligations held back some firms from increasing prices.”

The International Monetary Fund (IMF) cut its global growth outlook for 2022, largely reflecting forecast markdowns in the two largest world economies, the U.S. and China. The impact of the IMF report...
BUSINESS・4 HOURS AGO
GOBankingRates

Following the long-awaited Fed discussion paper about the pros and cons of a potential U.S. central bank digital currency (CBDC) on Jan. 20, Bank of America economic analysts said they anticipate a...
CURRENCIES・1 DAY AGO
GOBankingRates

After the Federal Reserve announced a tightening policy that included interest rate hikes and bond tapering, the stock market -- particularly the S&P 500 and Dow Jones -- began a rapid descent....
BUSINESS・1 DAY AGO
AFP

Federal Reserve Chair Jerome Powell on Wednesday gave a clear signal the central bank is ready to raise US interest rates in March for the first time since cutting them to zero when Covid-19 broke out. "I would say the committee is of a mind to raise the federal funds rate at the March meeting, assuming that conditions are appropriate for doing so," Powell said in an unusually frank comment on the Fed's planned actions.
BUSINESS・44 MINUTES AGO

U.S. stocks benchmarks add to gains, as Federal Reserve, as expected didn't take any action for this meeting, keeping benchmark rates at a range between 0% and 0.25%, but laid the groundwork for a rate increase as early as March.
STOCKS・2 HOURS AGO
MarketWatch

Investors have written off the Fed put.
STOCKS・1 DAY AGO

American consumers were feeling less confident in January amid elevated prices and a Covid-19 resurgence, but their views of the economy and inflation were growing more positive, a survey released Tuesday showed. The Conference Board's consumer confidence index declined to 113.8 in January, less than two points below where it was in December but above analysts' forecasts, with the data showing Americans feeling better about the economy today but less certain about its short-term future. The survey indicated a slight downturn in consumers' expectations for inflation amid a surge in prices across the United States. However the Conference Board's senior director of economic indicators, Lynn Franco, noted "both confidence and consumer spending may continue to be challenged by rising prices and the ongoing pandemic."
BUSINESS・1 DAY AGO
AFP

The Federal Reserve began Tuesday a policy meeting in which central bankers are expected to further signal which weapons they plan to use against inflation and when, amid a selloff on Wall Street. A central bank spokesperson confirmed the beginning of the policy setting Federal Open Market Committee's (FOMC) two-day meeting, which will conclude Wednesday with a committee statement and press conference by Fed Chair Jerome Powell that will be closely followed for signs of what the Fed plans to do to address the surge in US prices. Fears of tighter Fed policy have gripped Wall Street in recent sessions, which saw indices decline throughout last week and end with slight gains in Monday's trading after a session in which indices sank deep into negative territory before rebounding. The Dow, S&P 500 and Nasdaq were all again in the red in Tuesday morning trading, as investors digested a lower global growth forecast from the IMF while waiting for the latest from the Fed.
BUSINESS・1 DAY AGO
USA TODAY

The Federal Reserve's newly aggressive stance on inflation raises concerns that it could move too abruptly and tip the economy into another recession.
BUSINESS・1 DAY AGO
WKRG News 5

Stocks fell sharply on Monday as investors anticipated inflation-fighting measures from the Federal Reserve and fretted over the possibility of conflict between Russia and Ukraine.
STOCKS・2 DAYS AGO
GOBankingRates

Surging prices caused by low supply levels and sudden demand have brought inflation from the near-zero levels enjoyed for nearly a decade to 7% all within the last 12 months. The perfect storm of...
BUSINESS・2 DAYS AGO
FOXBusiness

Bank of America CEO: US economy will normalize in 2023

In an exclusive interview on "Mornings with Maria" Friday, Bank of America Chairman and CEO Brian Moynihan discussed when he believes the economy will normalize following the COVID pandemic recovery. "Our experts have it [the economy] growing at 4% in 2022, but it starts to normalize in 2023," Moynihan told...
ECONOMY・5 DAYS AGO
hubcityradio.com

Inflation’s impact on the US economy explained

WASHINGTON, D.C.(WNAX)- The recent report on the US economy shows inflation rising to at least seven percent, with prices rises on everything from gas to groceries. David Chicoine, former President at South Dakota State University, says it appears the Federal Reserve Board wasn’t prepared for the report. Chicoine, a...
BUSINESS・9 DAYS AGO
FOXBusiness

Inflation is roaring, and King Dollar is snoring even as interest rates rise. The dollar, which has dropped for three straight sessions, has been giving up gains seen after the Federal Reserve has signaled strong interest rate hikes in the coming months. The dollar has dropped to the lowest level against the Euro since November.
BUSINESS・12 DAYS AGO
CBS News

According to the Department of Labor, the Consumer Price Index jumped 7% in 2021. But some economists believe inflation will improve in the coming year. Wall Street Journal reporter Harriet Torry joined CBSN to discuss expert's predictions and possible moves by the government.
BUSINESS・12 DAYS AGO
MarketWatch

Businesses have been able to pass along price gains to their customers, according to the latest Fed Beige Book report released Wednesday.
NEW YORK CITY, NY・14 DAYS AGO
Los Angeles Times

With inflation punishing consumers and threatening the economy, the Federal Reserve this week will probably signal its intent to begin raising interest rates in March for the first time in three years. The Fed's challenges will get only harder from there.
BUSINESS・20 HOURS AGO
MarketWatch