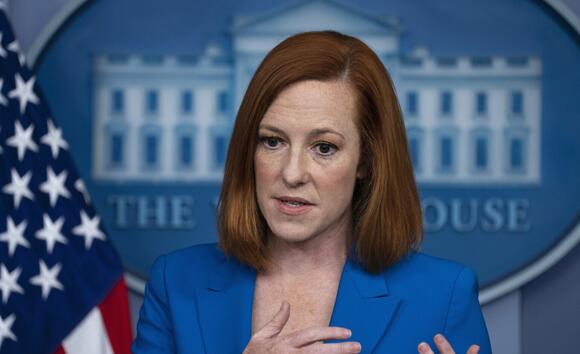 W hite House press secretary Jen Psaki lit into congressional Republicans threatening a government shutdown over vaccine mandates, saying they advocate for those who would "infect their coworkers, our children, filling hospitals" with COVID-19 patients.

"They want to shut the government down in order to advocate for people to assert that on society," she said.

In the Senate, Republican Mike Lee of Utah is leading an effort to delay a bill to extend government funding, which expires at midnight on Friday. A delay could cause a brief and partial government shutdown.

Democrats are siding with the Biden vaccine mandates despite successful court challenges and mounting opposition from Republicans and several workers nationwide. Biden’s mandate has been put on hold in some states due to court challenges, and the administration has suspended enforcement for private businesses, encouraging them to institute mandates on their own.

Psaki also slammed former President Donald Trump and his supporters amid reports he may have tested positive for COVID-19 ahead of the first presidential debate in 2020.

"You have supporters of the former president who withheld information, reportedly, about testing positive and appeared, apparently, at a debate," Psaki said. "They also held events at the White House, reportedly with military veterans and military families ... and they did that without disclosing."

The press secretary attacked Trump again when asked about Biden's statement last year that any president responsible for more than 220,000 virus deaths should not remain as leader of the United States. Fox News's Peter Doocy pointed out that more people have died from COVID-19 under Biden than Trump, asking if the statement still stands.

"The former president was suggesting people inject bleach," Psaki said. "He apparently didn't even share with people he was going to interact with that he had tested positive for COVID himself. He continued to provide a form of misinformation, which probably led to people not taking steps forward to protect themselves ... I think there's a pretty stark difference between their approaches."

Stock trading ban proposals pressure Pelosi, but not all House Republicans on board

There is growing scrutiny of members of Congress trading individual stocks and momentum to ban or limit the practice to avoid conflicts of interest, and House Minority Leader Kevin McCarthy is among those who see an opportunity. But Republicans in the House are divided on the proposed limits even as...
CONGRESS & COURTS・20 HOURS AGO
WashingtonExaminer

One of two centrist Democratic senators opposed to a move by the party to alter the long-standing filibuster condemned the effort in a floor speech Wednesday, calling for lawmakers to instead increase bipartisanship. “I cannot support such a perilous course for this nation when elected leaders are sent to Washington...
CONGRESS & COURTS・14 HOURS AGO
WashingtonExaminer

Amid reports of hostility between Trump and DeSanits, a spokesperson for the Republican governor told Newsweek such talk is a "fabricated media narrative."
POTUS・1 DAY AGO
Denver7 News KMGH

Only one Republican in Colorado’s legislature voted in favor of Democratic-led resolutions urging Congress to pass new voting rights legislation, while more than a dozen voted to approve failed amendments supporting those at the Capitol Jan. 6 and unfounded conspiracy theories about the election.
COLORADO STATE・1 DAY AGO
CBS Pittsburgh

PITTSBURGH (KDKA) — A former ambassador to Denmark is one of two Republican women seeking the nomination for U.S. Senate from Pennsylvania. Carla Sands is joining a crowded field to succeed the retiring U.S. Sen. Pat Toomey. At last count, there are 13 Republican candidates for Senate in this state, including two women, both of whom make the pundits’ list of top five candidates because of their wealth or name recognition. Sands is one of them. “I am a pro-life, pro-First and Second Amendment constitutional conservative woman, and I grew up in Cumberland County in the middle of our great commonwealth,” Sands told...
PENNSYLVANIA STATE・1 DAY AGO
AFP

US senators dealt a death blow Wednesday to President Joe Biden's push to defend voting rights against what Democrats frame as an all-out assault by conservative states targeting racial minorities. Faced with a blockade from Republicans complaining of federal overreach, the ruling Democrats were unable to push through the Freedom to Vote Act and John Lewis Voting Rights Advancement Act passed by the House of Representatives last week. "I am profoundly disappointed that the Senate has failed to stand up for our democracy. I am disappointed -- but I am not deterred," Biden said in a statement posted to social media immediately after the vote. "We will continue to advance necessary legislation and push for Senate procedural changes that will protect the fundamental right to vote."
PRESIDENTIAL ELECTION・9 HOURS AGO

Senators opened an emotional, raw debate Wednesday on voting legislation that Democrats and civil rights leaders say is vital for protecting democracy but that's almost certain to be defeated without a filibuster rules change.
PRESIDENTIAL ELECTION・18 HOURS AGO
The Guardian

Schumer insists Senate will vote on voting rights bill ‘win, lose or draw’ – as it happened

The Freedom to Vote Act and the John Lewis Voting Rights Advancement Act are intended to counter gerrymandering and voting restrictions adopted in some states.
CONGRESS & COURTS・9 HOURS AGO

President Joe Biden, who promised to unite the nation in his inaugural address one year ago, has failed in epic fashion in the eyes of voters, according to a series of year one polls out this week.
PRESIDENTIAL ELECTION・22 HOURS AGO
WashingtonExaminer

President Joe Biden is facing heat after he said during a rare press conference Wednesday that the 2022 midterm elections could be "illegitimate."
PRESIDENTIAL ELECTION・10 HOURS AGO
KRON4 News

Voting legislation that Democrats and civil rights leaders say is vital for protecting democracy appeared headed for defeat as the Senate churned into debate Tuesday, a devastating setback enabled by President Joe Biden’s own party as two holdout senators refuse to support rule changes to overcome a Republican filibuster. The Democratic senators, Kyrsten Sinema of Arizona and Joe Manchin of West […]
PRESIDENTIAL ELECTION・1 DAY AGO

Republicans say they will not comply with a new request from House Intelligence Committee Chairman Adam Schiff that members of the committee show proof of a negative COVID-19 test before joining a regular meeting to conduct business. “Chairman Schiff believes the members of Congress should be tested just to show...
CONGRESS & COURTS・18 HOURS AGO
RNB Cincy 100.3

Rep. Eric Swalwell, a member of the House committee investigating the Capitol riot and a vocal Trump critic, warned that Republicans will "never peacefully concede power again" if they prevail in the midterm elections.
CONGRESS & COURTS・1 DAY AGO
Axios