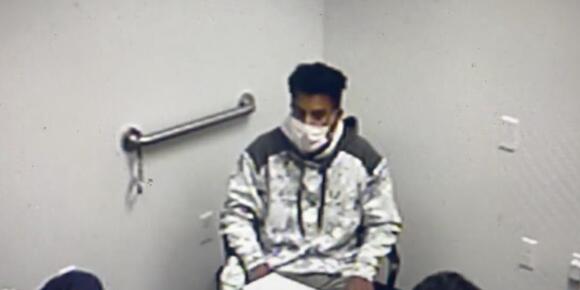 A new viral video is making just about everyone cringe.

In the clip, an emotional alleged MAGA rioter is seen starting to cry in front of FBI interrogators as he is being questioned. When asked about former President Donald Trump calling him to Washington D.C the waterworks

He wrote, “NEW: Court orders release of video of FBI questioning US Capitol breach defendant Daniel Rodriguez. This is a first listen in the interrogation room. He questions election, cites Biden’s rallies and says he’s long been an InfoWars fan.”

The video, which shows Capitol rioter Danny Rodriguez being interrogated FBI about the reason he visited Washington and his part in the United States Capitol attack.

"How did he let you guys know to come to D.C.?" asked one agent, referring to the former president.

MacFarlane added two more videos in the thread, each one every bit as cringey as the last.

“In video of FBI questioning, Jan 6 defendant Daniel Rodriguez says he was ‘trying to find the truth’, through Alex Jones. From video exhibit shown during recent court proceeding in the case.”

Trying to find the truth thru Alex Jones is as smart as finding the new diet at the bottom of a bag of chips.

When do we get see a BLM or Antifa member sitting in that same hot seat for looting, beating up small business owners, burning down cities and torching federal buildings. When?

He will use the " what about defense" the trumpanzees sing every time little baby orangutan gets picked on. 😭

Trump hung up on host Steve Inskeep nine minutes into what NPR said was scheduled to be a 15-minute interview.
PRESIDENTIAL ELECTION・9 DAYS AGO
Salon

A supporter of US President Donald Trump wears a gas mask and holds a bust of him after he and hundreds of others stormed stormed the Capitol building on January 6, 2021 in Washington, DC. (ROBERTO SCHMIDT/AFP via Getty Images) Earlier this week, Jan. 6 insurrectionist Josh Pruitt appeared on...
PROTESTS・14 DAYS AGO
mediaite.com

A Republican state representative from Arizona was in no hurry Wednesday to answer questions about why he signed an inauthentic electoral certificate declaring former President Donald Trump won the state in 2020. As was widely reported Wednesday, state-level Republicans in several contested states sent similar certificates to the National Archives...
ARIZONA STATE・8 DAYS AGO
The Guardian

An ex-campaign staffer claimed Giuliani, others oversaw the plot, saying, "the campaign was throwing enough shit at the wall to see what would stick."
PRESIDENTIAL ELECTION・1 DAY AGO
POLITICO

THE REBOOT — With his agenda stalled in Congress, President JOE BIDEN is switching strategies, “a stark admission that his approach to governing so far has fallen short,” NYT’s Michael Shear, Zolan Kanno-Youngs and Katie Rogers report. “Biden will retreat from the tangle of day-to-day negotiations...
POTUS・1 DAY AGO
The Guardian

(Reuters) - Donald Trump’s lawyers on Monday will try to persuade a federal judge to throw out a series of lawsuits by Democratic lawmakers and two police officers alleging that the former president incited the deadly Jan. 6, 2021, assault on the U.S. Capitol. The three lawsuits, by Democratic...
POTUS・12 DAYS AGO
Newsweek

"The Capitol Police were being beaten and attacked by Trump fans. I think you know that," Ari Melber told the former Trump admin official.
PRESIDENTIAL ELECTION・1 HOUR AGO
MSNBC

January 6th Select Cmte. member Rep. Adam Schiff joins MSNBC's Lawrence O'Donnell to discuss the possibility that, among the Trump White House records that could be uncovered, are outtakes of Trump's infamous January 6th video in which Trump told Capitol rioters, "We love you. You're very special."Jan. 21, 2022.
POTUS・1 DAY AGO
ABC7 Chicago

Trump asks judge to dismiss a lawsuit by Mary Trump

Former President Donald Trump, his sister Maryanne Trump Barry and the estate of his late brother Robert Trump tried on Tuesday to convince a New York judge to dismiss a lawsuit by Mary Trump that accused her family of swindling her out of at least $10 million. Attorneys for the...
PRESIDENTIAL ELECTION・10 DAYS AGO

Ellis tweeted after being served a subpoena by the January 6 Committee investigating the Capitol attack.
POTUS・2 DAYS AGO
Business Insider

Donald Trump has clapped back at at an apparent claim from President Joe Biden that Republicans are afraid not to show support for the former president.
PRESIDENTIAL ELECTION・1 DAY AGO
POLITICO

The senator brushed off his previous phrasing as “sloppy” and “frankly dumb.”
CONGRESS & COURTS・15 DAYS AGO
Newsweek

"We need you guys to step up to the plate, Lindsey Graham, and tell us who you are," Bannon said while calling for the unmasking of five "traitor" GOP senators.
CONGRESS & COURTS・1 DAY AGO
Insider

The judge warned the man — who pleaded guilty to a misdemeanor — not to "fall victim to false gods again" during his sentencing on Wednesday.
PRESIDENTIAL ELECTION・2 DAYS AGO