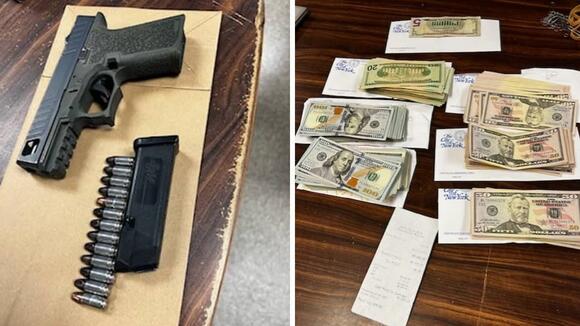 A 17-year-old student was arrested with an apparent ghost gun and cash in his bookbag inside a public school in Downtown Brooklyn. He arrived at the Urban Assembly School for Law and Justice on Adams Street just before noon with the firearm in his bag, officials say. A school secretary saw the weapon and told the dean who alerted school safety agents. They restrained the student and took him into custody. Charges against him are pending. The weapon, which appears to be a ghost gun with no markings, and bullets were recovered. The teen also had about $30,000 cash. The Department of Education released the following statement: "Dangerous items of any kind have absolutely no place in our schools, and our outstanding school staff and School Safety Agents immediately and safely recovered this item shortly after the student entered the school building, ensuring that all students and staff are safe. All protocols were followed, and we are working closely with NYPD regarding follow-up actions." ALSO READ | Cops explain how new DNA technology led to arrest in 1999 cold case

He Will get a Appearance Ticket SMH The Laws in Ny is weak and the Justice System favors Criminals not Civilians!! I Will Pack up and Get out of NY for the Simple Fact NY is a Retreat State Not Stand Your Ground Law! I'm Not Retreating Shhh if Trouble finds Me I'm willing to stand my Ground Not Retreat

I'm more surprised about the money than the gun. $30k in cash? Where did he get that type of money and why bring it to school? I agree with others stating that he was acting on someone's behalf.

my thinking that I am proud of the school as hole pretty muchl love how it was handled God bless every one for the way it unfold.

New Rochelle Detectives were able to locate and arrest a 16-year-old suspect half a mile away after quickly collecting information from the scene.
NEW ROCHELLE, NY・9 HOURS AGO
ABCNY

The 25-year-old gunman wrote his name in the sign-in book before the shooting.
BRONX, NY・3 HOURS AGO
ABCNY

A woman was hospitalized after she was stabbed during a dispute inside a subway station in Harlem Tuesday.
PUBLIC SAFETY・9 HOURS AGO

A 35-year-old man was shot in the arm in the waiting room at Jacobi Hospital in the Bronx Tuesday.
NEW YORK CITY, NY・9 HOURS AGO
ABCNY

A 13-year-old boy was charged with arson, reckless endangerment and criminal mischief for allegedly setting the fire that burned through an East Village card shop earlier this month.
PUBLIC SAFETY・19 HOURS AGO
ABCNY

Police in New Jersey are investigating a disturbing crime in New Jersey in which a 90-year-old women was beaten in her home.
PATERSON, NJ・14 HOURS AGO
ABCNY

NYPD officer Wilbert Mora, who was shot and his partner killed while responding to a domestic call in Harlem, has died from his injuries, NYPD Commissioner Keechant Sewell announced Tuesday.
MANHATTAN, NY・18 HOURS AGO

Detectives believe the victim was shot by a person in the other vehicle, which then fled the scene.
BRONX, NY・3 HOURS AGO
ABCNY

Police in Maplewood and Irvington are investigating a rash of at least nine armed robberies that all occurred on the same day.
MAPLEWOOD, NJ・1 DAY AGO
ABCNY

Officer Sulan, 27, found himself at the scene of another domestic disturbance as an observing officer when his two colleagues were shot.
NEW YORK CITY, NY・1 DAY AGO
ABCNY

Cheng Hsiao and her two children, 3-year-old Ethan and 2-year-old Ian, live in the Towaco section of Montville Township and were reported missing on Sunday.
MORRIS COUNTY, NJ・15 HOURS AGO

A vigil was held outside a police precinct in Harlem Monday night, to represent solidarity between officers and the community after two cops were shot, one fatally, Friday night.
NEW YORK CITY, NY・1 DAY AGO
ABCNY

The 91-year-old victim was discovered unconscious and unresponsive on the first floor after firefighters extinguished the blaze in Bellerose, Queens.
QUEENS, NY・16 HOURS AGO
ABCNY

Police are ramping up their efforts to catch a suspect connected to a shooting that left a baby girl shot in the face in the Bronx last week.
BRONX, NY・1 DAY AGO
ABCNY

John Jay Tashjian was driving on the New Jersey Turnpike when he noticed a car that crashed and landed in tall grass just outside of Newark.
NEW YORK CITY, NY・11 HOURS AGO