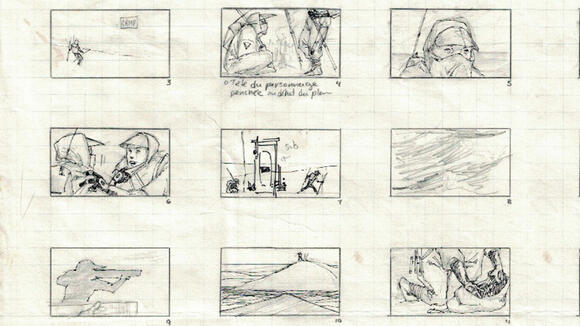 Filmmaker Denis Villeneuve is famous for meticulously storyboarding nearly every shot of his movies during preproduction. On Dune , his epic adaptation of Frank Herbert’s seminal 1965 sci-fi novel, the director spent months dreaming up the story’s visual progression with storyboard artist Sam Hudecki, a fellow French Canadian he has worked with on six films, beginning with Prisoners in 2013.

Says Dune’s production designer, Patrice Vermette, “Denis has different storyboard options for every scene, and he lives with those up on his wall during preproduction — experimenting with the mood, economy of shots and the tempo — until he knows he’s got it exactly right.”

As he shared in this interview with The Hollywood Reporter about his decades-long journey to making Dune , Villeneuve’s storyboarding method stretches to the very origins of his identity as an artist. Growing up in a small village in rural Quebec, captivated by the cinema of Spielberg and others, he knew he wanted to tell visual stories but didn’t have access to a camera. In his early teens, he and a friend, Nicolas Kadima, instead began experimenting by carefully storyboarding movies they imagined making.

“Nicolas was a very good artist, so he did the drawing, and I would tell the stories, and we just created worlds together like that as two kids,” Villeneuve says. The boys had both recently discovered Herbert’s Dune and were obsessed with the story and its world. Thus, Dune became one of their most passionate storyboarding projects — depicting the desert adventures of Paul Atreides among the Fremen and sandworms of Arrakis.

During the lead-up to Dune ’s release, Villeneuve’s brother found the old storyboards in a drawer in their father’s desk. The director later scanned and shared this panel with The Hollywood Reporter.

This story first appeared in a November stand-alone issue of The Hollywood Reporter magazine. To receive the magazine, click here to subscribe .

Ivory Aquino is taking a trip to the DC universe, The Hollywood Reporter has confirmed. Aquino has joined the cast of Batgirl and will appear as Alysia Yeoh, the best friend of Barbara Gordon/Batgirl, the masked hero played by Leslie Grace. Aquino is known for her work in the 2017 LGBTQ rights miniseries When We Rise, which aired on ABC and saw her portray trans rights activist Cecilia Chung. Word of her Batgirl casting has been speculated about online after star Grace shared a photograph of the two of them together in an Instagram story earlier this month. Deadline was the first to...
MOVIES・2 DAYS AGO
The Hollywood Reporter

M. Night Shyamalan on ‘Servant’ Season 3 and Casting Dave Bautista to Lead His Next Film

M. Night Shyamalan is relieved that he gets to finish Servant on his own terms. The Apple TV+ psychological thriller series was recently renewed for a fourth-and-final season, allowing the filmmaker to fulfill the vision he outlined years ago. For a writer-director whose career is defined by his memorable endings, it was always a bit of a risk to tackle a story on a medium that doesn’t guarantee anyone a proper conclusion, but risk-taking has always been a part of Shyamalan’s creative process, especially once he mortgaged his home to fund his 2015 thriller, The Visit. After that $5-million gamble...
MOVIES・1 DAY AGO
The Hollywood Reporter

Denis Villeneuve, this week’s guest on The Hollywood Reporter‘s Awards Chatter podcast (which was recorded in front of an audience at Chapman University), is a 54-year-old Canadian who is now one of a select few filmmakers in Hollywood who makes movies that are consistently embraced by both critics and audiences. After directing his first four features in Canada — three of them were the nation’s submission for what is now known as the best international feature Oscar, and one of which, 2010’s Incendies, was nominated — he began working in the United States. And in just the eight years since, he has, rather remarkably, helmed six major features: 2013’s Prisoners and Enemy, 2015’s Sicario, 2016’s Arrival, 2017’s Blade Runner 2049 and this year Dune, the film that he dreamed of making since he read Frank Herbert’s 1965 sci-fi novel of the same name when he was just 13.
MOVIES・7 DAYS AGO
Variety

Bradley Cooper earned rave reviews for his lead performance in Guillermo del Toro’s “Nightmare Alley,” but the eight-time Oscar nominee was not necessarily the director’s first choice for the job. It was Leonardo DiCaprio, who del Toro originally cast in the role of Stanton Carlisle, a drifter and con artist who rises from lowly carnival worker to a renowned mentalist. Speaking to Mahershala Ali as part of Variety’s “Actors on Actors” series, presented by Amazon Studios, Cooper opened up about replacing DiCaprio and how not being first choice exposed his own insecurities. “‘Nightmare Alley’ was an interesting example of how insecure...
CELEBRITIES・2 DAYS AGO

Bradley Cooper confirmed during a conversation with Mahershala Ali as part of Variety’s “Actors on Actors” series, presented by Amazon Studios, that “Maestro” will finally start filming this May. Netflix’s “Maestro” marks Cooper’s first directorial effort since the blockbuster success of his feature debut, “A Star Is Born.” Cooper also stars in “Maestro” as esteemed Broadway composer Leonard Bernstein, with Carey Mulligan on board to play Bernstein’s wife, Felicia Montealegre. “I wanted to be a conductor since I was a kid,” Cooper told Ali about the new film. “I was obsessed with it, asked Santa Claus for a baton when I...
MOVIES・2 DAYS AGO
Variety

From Timothée Chalamet to Chloe Zhao, Variety’s 10 to Watch Series Has Spotlighted Emerging Talent for 25 Years

For the past 25 years, Variety editors and staff have compiled annual lists of industry talent to look out for, stretching various capacities, including directors, writers, producers, cinematographers, and comics. When looking back on the lists from each year, it’s striking to see how many impactful names have blossomed with hugely successful careers within Hollywood, and with some of the individuals taking a surprising route to stardom. It also underscores the innate ability of the Variety team to discover and take early note of the many talented people who have become entertainment icons over several generations. The first 10 Actors to...
MOVIES・1 DAY AGO
Variety

Bradley Cooper (“Nightmare Alley,” “Licorice Pizza”) and Mahershala Ali (“Swan Song”) sat down for a virtual chat for Variety’s Actors on Actors, presented by Amazon Studios. For more, click here. This season, both Bradley Cooper and Mahershala Ali are pulling off a double act. Cooper’s fans can see him in two period pieces: As the lead of “Nightmare Alley,” in which he plays a tormented mentalist desperate for validation in the 1940s traveling-carnival scene, and as a key supporting player in “Licorice Pizza,” in which he’s a deranged version of the producer Jon Peters. Ali’s double duty is more forward-looking, and...
MOVIES・2 DAYS AGO
Deadline

RLJE Films last night acquired U.S. rights to Riley Stearns’ thriller Dual in a competitive bidding situation, striking a low-mid seven figure deal for the film, which recently premiered in U.S. Dramatic Competition at the Sundance Film Festival. XYZ Films, CAA Media Finance and UTA Independent Film Group closed the deal with RLJE Films, with the former company also handling world rights outside of the U.S. The film is slated for release in theaters this year. Dual centers on Sarah (Karen Gillan), a woman who, upon receiving a terminal diagnosis, opts for a cloning procedure to ease her loss on her friends and family....
MOVIES・2 DAYS AGO

In addition to playing Desi Arnaz in Being the Ricardos and Blanco in The Good Boss, 2021 also saw Javier Bardem appearing in Dune as Stilgar, leader of the Fremen tribe at Sketch Tabr. Ahead of Denis Villeneuve’s latest movie premiering in theaters and on HBO Max, Bardem was hopeful he’d get the chance to reprise the role in a sequel, and luckily for him, his wish came true. With Dune: Part Two officially greenlit, Bardem how has a new request: getting to ride a sandworm in the upcoming movie.
MOVIES・14 DAYS AGO
The Hollywood Reporter

The Good Boss, Spain’s contender for this year’s best international feature Oscar, is a social satire, part workplace comedy, part dark drama, starring Javier Bardem as Blanco, the patriarchal boss of a scales manufacturing company who takes an inappropriate interest in his employee’s personal lives. This is Bardem’s third film with Spanish director Fernando León de Aranoa but their first comedy together. “It was something new for both of us,” Aranoa told THR Presents, powered by Vision Media. “We were looking for a kind of balance, to have the strongest, darkest drama alongside the brightest, broadest humor.” The rare comedic role for...
MOVIES・1 DAY AGO
Popular Mechanics

Denis Villeneuve’s long-awaited adaptation of the sci-fi series Dune crash landed into theaters and living rooms in October 2021, and the crowd went wild. Wild! In his review for Esquire, Chris Nashawaty even went so far as to call the film “the best sci-fi movie of the decade.” Ticket sales at the box office were equally enthusiastic.
MOVIES・2 DAYS AGO

EXCLUSIVE: Musician and filmmaker Flying Lotus has set the sci-fi horror film Ash as his second feature, on the heels of his body horror anthology Kuso, which made its world premiere at the 2017 Sundance Film Festival. The new film, for which the multi-hyphenate will also compose an original score, watches as a woman wakes up on a distant planet and finds the crew of her space station viciously killed, her investigation into what happened setting in motion a terrifying chain of events. Jonni Remmler penned the original screenplay. XYZ Films and GFC Films will produce, with Echo Lake on board as exec...
MOVIES・1 DAY AGO
New Haven Register

With Cannes and the fall festivals in the rearview, the 2021-2022 season brought a feast, as studios (finally!) unleashed their best stuff for the big screen. But the new box office isn’t the old box office, and with less time in theaters, movies don’t have the same cultural impact. Movies with big budgets and established stars are adapting to the multi-platform universe: Studios and streamers spent heavily on costly spectacles that were often available online at the same time as theaters, or shortly after release. Did that make a day-and-date sci-fi epic like “Dune” feel less special? That is the...
MOVIES・2 DAYS AGO