Why Salesforce.com Stock Is Diving Today

Salesforce.com (NYSE: CRM) , at times one of the more popular tech stocks on the market, wasn't too popular on Wednesday. Investors were selling it off following the release of the company's latest set of quarterly results after market hours Tuesday; in midafternoon trading, the stock was down by 9%.

Salesforce actually had quite a successful third quarter of fiscal 2022 by numerous measures. Its revenue landed at $6.86 billion, which was 27% higher on a year-over-year basis and beat the consensus analyst estimate of $6.79 billion. And although non- GAAP (adjusted) net income fell by 22% to $1.27 billion, at $1.27 per share it trounced the collective prognosticator forecast of $0.92. 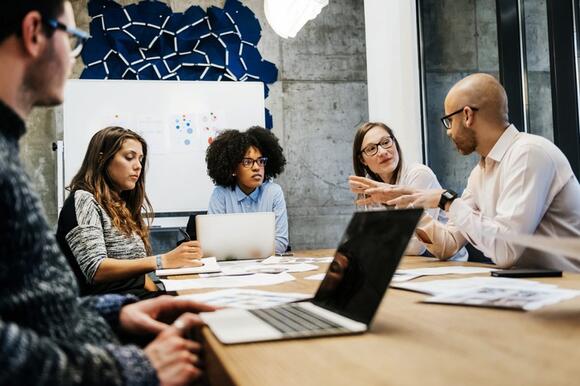 One notable change for the company is that online business messaging service Slack -- bought almost exactly a year ago -- was incorporated for the first time into Salesforce's results.

Slack is clearly an important part of the company's strategy. "During the third quarter, we again executed against the strong demand environment in front of us. Slack saw another strong quarter, and we are pleased with Slack's representation in our largest deals," CFO Amy Weaver said.

Investors tend to look forward, not back, and that was the rub for Salesforce.

The company proffered guidance for this quarter, fiscal year, next quarter, and fiscal 2023. For the current fourth quarter, it's anticipating a roughly 24% slide in revenue. This line item should land at slightly over $7.22 billion to a bit more than $7.23 billion, more or less meeting analyst expectations. However, the anticipated adjusted earnings per share range of $0.72 to $0.73 is well down from the average $0.82 analyst projection.

Finally, it appointed two new members to its board of directors. These are Laura Alber, CEO of Williams-Sonoma , and onetime United Airlines CEO Oscar Munoz. Alber's appointment is effective immediately, while Munoz will begin his tenure on Jan. 1, 2022.

In this volatile market, finding solid businesses at a reasonable price is practically a luxury.
STOCKS・19 HOURS AGO
The Motley Fool

Tesla crushed on earnings -- but also crushed investor hopes for new car models in 2022.
STOCKS・18 HOURS AGO
The Motley Fool

Some of last year's most promising growth stocks have fallen to the single digits right now.
STOCKS・19 HOURS AGO
The Motley Fool

Luckin Coffee and Curiosity Stream are simply too cheap to ignore.
STOCKS・1 DAY AGO

Levi zips up another quarter and puts the final rivet in a strong year.
MARKETS・15 HOURS AGO
The Motley Fool

The flower and gift retailer reported earnings and investors were not at all pleased with the update.
STOCKS・19 HOURS AGO
The Motley Fool

3 Investing Moves to Make During a Stock Market Correction

The right strategy can keep your investments safe during a downturn.
STOCKS・1 HOUR AGO
The Motley Fool

The company might be going private soon.
STOCKS・19 HOURS AGO

Shares of the silver miner plunged yesterday after a company update. And given the drop today, it looks like investors aren't done selling yet.
STOCKS・19 HOURS AGO
The Motley Fool

These three companies are growing fast.
STOCKS・19 HOURS AGO
The Motley Fool

Shares of Hostess Brands got a boost from S&P Dow Jones Indices, which adjusted one of its indexes.
MARKETS・19 HOURS AGO

Bitcoin Falls to Its Lowest Point in 6 Months. Should You Be Worried?

As talk of a crypto winter becomes more common, it's not surprising some investors are feeling uncertain.
STOCKS・18 HOURS AGO
The Motley Fool

It's down almost 20% so far in January, so it would have to meaningfully reverse course.
BUSINESS・19 HOURS AGO
The Motley Fool

The "big money" on Wall Street seems to be dumping Tesla. The question is, why?
STOCKS・1 DAY AGO
The Motley Fool

Why ServiceNow Stock Surged More Than 9% on Thursday

The company recently reported earnings for the fourth quarter and full year of 2021.
STOCKS・18 HOURS AGO
The Motley Fool

The airline is upbeat heading into 2022.
ECONOMY・16 HOURS AGO