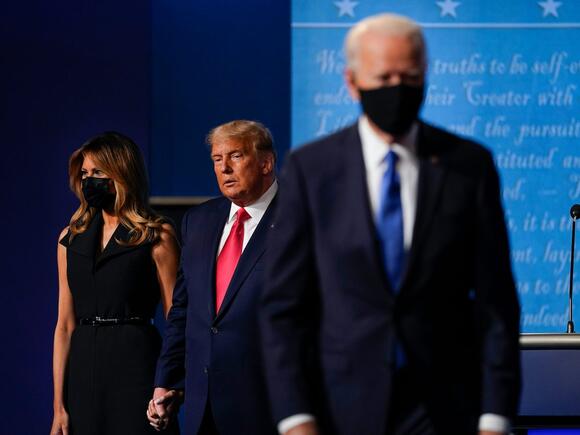 President Joe Biden had a succinct response when asked about a new report that former President Donald Trump tested positive for COVID-19 just three days before the first 2020 presidential debate.

"Mark Meadows has written a book revealing that President Trump tested positive for COVID a few days before your first debate," ABC News' Mary Bruce asked Biden after the president delivered remarks on the economy and supply chain issues on Wednesday. "Do you think the former president put you at risk?"

Biden paused, smiled, and responded: "I don't think about the former president. Thank you."

Biden waved goodbye to the assembled reporters and walked away without answering a shouted follow-up question about whether he knew Trump had tested positive.

Meadows, who served as Trump's final White House chief of staff, reveals in his forthcoming memoir "The Chief's Chief," a copy of which was obtained by the Guardian , that the former president tested positive for COVID-19 on September 26th — three days before Biden and Trump debated at Case Western University in Cleveland.

Meadows recounts in the book how the former president seemed "a little tired" and maybe had a cold on the 26th, but felt well enough to go to a scheduled campaign rally in Middletown, Pennsylvania. But Meadows got some bad news en route.

"Stop the president from leaving," White House physician Sean Conley told Meadows over the phone as Trump was on Marine One. "He just tested positive for Covid."

Trump then, according to Meadows, took a second Binax test on the plane that came back negative. It's not clear exactly how much time passed between the two tests.

The initial positive result was never disclosed to the organizers of the September 29 debate in Cleveland, Ohio, which required participants to test negative 72 hours beforehand, or to the public.

Trump tested positive again just four days later on October 1 as an outbreak of the virus swept through White House following a celebration for then-Supreme Court nominee Amy Coney Barrett that turned into a COVID superspreader.

Trump denied having COVID-19 before the first debate and called his own former chief of staff "fake news" in a Wednesday morning statement responding to the Guardian story. Two former Trump official also confirmed Meadows' account to The New York Times on Wednesday.

"The story of me having COVID prior to, or during, the first debate is Fake News. In fact, a test revealed that I did not have COVID prior to the debate," Trump said.

Trump saying that "a test revealed" he did not have COVID-19 does not disprove Meadows' version of events recounting him initially testing positive.

This is just another blatant lie by Biden by claiming he doesn’t think about trump. If that’s the case why do they bring trumps name up on a daily basis and blame him all the time.

Not surprised about this. Narssacist don't care about right or wrong. They make their own rules. He has a dictator mentality. He was democrat for years and when he couldn't make the democratic ticket to run he jumped on the republican train. Pray for a republican to run that can get things done and has social skills to lead both parties to more compromises. He fuels division and all Americans deserves better than that.

Don’t think? Every policy you make is designed to reject Trump’s policies even though they worked and yours don’t!!

"He will be helpful in winning back House seats," she said Sunday, but predicted "there starts to be a break" after the midterms.
PRESIDENTIAL ELECTION・16 HOURS AGO
Fox News

White House press secretary Jen Psaki was confronted Friday over President Biden's dismissal of a question about the Russia-Ukraine conflict as "stupid," saying he did in fact not dismiss the idea of "proactive deterrence." Biden was caught on a hot mic muttering "what a stupid question" after Fox News correspondent...
PRESIDENTIAL ELECTION・2 DAYS AGO
Fox News

Senate Judiciary Committee member Lindsey Graham, R-S.C., told Fox News that earlier Friday he met with former President Donald Trump and that the two had a frank discussion about the state of the country. Graham told "Hannity" that both agreed President Biden has been a disaster as commander-in-chief, and that...
POTUS・2 DAYS AGO
Newsweek

Most analysts believe Republicans are well-positioned to take back control of the House in the midterms.
CONGRESS & COURTS・2 DAYS AGO

"Black people voting is simply not a priority for Biden, Manchin or Sinema," the radio host said on his Thursday broadcast.
PRESIDENTIAL ELECTION・2 DAYS AGO
Newsweek

The column called the GOP congressman an "obstructionist" on the 1/6 probe and slammed his "contempt for the truth."
OHIO STATE・1 DAY AGO
USA TODAY

Joe Biden has had a rocky year in office. But, folks, this is only the first quarter.

In the end, presidents are graded not on how they start but how they finish.
PRESIDENTIAL ELECTION・22 HOURS AGO
Newsweek

"The Capitol Police were being beaten and attacked by Trump fans. I think you know that," Ari Melber told the former Trump admin official.
PRESIDENTIAL ELECTION・1 DAY AGO

While Biden has said he plans to seek another White House term, Trump has not confirmed that he'll enter the race.
PRESIDENTIAL ELECTION・2 DAYS AGO
Newsweek

There was a moment at the first Trump-Biden debate, on September 29, 2020, in Cleveland, when the contours of the American future were laid bare.
PRESIDENTIAL ELECTION・56 MINUTES AGO
POLITICO

“I get along great with Ron,” Trump said.
POTUS・2 DAYS AGO
Pennsylvania Capital-Star

At the end of his first year, it’s Biden versus his implacable foes | Dick Polman

Fairly or not, voters generally have a what-have-you-done-for-me-lately attitude. Republicans are capitalizing. The post At the end of his first year, it’s Biden versus his implacable foes | Dick Polman appeared first on Pennsylvania Capital-Star.
PRESIDENTIAL ELECTION・26 MINUTES AGO

How should one feel about the first year of the Biden presidency?. I can’t really say I’m disappointed, since I didn’t have high hopes going into it. But I do feel dread. This last year has felt a bit like being trapped in a nail-biting intermission between two horror films. The opening instalment consisted of Donald Trump’s first four years in office – it ended with the cliffhanger of a deadly plague and a surreal, poorly executed, but still terrifying ransacking of the Capitol. The sequel practically writes itself, as the man ascends to power a second time, even more emboldened and determined to hold on to power.
PRESIDENTIAL ELECTION・3 DAYS AGO
The Independent

Trump may endorse rival GOP candidates for midterms, report says: ‘I get two chances to win’

Former President Donald Trump may be reversing course on his previous endorsement strategy in which he was extremely selective about who he would back in Republican primary races. Instead, sources speaking with Politico claim the former commander-in-chief is handing out endorsements to rival candidates to ensure he backs the winning horse. According to the insiders who spoke with Politico, Mr Trump is growing distrustful of his advisors, who he relies on to guide him when he considers endorsements. "He's at times suspicious of the recommendations that people give him when he knows they're being paid," one of the advisors...
PRESIDENTIAL ELECTION・2 DAYS AGO
Newsweek

Pelosi defended congressional stock trading, stating that the U.S. is a "a free-market economy" and that lawmakers "should be able to participate in that."
POTUS・3 DAYS AGO
The Independent

Rudy Giuliani and other Trump campaign officials were involved in overseeing efforts in December 2020 to put forward illegitimate electors in seven states, according to US media reports.The news comes just days after the House select committee investigating the 6 January Capitol riot issued a subpoena to Mr Giuliani.CNN and The Washington Post, citing party leaders and campaign officials who wished to remain anonymous, reported on Thursday on the steps the Trump campaign had taken to try and overturn Joe Biden’s victory in the 2020 US presidential elections.The illegitimate electors were put forward in Arizona, Georgia, Michigan, Nevada, New...
PRESIDENTIAL ELECTION・2 DAYS AGO

The more critical I become of Joe Biden's bumbling presidency, the more often I get the question of whether I regret not supporting Donald Trump in the 2020 election. Nope. No regrets. I'm still not missing Trump. Still think his extreme lack of honor and his low-rent character made him unsuitable to serve as president of the United States. Still glad he was dragged kicking and screaming out of the Oval Office. Still think had he won the election he very well could have destroyed the Republic. (And, by the way, I believe the same of Biden, if he gets his way with Congress).
PRESIDENTIAL ELECTION・1 DAY AGO
madison

The more critical I become of Joe Biden’s bumbling presidency, the more often I get the question of whether I regret not supporting Donald Trump in the 2020 election. Nope. No regrets. I’m still not missing Trump. I still think his extreme lack of honor and low-rent character...
PRESIDENTIAL ELECTION・1 DAY AGO
The Guardian

A 'brutal crosscurrent': Why Biden's immigration policies are making everyone mad

Immigration advocates' frustrations with President Joe Biden have ballooned as he continues Title 42 and "Remain in Mexico" policies along the border.
PRESIDENTIAL ELECTION・2 DAYS AGO