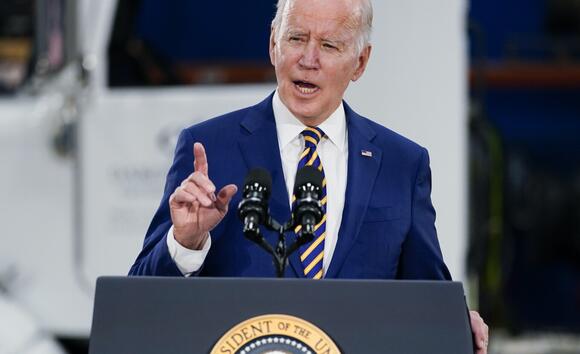 Biden visited Minnesota for the first time as president to speak about his infrastructure agenda. Demonstrators were seen holding pro-Trump and anti-Biden signs and flags as the presidential motorcade passed by.

Some signs read "FJB," an abbreviation for the phrase "F*** Joe Biden."

“A less coded version just outright said ‘F*** you Biden’ with the U in the F word cleverly drawn to look like a middle finger,” according to a report . “A real middle finger attached to a somewhat rough-looking middle-age man with a beard was upraised as motorcade passed."

Similar recent protests have followed Biden around the country. He was greeted by hundreds of protesters during his trip to Idaho in September. Biden visited the state to speak to local leaders about combating wildfires and pushing his economic agenda.

Protesters were heard chanting “traitor,” “smell my hair,” and “Joe Biden sucks” at the president when he arrived.

We all know the election was stolen and Biden is not president!! He’s a fake president with a 30% approval rate.

Congratulations Minnesota , give the miscreant the welcome he deserves . We must stop his and the liberal Democrats insanity , 🖕joe biden.

They bullied us into a fake election and Biden has failed at every thing he's done so far from mismanaging the Afghanistan withdrawal to using tax money to fund a complete transition of American transportation to electric vehicles. His mental decline is obvious and his ability to handle foreign affairs is frightening.

Neither of Donald Trump's impeachment trials led to his conviction, which would have prevented him from returning to the White House. Rep. Jamie Raskin has another idea on how to bar the former president.
POTUS・14 HOURS AGO
The Independent

One QAnon follower said: "When he came out…I instantly felt it was not him. I kept trying to convince myself that it was."
ARIZONA STATE・22 HOURS AGO
Business Insider

The U.S. Senate's only Black Republican is putting forth what he characterizes as a positive response to partisan rhetoric on race that he's best-positioned to rebut
PRESIDENTIAL ELECTION・19 HOURS AGO
Daily Mail

Florida Lieutenant Governor Jeanette Nuñez took aim at President Joe Biden on Sunday, claiming his 'disastrous' policies are driving Hispanic voters out of the Democratic Party. She made the comments in an interview with Fox & Friends, less than a year until the midterm elections that will decide who...
PRESIDENTIAL ELECTION・1 DAY AGO

Former president Trump said that President Biden had made Dr. Anthony Fauci "like a king" during comments to supporters.
ARIZONA STATE・1 DAY AGO
The Guardian

Puzzle of Biden’s unpopularity has some pieces within his control and some not, experts say, as Covid casts a shadow over his first year in office
PRESIDENTIAL ELECTION・1 HOUR AGO
Newsweek

The MyPillow founder made the remarks at Trump's Arizona rally, where many speakers touted conspiracy theories about the 2020 election.
PRESIDENTIAL ELECTION・1 DAY AGO
AFP

US President Joe Biden came in facing extraordinary challenges: a nation divided after the Donald Trump years, the Covid pandemic, and an economy in tumult. And he promised Americans a lot: to heal the country's democracy, defeat Covid, address deep-rooted racial and economic problems, and restore US standing around the world. How did he do?
PRESIDENTIAL ELECTION・6 HOURS AGO

Supporters of former president Donald Trump allegedly received orders to march into the Michigan Capitol in Lansing from the Republican leader's campaign.A group of supporters "contemplated" working with a Republican lawmaker who had a Capitol office to get the 16 Trump electors inside the elector room where the official count was taking place, The Detroit News reported."...(W)e convened and organised in the state Capitol, in the city of Lansing, Michigan, and at 2.00 pm Eastern Standard Time on the 14th day of December 2020," said a false certificate signed and submitted to the National Archives.The supporters who signed the documents...
PRESIDENTIAL ELECTION・2 HOURS AGO
Newsweek

In August 2018, CNN discovered that a White House speechwriter, Darren Beattie, spoke at a conference alongside well-known white nationalists. He was asked to resign, but he refused, prompting the Republican White House to fire Beattie soon after. But as regular readers may recall, Team Trump wasn't quite done with...
PRESIDENTIAL ELECTION・16 HOURS AGO
Newsweek

Clifford Meteer likened Ashli Babbitt's death on January 6 to a "murder" in the Capitol and said it was a patriot's duty to "rattle the cage."
PROTESTS・14 HOURS AGO

"I think anyone with common sense would be reluctant to go talk to this committee," the GOP congressman said.
CONGRESS & COURTS・1 DAY AGO
WCCO News Talk 830

Gazelka on Biden 2020 win: "I only focused on Minnesota."

He can only speak for Minnesota. That’s what Minnesota Senator Paul Gazelka says about the 2020 election. The Republican candidate for governor was asked by WCCO’s Chad Hartman whether Joe Biden beat Donald Trump fair and square.
MINNESOTA STATE・9 HOURS AGO
Newsweek

"100 Seats, 100 Years," he added on Gettr, referring to the century of political domination he argues will begin with the midterms.
ARIZONA STATE・1 DAY AGO
Newsweek