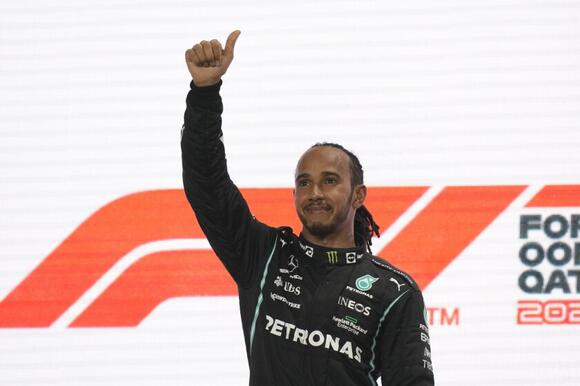 Last race: Seven-time series champion Lewis Hamilton started from the pole in Qatar and was never threatened in his second consecutive victory.

Fast facts: Hamilton now trails points leader Max Verstappen by just eight points with two races remaining. ... Carlos Sainz Jr. (7th in points) and Antonio Giovinazzi (18th) are the only drivers to have been running at the finish in all 20 races. ... Verstappen has led 620 laps; the rest of the drivers to have competed this season have combined to lead 569.

Last race: Daniel Hemric made the first victory of his career a good one, beating reigning champion Austin Cindric to win the championship.

Mercedes have warned their rivals they could face “a terribly painful year” due to the new rules implemented by Formula 1 for the 2022 season.Chief technical officer James Allison insists some may misinterpret the new F1 rules, which are designed to increase overtaking opportunities with the cars revolutionised aerodynamically. Mercedes continue to prepare for the new season with only new driver George Russell confirmed for 2022 as speculation remains over Lewis Hamilton’s future in the sport.And Allisson believes a team could fail to address a key area of the car design and ultimately be left behind.“Putting my fan’s hat on...
MOTORSPORTS・2 DAYS AGO
Insider

"It's all part of the drama," an unnamed source told The Telegraph. "He's got 50 million reasons for staying."
MOTORSPORTS・1 DAY AGO
motorsportmagazine.com

The Singapore Grand Prix will remain on the Formula 1 calendar for at least another seven years, after organisers signed a contract extension to host the race until 2028. New measures to cut the carbon footprint of the night race have also been announced, including a switch to renewable energy and the use of more sustainable materials in the construction of the Marina Bay street circuit.
MOTORSPORTS・1 DAY AGO
The Independent

Max Verstappen and Red Bull relationship ‘worth more than any contract’

Christian Horner maintains Red Bull’s relationship with Max Verstappen is “worth more than any contract” after the team successfully helped the Belgian-Dutch driver to win the Formula 1 world championship.Since Daniel Ricciardo left at the end of 2018, Verstappen has been Red Bull’s priority, ahead of teammates such as Pierre Gasly, Alex Albon and now Sergio Perez.And the 24-year-old has already confirmed his allegiance to Red Bull and hopes to extend their partnership for many more years since joining in 2016.“I said on the radio on the in-lap [in Abu Dhabi], I want to do this with this team...
MOTORSPORTS・2 DAYS AGO

Formula One has agreed a deal to keep the Singapore Grand Prix on the calendar for the next seven years, with an extended contract running from 2022 to 2028. While racing was not possible at the Marina Bay Street Circuit in 2020 and 2021 due to the coronavirus pandemic, the race will return later this year.
MOTORSPORTS・1 DAY AGO
The Independent

New F1 rules presenting ‘landmines’ for Mercedes ahead of 2022 season

Mercedes technical director James Allison has predicted that some Formula 1 teams will have “painful seasons” as they struggle to adapt to overhauled regulations.In a bid for more competitive and exciting racing, F1 have revamped car and aerodynamic rules ahead of the 2022 season.Teams have been forced to entirely redesign their vehicles, with the scale of the changes required leaving Allison fearing that some constructors may have got their preparation “badly wrong”.“The ruleset is not only enormous - the regulations are about twice the size of what’s preceded them - but they’re all almost entirely different from what came before...
MOTORSPORTS・2 DAYS AGO
The Independent

Fernando Alonso has admitted he has “lost a few things in life” due to his long career in Formula One as the Spaniard prepares for a 19th season in the sport. Alonso, 40, is a two-time world champion and returned to the grid last season with Alpine following a two-year break. He finished tenth in the drivers’ championship and claimed a first podium position in seven years when he finished third at the Qatar Grand Prix. The former Renault, McLaren and Ferrari driver took part in other motorsport events such as the Indianapolis 500, Le Mans and the Dakar...
MOTORSPORTS・2 DAYS AGO