The Panthers on The Winning Prowl 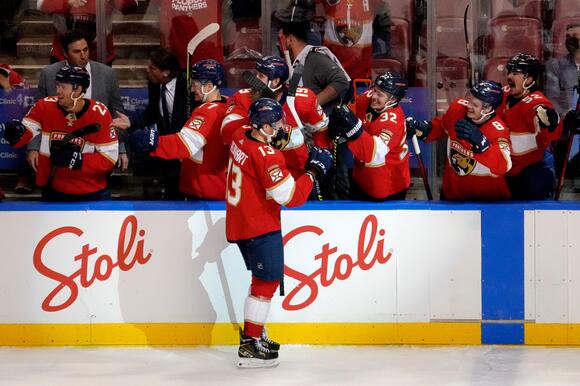 The Panthers looked dead on the ice last night when they entered the 3rd period down 4-1 then they came back to win. Randy Moller was part of the TV announcing team and says, “My toes are still tingling.”

Even though things looked bleak, Moller did not doubt claiming, “You did not sense the doom and gloom.”

Moller says do not ever count The Panthers out because, “They have the confidence in their offense.”

Sergei Bobrovsky has played great this year but Moller explains what distinguishes him saying, “It is about the saves at a critical time in the game.”

Another thing that makes the team good according to Moller is, “The Panthers have depth and role players.”

He adds, “Barkov and Duclair can take their time to get healthy because of the good depth.”

The Panthers did have to face a legend last night in Alexander Ovechkin and he does not seem to be slowing down this season but Moller notes, “When you get older, you do not lose your skill, you lose your desire.”

Ovechkin is playing great but not last night so Moller proclaims, “Kudos to him and kudos to The Panthers, they shut him down.”

Moller’s biggest take away from last night was not on the ice, saying, “Happy for those fans, they had a blast at FLA Live Arena.​

The Carolina Panthers had one of the most bizarre quarterback situations in the league this year. They started off the year as hot as any team led by Sam Darnold, who slipped into a slump and then suffered an injury that kept him out for an extended period. During that time, the Panthers brought back Cam Newton, who was then thrust into a two- and sometimes three- quarterback rotation with Darnold and backup P.J. Walker when all three were healthy and active. Newton’s age and concerns about his ability raised questions about if he would be in Carolina next season. Panthers GM Scott Fitterer addressed those concerns with a brutally honest take on Newton’s future during an appearance on WFNZ’s The Clubhouse with Kyle Bailey.
NFL・2 DAYS AGO
Sportsnaut

Chicago Blackhawks defenseman Calvin de Haan was fined $2,500 by the NHL on Friday for a dangerous trip against Montreal
NHL・2 DAYS AGO
middlebury.edu

Middlebury's growing winning streak hit 11-straight on Saturday, as the Panthers earned a 78-64 NESCAC road win at Bowdoin. Middlebury (13-2, 4-0) heads to Plymouth State for a non-conference match-up on Tuesday with a 6:00 p.m. tip-off. The Polar Bears (9-6, 0-2) led in the opening minutes, jumping out to...
MIDDLEBURY, VT・1 DAY AGO

Panthers hold on for district win over Bruins

Trey Durbin delivered when Elizabethtown needed it most Friday night in Cecilia. Facing Central Hardin, the Panthers had led for much of the game, but had spent much of the fourth quarter locked in a back and forth battle with their 17th District rival. After Ayden Evans tied it with...
ELIZABETHTOWN, KY・1 DAY AGO
San Diego Union-Tribune

The Tampa Bay Lightning continue to win without exceptional special teams play, but their power play and penalty kill are
NHL・2 DAYS AGO
The Northeast Mississippi Daily Journal

NETTLETON – With a short-handed bench and down one starter, Amory had to rely on leading scorer Charleston Wallace even more in its division rivalry game against Nettleton on Friday night. Wallace came through with a career-high 34 points as the Panthers knocked off Nettleton 73-70 in overtime to...
NETTLETON, MS・2 DAYS AGO
NewsOne

The jersey retirement ceremony will take place on the anniversary of his NHL debut.
NHL・22 HOURS AGO

Cowboys running back Ezekiel Elliott told reporters after the team’s 23-17 Wild Card round loss to the 49ers that he played this season with a partially torn PCL.
NFL・18 HOURS AGO
Sportsnaut

Ross Colton scored the tiebreaking goal on a breakaway in the third period as the host Tampa Bay Lightning topped
NHL・1 DAY AGO
thecountyline.net

The Royall boys basketball team hosted Cashton in a conference matchup Friday, when the Eagles used their height for a…. This content is for County Line Monthly and County Line Yearly members only.
CASHTON, WI・1 DAY AGO
gojsutigers.com

Team Effort By Tigers Leads To Win Over Panthers

JACKSON, MISS - It was a total team effort by the Jackson State men's basketball team on Saturday evening as they put an end to its three-game losing conference skid by having four Tigers score in double figures which led to a 75-64 victory over Prairie View A&M inside the Lee E. Williams Athletic and Assembly Center.
JACKSON, MS・1 DAY AGO