Stephen A. Smith destroys the Steelers: 'You're a national embarrassment' 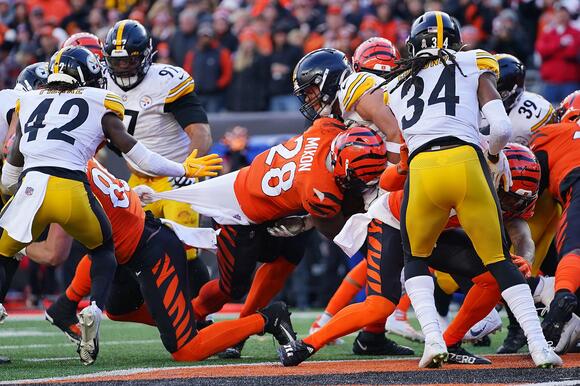 The Steelers are on Stephen A. Smith’s bad side. On Wednesday’s edition of “First Take,” the pugnacious commentator ripped into them, decrying some of the players’ unwarranted nonchalance.

“You are a national embarrassment this week,” Smith said. “You got your ass kicked. You got embarrassed. You got obliterated. And you got punk’d. Period.”

Smith joins a chorus of ex-Steelers who are ripping their former team following its 31-point loss to the Bengals. Ryan Clark led the charge , saying he doesn’t even recognize the Steelers anymore.

“They’re not my beloved Steelers anymore. Nobody is scared to play this team,” he said. “There’s absolutely no physicality. There’s no energy defensively. There’s no tone setters. You have one of the best playmaking free safeties in football in Minkah Fitzpatrick, and you know what he is? He’s a fifth linebacker, because you can’t tackle anybody in the run.”

While Clark took specific issue with the Steelers’ lack of physicality, Smith honed in on Chase Claypool and his request for music to be played during practice.

“Nobody is having a season to brag about,” said Smith. “And you allow a reporter to be in the position to go to the head coach and talk about how you think music should be played in practice? If I were Mike Tomlin, I would have Claypool running sprints the entire practice. You’ve gotta be kidding me.”

Cam Heyward and Ben Roethlisberger also didn’t take kindly to Claypool’s advice. Roethlisberger said he used to defend the team’s “no music in the locker room policy,” (a rule the players put in place because they wanted to be able to pay attention if owner Dan Rooney walked into the locker room) but admitted he’s softened in recent years. Music is now played in the Steelers’ locker room.

Maybe instead of listening to top-50 hits, they should listen to Smith’s rant. He totally laid into them.

“You’re lucky you’re in practice. You’re lucky you’re allowed to touch a football. You’re lucky that Mike Tomlin doesn’t have ya’ll running sprints,” Smith said. “You don’t get punk’d like that by anybody, let alone a division rival like the Cincinnati Bengals. You ain’t tough, you come across soft, ya’ll are inefficient. You’ve got a quarterback who needs to retire and doesn’t want to admit it. You’ve got an offensive line that probably don’t even know each other’s name. You’ve got a defense that’s completely dispirited, and their offense won’t do anything, so they’ve got to do everything. This is not funny. This is not a joke.”

“You guys are horrible,” he said.

The prosecution rests its case.

Stephen A. Smith Has Brutally Honest Admission On Aaron Rodgers

Aaron Rodgers and the Green Bay Packers bowed out of the playoffs over the weekend with a crushing, last-second loss at home to the San Francisco 49ers. The defeat brought a bizarre 2021 campaign to an end for a reigning MVP and reignited speculation about what his future will be.
NFL・8 HOURS AGO
Cassius

Antonio Brown Trolls Tampa Bay Buccaneers After Loss To Rams, Stephen A. Smith Suggests He Might Have CTE

Is Antonio Brown suffering from CTE? Stephen A. Smith believes it's a possibility.
NFL・5 HOURS AGO
crossingbroad.com

Where Does this Stephen A Smith Impression Rank All Time?

From a recent Saturday Night Live skit that actually did not make air:. I’m not a huge SNL guy. I feel like the writing and sketches have become watered down over the years. The jokes feel bland and writers are afraid to take risks as to not upset the suits upstairs and corporate interests, but this was pretty good. It’s not Jay Pharaoh’s Stephen A. Smith, which is the GOAT of SAS impressions. It’s not Frank Caliendo’s either, but I thought Keenan knocked his Michael Irvin impression out of the park.
ENTERTAINMENT・12 HOURS AGO
93.7 The Fan

Stephen A. Smith loses it reacting to Bills-Chiefs game in viral video

If Stephen A. Smith doesn’t have a voice on Monday’s episode of “First Take” on ESPN, here’s why. The host took to social media on Sunday night to react to the wild Bills-Chiefs game at the end of regulation. “I mean damn, I was ready...
NFL・14 HOURS AGO
93.7 The Fan

Butler confirms Tomlin called all the plays on defense

Talking to the Post-Gazette over the weekend, Butler confirmed what has been reported for a long time now, head coach Mike Tomlin called every defensive play since Butler took over in 2015.
NFL・11 HOURS AGO
The Spun

The Kansas City Chiefs beat the Buffalo Bills, 42-36, in overtime at Arrowhead Stadium on Sunday evening. The game was a wild one, with several lead changes in the game’s final two minutes. Ultimately, the Chiefs were able to force overtime, before scoring the game-winning touchdown on a pass from Patrick Mahomes to Travis Kelce.
NFL・1 DAY AGO

The Tampa Bay Buccaneers have cut a veteran running back to open up a roster spot ahead of Sunday’s Divisional Round game. The Bucs advanced to the Divisional Round this weekend by beating the Eagles last Sunday afternoon. Now, they have a date with the Los Angeles Rams, who may have had the most dominant playoff performance of the Wild Card round.
NFL・2 DAYS AGO
Sports Illustrated

Former Buccaneers wide receiver Antonio Brown just couldn’t help himself after his former team lost an absolute heartbreaker on Sunday. While Tampa Bay fans still were freshly mourning their season being over after a 30–27 loss to the Rams in the divisional round, Brown posted a meme on Twitter. And he reminded everyone of his own dramatic exit from the season.
NFL・1 DAY AGO
Audacy

Sean Payton has reportedly not yet committed to returning to the Saints next season while Troy Aikman could be leaving FOX for Amazon, leaving an opening that could put the Saints coach in the booth.
NFL・1 DAY AGO
Ok Magazine

All eyes have been on Aaron Rodgers after the Green Bay Packers lost their playoffs game 10-13 over the weekend. The team lost to the San Francisco 49ers on Saturday, January 22. The 38-year-old admitted after the game that he was feeling "numb," telling reporters: "I didn’t think it was gonna end like this," per Fox News.
NFL・17 HOURS AGO

Having Sunday Night Football in the early afternoon may feel unfamiliar to most NFL fans. But one familiar thing is Cris Collinsworth and his color commentary that they all seem to despise. Collinsworth and Al Michaels have the call for today’s big Rams-Bucs game in the Divisional Round. The winner...
NFL・1 DAY AGO
Yardbarker

With the 2021 NFL season coming to an end, Black Monday is on the rise. The Dallas Cowboys are headed to the postseason in Year 2 under Mike McCarthy, but other teams could be looking to head in a new direction. Who else is on the hot seat? Who will...
NFL・11 HOURS AGO
Fox News

The San Francisco 49ers pulled off an upset victory over the Green Bay Packers Saturday night to reach their second NFC championship game in three years. Niners kicker Robbie Gould capped off a nine-play, 44-yard drive with a game-winning 45-yard field. As Gould was celebrating on snowy Lambeau Field with teammates, he found quarterback Jimmy Garoppolo. Their embrace – and an expletive-laced message – was caught on camera.
NFL・1 DAY AGO
Larry Brown Sports

The Los Angeles Rams used a huge play late to stun the Tampa Bay Buccaneers on Sunday, and quarterback Matthew Stafford was well aware of how it happened. Stafford found wide receiver Cooper Kupp for a 44-yard gain that set the Rams up in field goal range just before time expired in the fourth quarter. The play came against what was supposed to be an all-out blitz, which left Kupp alone with safety Antoine Winfield Jr. In a one-on-one matchup, Kupp was always going to win. You can see the play in question here.
NFL・1 DAY AGO
The Spun

Despite quitting on his team in the middle of a game, if there’s one thing Antonio Brown has made clear,
NFL・2 DAYS AGO