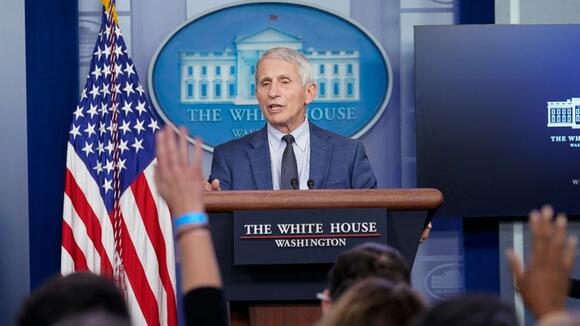 The U.S. has detected the nation's first case of the omicron variant of the coronavirus in California, the Centers for Disease Control and Prevention (CDC) said Wednesday.

The individual is a fully vaccinated San Francisco resident who returned from South Africa on November 22, the CDC said. The person had mild symptoms, which are improving, and is self-quarantining.

All close contacts have also tested negative, the CDC added.

During a press briefing shortly after the case was disclosed, chief White House medical adviser Anthony Fauci urged Americans to get vaccinated against COVID-19 and said that those who are eligible should get their booster shots, describing the vaccines as the best protection against the virus and the omicron variant.

“We know what we need to do to protect people,” Fauci told reporters while encouraging Americans to wear masks in congregate settings to prevent the spread of the virus.

"[T]he fact is that people should wind up getting vaccinated and boosted if they’re eligible for a boost. I keep coming back to that because that’s really the solution to this problem," Fauci said.

He said the infected individual had not received a booster.

White House press secretary Jen Psaki also told reporters that President Biden has been briefed on the omicron variant, noting that he meets with his medical team on a daily basis. Biden is slated on Thursday to outline plans to combat the coronavirus, and particularly the omicron and delta variants, during the winter months.

The person entered the U.S. four days before South Africa announced the discovery of the variant, and tested positive on Nov. 29, the same day the Biden administration's ban on travelers from eight African countries took effect.

The ban has come under fire from prominent health experts and former administration officials who say it is ineffective and punitive against African countries, especially as Western countries have failed to deliver needed vaccine supplies and logistics to the continent.

Fauci, however, defended the policy as necessary to buy time to better understand the new variant but said it was only temporary.

"We did struggle with that," Fauci said on Wednesday in response to a question from a reporter for Today News Africa. "We wanted to see if we could buy time, temporarily, so I do hope that this gets sorted out and lifted before it has any significant impact on your country."

Fauci also said he doesn't think Americans should be doing anything differently with their lives, and emphasized the importance of the mitigation strategies that are known to be effective — getting vaccinated, masking in crowded public spaces and physical distancing.

In a joint statement, California and San Francisco public health officials said the case was identified "thanks to California's large-scale testing and early detection systems."

The agencies said they are increasing testing at airports for arrivals from several countries identified by the CDC.

"We must remain vigilant against this variant, but it is not a cause for panic," the agencies said.

It was widely expected that the variant would be detected in the U.S. It has already been identified in other countries, including the U.K. and Canada, even after many nations moved to restrict travel from southern African countries, where the first known case was discovered at the end of last week.

“As the President said last Friday, it was only a matter of time before the first case of Omicron was detected in the U.S. We are prepared to meet this challenge with science and speed,” White House COVID-19 response coordinator Jeff Zients said in a statement.

“The President’s medical team continues to believe that existing vaccines will provide some level of protection against severe illness from Omicron, and individuals who have gotten boosters have even stronger protection. As such, we urge all adults to get their booster shots and to get themselves and their kids vaccinated, if they haven’t already,” Zients continued.

Officials say it will take at least two weeks to have a better understanding of the transmissibility and severity of omicron and the degree to which vaccines protect against it.

In the meantime, the Biden administration is working with the three vaccine manufacturers to prepare for the possibility that vaccines will need to be adjusted in order to provide protection against the new variant, but any changes will take time.

The WHO says the next COVID variant will be more infectious than Omicron, and it might be more deadly

Never miss a story: Follow your favorite topics and authors to get a personalized email with the journalism that matters most to you. In the short time since it was first detected in South Africa last November, Omicron has quickly usurped Delta as the world’s dominant variant of COVID-19. Omicron’s rapid spread has sparked record waves of infection in the U.S., Europe, and Asia. Yet despite its high transmissibility, Omicron has appeared less deadly than its predecessor, with hospitalization rates among vaccinated people remaining relatively low.
PUBLIC HEALTH・2 DAYS AGO
WebMD

Deaths Due to Omicron Higher Than From Delta

Accounting for 99.9% of all COVID-19 cases in the United States, it’s proving even deadlier than the Delta variant. This week the nation recorded a seven-day average of 2,200 daily coronavirus-related deaths, higher than the daily death count recorded two months ago during the Delta variant surge, The Wall Street Journal reported.
PUBLIC HEALTH・1 DAY AGO
WCNC

Here's what's known about BA.2, the omicron subvariant detected in the US

CHARLOTTE, N.C. — Just as it seems the nation could be hitting its peak in the current omicron surge, another version of the virus is coming on the radar. Washington state health officials recently reported two cases of an omicron subvariant, called BA.2. While many of BA.2's properties are...
PUBLIC HEALTH・1 DAY AGO
Newsweek

A full year into President Joe Biden's term, Americans have watched the China-originated COVID-19 virus work its way through half of the Greek alphabet.
PUBLIC HEALTH・2 DAYS AGO

There are 11 confirmed cases in California with two in Santa Clara County, where officials there say little is known about the new variant.
SANTA CLARA COUNTY, CA・3 DAYS AGO
TIME

Omicron is less virulent and more infectious than previous COVID-19 variants, giving experts hope it could be the pandemic's last stand
SCIENCE・2 DAYS AGO
Florida Phoenix

Fauci declines to predict COVID vaccine timetable for kids under 5

Quality Journalism for Critical Times WASHINGTON — Parents hoping to vaccinate their young children against COVID-19 will need to be patient, Dr. Anthony Fauci cautioned Wednesday. The director of the National Institute of Allergy and Infectious Diseases said while he expects the vaccine regimen for children under 5 will be three doses, he couldn’t provide a timeline on when the […] The post Fauci declines to predict COVID vaccine timetable for kids under 5 appeared first on Florida Phoenix.
KIDS・2 DAYS AGO
nwmissourinews.com

After multiple record-setting Mondays, Nodaway County has experienced a slight dip in daily positive COVID-19 cases. The Nodaway County Health Department announced 60 new cases of the virus for Jan. 26, the lowest amount of new cases on a Monday since Jan. 3. “It does feel better this week,” said...
MARYVILLE, MO・2 DAYS AGO

DALLAS — UT Southwestern confirmed two cases of BA.2 in North Texas Thursday, a new mutation of the omicron variant of the coronavirus. Researchers identified these BA.2 cases through genomic sequencing. Medical experts have to analyze the genetic traits of BA.2 closely in order to diagnose it, which is why some refer to this new mutation as “stealth omicron.”
DALLAS, TX・1 DAY AGO
whbl.com

KATHMANDU (Reuters) – Bhutan has reported its first 14 cases of Omicron coronavirus variant, a health official said on Friday, amid a surge of the pandemic in the Himalayan kingdom that has so far been relatively successful at keeping the disease at bay. Sonam Wangchuk, chief of the Royal...
PUBLIC HEALTH・14 DAYS AGO
NBC News

Reparations are for descendants of Black slaves, says California official

California’s secretary of state said Thursday that reparations for Black Americans should be limited to people whose forbears were kidnapped from their homeland, stripped of their ancestry and left with nothing after generations of forced labor. Shirley Weber, the daughter and granddaughter of sharecroppers who authored legislation creating the...
CALIFORNIA STATE・9 HOURS AGO
suncoastnews.com

LARGO — Dr. Ulyee Choe, director of the Florida Department of Health in Pinellas, told county commissioners Jan. 11 that there had been a recent spike in COVID-19 cases caused mostly by the omicron variant. He said omicron was more contagious than other variants but appears to cause less...
PINELLAS COUNTY, FL・12 DAYS AGO

Omicron sub-variant BA.2 ‘under investigation,’ detected in US

LONDON - Scientists believe they have detected a sub-variant of the omicron variant, which has already been blamed for the latest wave of COVID-19 cases across the globe. The UK Health Security Agency announced Friday that it was investigating an omicron sub-lineage known as BA.2. "There is still uncertainty around...
SCIENCE・4 DAYS AGO
WJW FOX 8 News Cleveland

COVID-19 vaccine booster drive stalls in the US

The COVID-19 booster drive in the U.S. is losing steam, worrying health experts who have pleaded with Americans to get an extra shot to shore up their protection against the highly contagious omicron variant.
U.S. POLITICS・2 DAYS AGO
POLITICO

The agency will also allow some immunocompromised children as young as age 5 to get an additional dose.
CHICAGO, IL・2 DAYS AGO
Newsweek

The Annenberg Public Policy Center survey found mixed messages about COVID caused a drop in faith in the Centers for Disease Control and Prevention.
PUBLIC HEALTH・9 HOURS AGO

The sub-variant, which gets its name “stealth” because particular genetic traits make it somewhat harder to detect, appears to spread more easily than the original version of omicron, according to preliminary findings in South Africa and Europe.
CONNECTICUT STATE・1 DAY AGO
Newsweek

The Question of Legal Culpability for COVID Deaths | Opinion

If Republicans succeed in preventing President Joe Biden from containing the pandemic, they are more likely to win elections. But more Americans are dying as a result. That raises a legal question.
CONGRESS & COURTS・2 DAYS AGO
AFP

The city of San Jose voted Tuesday to pass a law that will compel gun owners to take out insurance to cover any damage caused by their weapon, a move its mayor said was the first of its kind in the United States. The plan, voted on by the city council, will also require weapons owners in the Californian city to pay an annual fee that will fund a non-profit group to help victims of gun violence. "Tonight San Jose became the first city in the United States to enact an ordinance to require gun owners to purchase liability insurance, and to invest funds generated from fees paid by gun owners into evidence-based initiative to reduce gun violence and gun harm," Mayor Sam Liccardo said in a statement on Twitter. The proposed ordinance, which must pass a second reading on February 8 before it becomes law in August, is also intended to cut down the costs to taxpayers.
SAN JOSE, CA・2 DAYS AGO
Complex

Health Experts Monitoring Omicron Subvariant Detected in the US

As the United States continues to grapple with COVID-19, health officials around the world are keeping their eyes on BA. 2—an omicron subvariant that has been found in several countries across the world. The World Health Organization announced this week that it continues to investigate the mutations of BA....
PUBLIC HEALTH・1 DAY AGO