Russia to expel some US Embassy staff 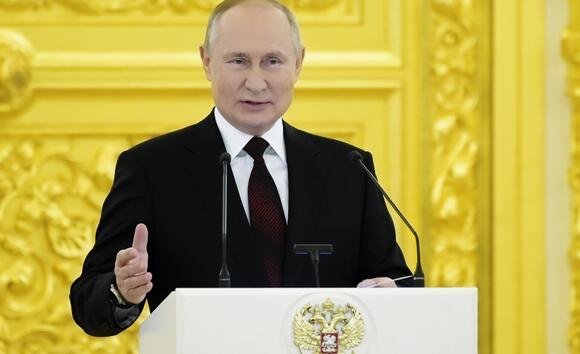 R ussia is ordering U.S. Embassy staff members who have been in Russia for over three years to leave by Jan. 31, 2022.

Russian Foreign Ministry spokeswoman Maria Zakharova said Wednesday that the move is a response to a similar U.S. policy toward the Russian Embassy in the United States in which 24 staff members were ordered out in August.

"We regard this requirement as expulsion & intend to respond accordingly," Zakharova said in a statement. "This doesn't fit in any way diplomatic norms — restricting the term of diplomats' stay in the host country is an overt encroachment by the United States on the sovereign right of the states that have dispatched them."

Tensions between the U.S. and Russia have escalated drastically in recent weeks.

Russia has reportedly amassed a large troop presence on its border with Ukraine. Ukrainian officials also claimed to have discovered a plot from Russia to orchestrate a coup within Ukraine. Putin said that if NATO helped Ukraine boost its military technology, it would be crossing a "red line" for Russia.

Secretary of State Antony Blinken has threatened Russia with "serious consequences," such as economic sanctions, if it continues its aggression toward Ukraine.

Ukraine and Russia have been engaged in a confrontation that dates back to at least 2014 when Russia annexed Crimea . The two sides have exchanged blows many times since, and Ukraine also limited the water supply to Crimea, escalating tensions.

The U.S. has supported Ukraine during this conflict by sanctioning Russia and supplying Ukraine with military supplies .

The Washington Examiner reached out to the U.S. Embassy in Russia for comment but did not receive a response.

President Joe Biden is reviewing plans to deploy thousands of troops and military equipment to fellow NATO nations ahead of a potential Russian invasion of Ukraine.
MILITARY・16 HOURS AGO
WashingtonExaminer

NATO announced on Monday that it was reinforcing Eastern Europe with additional ships and fighters.
MILITARY・22 HOURS AGO
WashingtonExaminer

8,500 US troops put on 'heightened alert' amid Ukraine tensions

Defense Secretary Lloyd Austin put roughly 8,500 troops on "heightened alert" for a potentially quick deployment to Eastern Europe as the region prepares for the possibility of a Russian invasion of Ukraine.
MILITARY・14 HOURS AGO
MarketWatch

In the ongoing conflict between Russia and Ukraine, Russian President Vladimir Putin’s eyes are on a bigger prize, a top expert on Putin and his country says. “This time,” writes former intelligence officer Fiona Hill in a New York Times op-ed, “Mr. Putin’s aim is bigger than closing NATO’s ‘open door’ to Ukraine and taking more territory — he wants to evict the United States from Europe. As he might put it: ‘Goodbye America. Don’t let the door hit you on the way out.’ ”
POLITICS・17 HOURS AGO

The exercise is the first time NATO has commanded a full US carrier strike group since the Cold War, the alliance said.
MILITARY・16 HOURS AGO
Newsweek

The Ukrainian government says Russia has spread "a large amount of misinformation, manipulation and fakes" to sow panic among Ukrainians and foreigners.
POLITICS・12 HOURS AGO
The Guardian

Analysis: Putin can still turn back but it looks less likely as economic and political consequences mount
POLITICS・17 HOURS AGO
The Independent

The first shipment of the United States’ $200 million security support package for Ukraine has arrived in Kiev as tensions grow over the prospect of Moscow invading its neighbour with tens of thousands of Russian troops gathered at the border. High-level talks took place beteen US and Russian ministers last week while President Joe Biden ramped up his rhetoric to urge Russia’s Vladimir Putin not to attack Ukraine.Mr Biden initially said last week: “It’s one thing if it’s a minor incursion and we end up having to fight about what to do and what to not do, etcetera,” before...
FOREIGN POLICY・1 DAY AGO

The U.S. Embassy in Kiev has already ordered diplomats' family members out of the country.
FOREIGN POLICY・16 HOURS AGO

Psaki says US is ‘refining plans for all scenarios’ in Ukraine

White House Press Secretary Jen Psaki said that the United States is refining any potential plans as tensions heighten between Russia and Ukraine. “We have been consulting with allies and deployments and refining plans for all scenarios,” she said. “We have always said we would reinforce our allies on the eastern flank and those conversations and discussions have certainly been a part of what our national security officials have been discussing with their counterparts now for several weeks.”The European Union’s top diplomat said that the union would keep its diplomats in Ukraine for the time being, saying there was no...
FOREIGN POLICY・16 HOURS AGO
WGN Radio

The State Department on Sunday ordered the families of all American personnel at the U.S. Embassy in Ukraine to leave the country amid heightened fears of a Russian invasion.
U.S. POLITICS・1 DAY AGO
ABC11 Eyewitness News

The Defense Department placed 8,500 U.S.-based troops on heightened alert for deployment to Europe in response to the escalating crisis with Russia over Ukraine.
MILITARY・1 HOUR AGO
WGN News

Britain has sent anti-tank weapons to Ukraine as part of efforts to bolster the country’s defenses against a potential Russian attack.
POLITICS・1 DAY AGO
WashingtonExaminer

Secretary of State Antony Blinken’s decision to withdraw some Americans from the U.S. Embassy in Kyiv was “premature” and plays into Russia’s hands, according to a prominent Ukrainian diplomat.
FOREIGN POLICY・14 HOURS AGO
insideedition.com

Tensions are rising as tens of thousands of Russian soldiers amass at the Ukraine border. Ukraine also has military members in the area. The U.S. has ordered family members of the staff at their embassy in Ukraine to evacuate due to the threat of danger from the Russian military. The...
FOREIGN POLICY・13 HOURS AGO
WGN News

US draws down Ukraine embassy presence as war fears mount

Britain has sent anti-tank weapons to Ukraine as part of efforts to bolster the country’s defenses against a potential Russian attack.
MILITARY・1 DAY AGO
WashingtonExaminer

Chinese General Secretary Xi Jinping has not discouraged Russian President Vladimir Putin from launching a major attack on Ukraine, according to Chinese and Russian officials.
POLITICS・12 HOURS AGO