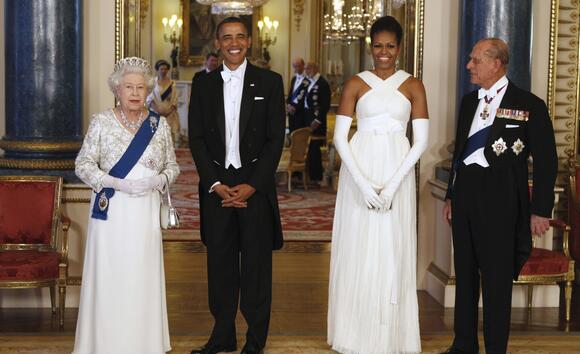 George Osborne, a former chancellor of the Exchequer, said Tuesday that the queen asked him during a state banquet in 2011 to tell Obama to leave because she wanted to go to sleep.

"The queen came up to me and said, 'Will you tell the president it's late and I want to go to bed?' ... Obama was having a great time, kind of knocking back vodka martinis with his mates, and I was like, 'Oh my God, I'm going to be the person that has to go and tell him to go home,'" Osborne said during an event hosted by the Old Pauline Club, an alumni association at St. Paul's School in England, according to Business Insider .

Obama and former first lady Michelle Obama attended a state banquet as guests of honor at Buckingham Palace in 2011. The night also saw a blunder from the former president when he began his toast with "To Her Majesty, the queen," which signaled the band to begin playing the national anthem, "God Save the Queen." He gave the rest of his speech drowned out by the band.

The 95-year-old monarch has seen multiple health scares recently, including an overnight hospitalization for "preliminary investigations" in October. She has since canceled multiple trips and appearances under the recommendations of her doctor and was placed on a two-week break from royal duties. She most recently canceled her appearance at a Remembrance Sunday event due to a back sprain.

Osborne, a member of the Conservative Party, was the chancellor of the Exchequer from 2010 to 2016. He also served as the first secretary of state from 2015 to 2016.

President Barack Obama gifted the Queen all of his speeches on 💿...Obama also removed the bust of Winston Churchill from the White House. It was reported Queen Elizabeth believed Obama is a narcissistic bore. Who can blame her?

She was not amused by Barack. Can’t call her a racist. She got rather cozy with Mandela. Let’s say she learned to recognize real and fake gems

Pence says he hasn't spoken to Trump since last summer

Former Vice President Mike Pence says that he has not talked to former President Donald Trump since last summer.
POTUS・23 HOURS AGO
WashingtonExaminer

The cat is out of the bag.
PETS・23 HOURS AGO
wibqam.com

LONDON (Reuters) – Army veteran Tony Judge was just four years old when a young Queen Elizabeth ascended the British throne 70 years ago, though he remembers the day vividly as excited households huddled around television sets to watch the historic moment. “A number of families went to a...
POLITICS・2 DAYS AGO

Queen Elizabeth II has been living at her Windsor Castle residence since the start of the coronavirus (COVID-19) pandemic but she recently traveled more than 100 miles to another royal residence to mark a grim anniversary alone. And while there, the monarch will not be spending time inside the main house.
WORLD・1 DAY AGO
Business Times

Queen Elizabeth II is, reportedly, helping Prince Andrew in financial matters. With all controversies surrounding him these days, the royal-born Prince is said to be in "dire straits financially."
CELEBRITIES・5 DAYS AGO
Business Times

Queen Elizabeth II has yet to see or hold her great-granddaughter from Prince Harry and Meghan Markle. This is why she is, reportedly, "begging" for her grandson to compromise.
U.K.・5 DAYS AGO
epicstream.com

Prince Harry couldn't allegedly get Queen Elizabeth to help him with his security problem. Prince Harry recently shocked the royal family and his critics when he launched an investigation against the Home Office for allegedly refusing to give him security in the United Kingdom. The Duke of Sussex also revealed via his legal team that he and Meghan Markle won’t set foot in the United Kingdom until they are given the protection and security that they deserve.
CELEBRITIES・6 DAYS AGO

Prince Andrew only has nine months to prepare his defense arguments in the continuation of his legal battle against the sexual assault case filed by his alleged victim Virginia Giuffre. Sadly, a royal commentator believes the Duke of York's civil trial will overshadow Queen Elizabeth II's Platinum Jubilee celebrations.
CELEBRITIES・3 DAYS AGO
Newsweek

Queen Elizabeth II has arrived at the royal estate where her father died ahead of the start of her Platinum Jubilee, when she celebrates 70 years on the throne.
U.K.・5 DAYS AGO
epicstream.com

Prince Andrew still has security because he's a much bigger threat compared to Prince Harry. Prince Andrew and Prince Harry have both been stripped of their HRH titles and are now considered private citizens. The reason behind Queen Elizabeth’s decision to strip them of their military affiliations and HRH titles differ.
CELEBRITIES・7 DAYS AGO
AOL Corp

Trying to stay out of it. Queen Elizabeth II is in a tricky spot amid Prince Harry’s plea for added security protection during his U.K. visits. “[It’s] hard for her, as a grandmother, to not really be able to intervene,” royal expert Kristin Contino exclusively told Us Weekly on Tuesday, January 18. “She’s [not] going to go up against the government and say, ‘Well, you know, you need to give him security.’ Because right now, the metropolitan police [are] saying they’ve conducted a review and [concluded that] the threat is considered low to him.”
CELEBRITIES・9 DAYS AGO

Applicants to the vacancy of part-time Housekeeping Assistant at Holyroodhouse will be offered 33 days holiday and a 15% pension contribution.
CELEBRITIES・9 DAYS AGO
OK! Magazine

A royal expert has weighed in after it was reported that Prince Harry is seeking an appeal following the British government's refusal to allow him to pay for police protection. According to a statement released by the Duke of Sussex, he and wife Meghan Markle personally fund their own security,...
U.K.・11 DAYS AGO
newstalkflorida.com

The office of U.K. Prime Minister Boris Johnson issued an apology to Queen Elizabeth II on Friday for a party at the prime minister’s residence on the eve of Prince Philip’s funeral, Reuters reported. “It is deeply regrettable this took place at a time of national mourning and...
U.K.・12 DAYS AGO
Chamberlain-Oacoma Sun

Boris Johnson apologizes to Queen Elizabeth for the crown feast

Downing Street apologized to Buckingham Palace for the two parties, which took place at the Prime Minister’s residence before Prince Philip’s funeral. The rallies took place on April 16, 2021, and continued until the early hours of the morning, according to the Daily Mail, which put Boris Johnson in a difficult position. According to the BBC, a spokesman for the British Prime Minister said: “It is sad that this happened at a time of national mourning. The day before Prince Philip’s funeral, the Johnson administration was forced to apologize to Queen Elizabeth following two simultaneous dinners in different parts of the Prime Minister’s residence.
CORONAVIRUS・14 DAYS AGO
Deadline

EXCLUSIVE: Roger Michell’s last movie, the documentary Elizabeth about the life of Queen Elizabeth II, has been picked up by Signature Entertainment and set for a Friday, June 3 theatrical release to coincide with the monarch’s Platinum Jubilee. The late British filmmaker, known for movies including Notting Hill, The Duke, Hyde Park On Hudson and My Cousin Rachel, completed Elizabeth just days before he passed away last September. The film is described to us as a “nostalgic, uplifting and fresh modern chronicle of the extraordinary 70-year reign of Her Majesty the Queen, the longest-lived, longest-reigning British monarch and longest-serving female head of...
MOVIES・9 DAYS AGO
epicstream.com

Meghan Markle is expected to get criticisms from online trolls. Meghan Markle appears to be having the time of her life in the U.S. together with Prince Harry, Archie, and Lilibet. The Duchess of Sussex previously revealed that the “racism” behind closed palace doors and the continuous condemnations of the British media are among the primary reasons why she and her husband was forced to step back from their roles as senior working royals and ditch the royal life for good.
CELEBRITIES・1 DAY AGO
The Guardian

Prince Andrew: which other royal figures have faced legal action?

In 2022, Queen Elizabeth II will become the first British monarch to celebrate a platinum jubilee, marking 70 years since her ascension to the throne. To honor her longevity, the high-end department store Fortnum & Mason has launched the Platinum Pudding Competition—a contest to create a new sweet that will be served to the Queen and at parties around the country this summer. The winner will not only receive a trophy and a raft of tasty goodies, but their recipe will become part of royal history.
FOOD & DRINKS・1 DAY AGO