2 EV Stocks I Would Buy Before Rivian

Going by traditional metrics, the valuations of electric vehicle (EV) stocks don't make sense right now. The latest example of this trend is Rivian (NASDAQ: RIVN) , whose mega IPO has garnered lots of attention from investors. But with a market capitalization of more than $100 billion, the stock is already priced for perfection. 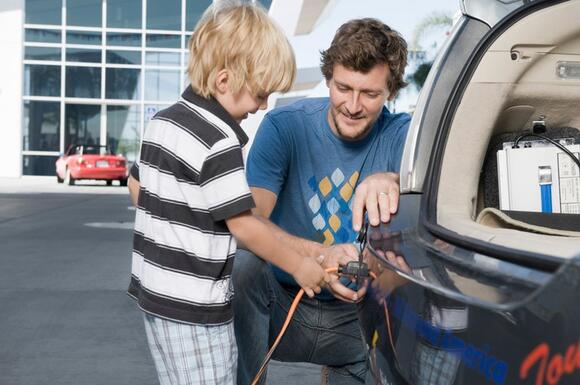 Two top reasons to like Lucid Group (NASDAQ: LCID) from a product standpoint are the industry-leading range its vehicles can reach on a single charge and the attractive designs of its vehicles. The Lucid Air Dream Edition offers a range of more than 500 miles -- 100 miles more than Tesla 's Model S, which was until now the longest-range EV model available on the market. Though Rivian is the first company to fully launch an electric pickup truck, it isn't clear if its vehicle offers any significant advantages over the upcoming electric pickup trucks from General Motors , Ford , Tesla, or Lordstown Motors .

Lucid's superior technology and sleek designs have attracted potential vehicle buyers, and it now has cancellable reservations for 17,000 vehicles. Lucid plans to deliver 20,000 vehicles in 2022, generating $2.2 billion in revenue.

By comparison, Rivian expects to fulfill its preorder backlog of around 55,400 vehicles by the end of 2023. Even if we assume that it delivers half of this in 2022, and assuming an equal split between the R1T model (starting at $67,500) and the R1S model (starting at $70,000), Rivian may generate around $1.9 billion in revenue. Despite lower expected sales in 2022 than Lucid, Rivian stock's market capitalization of around $105 billion as of this writing is higher than Lucid's market cap of around $90 billion. Notably, both companies face significant risks and may not deliver vehicles according to their plans.

Lucid plans to launch newer versions and models systematically in the coming years, with three new versions of the Lucid Air -- Grand Touring, Touring, and Pure -- in 2022. In 2023, it plans to launch a luxury SUV called Gravity. Overall, Lucid looks like a better bet based on the industry-leading range of its vehicles as well as its slightly better valuation compared to Rivian.

Chinese EV maker Nio (NYSE: NIO) sold 66,395 vehicles in the first nine months of 2021. In terms of sales, the company is more established than both Lucid and Rivian. Yet Nio stock has a much lower market capitalization compared to Lucid or Rivian. 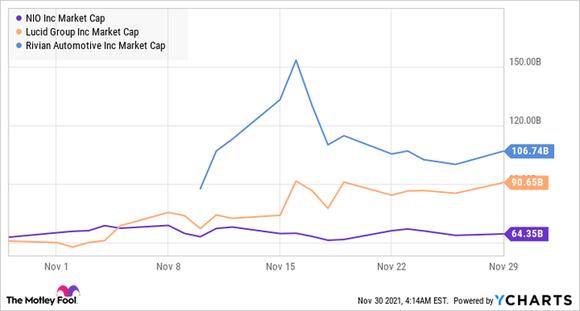 Nio operates in a fast-growing market for electric vehicles. In the first half of 2021, China accounted for 42% of all EV sales globally. Nearly 1.1 million EVs were sold in China in the first half of this year -- roughly equal to the EVs sold in the country in all of 2020.

In the third quarter, Nio's revenue grew 117% year over year and 16% sequentially. The company's October deliveries fell due to some planned downtime as it prepares for the production of its new models.

Nio is on course to start deliveries of its new luxury sedan, the ET7, early next year. Beyond the domestic market, Nio is planning to target the European market as well. The company has started deliveries in Norway, a leading market for EVs, and it plans to start selling in Germany by the end of next year. Moreover, Nio plans to launch lower-priced models in the future to cater to the mass markets. Overall, Nio investors can look forward to continued growth in the years to come.

In short, Nio looks like a better bet than Rivian right now.

They just revealed what they believe are the ten best stocks for investors to buy right now… and Rivian Automotive, Inc. wasn't one of them! That's right -- they think these 10 stocks are even better buys.

It's the Fed, but it's not just the Fed.
ECONOMY・23 HOURS AGO
The Motley Fool

Green energy stocks dodged a bullet on Monday -- but it's coming back for them again today.
STOCKS・21 HOURS AGO
The Motley Fool

Tesla reports earnings after the bell tomorrow -- here's what to expect.
STOCKS・23 HOURS AGO

Let's look beyond these companies' recent struggles.
STOCKS・23 HOURS AGO
The Motley Fool

Tandem Diabetes Care is tapping into a vast and expanding worldwide market. Fiverr International will continue to perform thanks to the growth of the gig economy. Concerns surrounding interest rate hikes and frothy valuations have turned the market against growth stocks, and many of these companies are suffering as a result. But amid these headwinds, it's more important than ever for investors to keep a long-term mindset.
STOCKS・23 HOURS AGO
Motley Fool

The more experience you gain as an investor, the more excited you get when stocks crash. Costco, Netflix, and Berkshire Hathaway are three excellent businesses at the top of my wish list. Bear markets feel very unnerving to live through, but fortunately, the bear doesn't stick around long. Stocks crash...
STOCKS・2 HOURS AGO

Let's look at the investment merits, if any, of this popular meme token.
STOCKS・4 HOURS AGO
The Motley Fool

Valuation is important, but it isn't everything.
STOCKS・3 HOURS AGO
The Motley Fool

These 3 Stocks Are Timely Buys Amid the Market Sell-Off

A market correction is a great time to buy shares of solid companies with long-term track records at better valuations.
STOCKS・3 HOURS AGO
The Motley Fool

Bloomberg warns that the semiconductor giant's Arm buyout could be doomed.
STOCKS・22 HOURS AGO
The Motley Fool

These two clinical-stage biotechs have major upcoming catalysts that could catapult their shares higher.
STOCKS・28 MINUTES AGO
The Motley Fool

Should Investors Be Worried About Another Bear Market?

The signs that another market storm could be ahead are worrying some investors.
ALEXANDRIA, VA・3 HOURS AGO
The Motley Fool

Sea Limited's stock has great prospects, but investors should not neglect the potential downsides.
STOCKS・3 HOURS AGO
The Motley Fool

As a long-term investor, what should you do if the stock market is crashing?
STOCKS・2 HOURS AGO
The Motley Fool

GE delivered an earnings beat -- of a sort -- but investors are focusing on its revenue miss and GAAP losses instead.
STOCKS・21 HOURS AGO
The Motley Fool

Why Shopify Stock Is Down Sharply on Tuesday

Should You Buy Real Estate Now That Stocks Are Crashing?

It's been a rough go for stocks. Should you seek to branch out?
MARKETS・2 HOURS AGO