Is Target a Better Growth Stock Than Amazon?

Don't look now, but Target (NYSE: TGT) is taking market share from Amazon (NASDAQ: AMZN) in the U.S. retail business. After more than two decades of fighting against Amazon's e-commerce model , the brick-and-mortar giant seems to be on solid footing once again.

What's new in the battle between these two is that Target is actually growing faster than Amazon in the retail space. Both companies grew rapidly during the pandemic, but Target has found a way to leverage its brick-and-mortar presence to take market share from Amazon as the pandemic's impact has slowed. 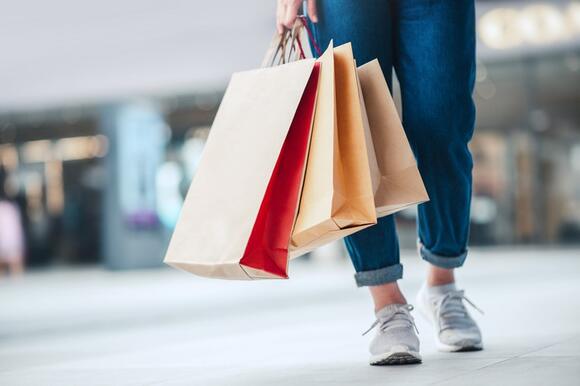 Below is a table of overall growth at Target compared to U.S. retail growth at Amazon. You can see that during the pandemic Amazon was a favorite for consumers, nearly doubling Target's growth, but today Target is growing more quickly .

What these numbers don't show is just how quickly Target's digital services are growing. In its recently reported fiscal third quarter, Target's same-day services -- which include Pickup, Drive Up, and Shipt -- grew nearly 60% on top of 200% a year ago. In each instance, the brick-and-mortar stores have been a point of strength, not a weakness. That's the core change for Target over the past few years.

I will note that we may be seeing Amazon's growth slow because it pulled more sales forward during the pandemic than Target did. But time will tell if slower growth is a trend for Amazon.

Another issue Amazon is facing is that e-commerce competitors are better than ever. Shopify (NASDAQ: SHOP) has made it so much easier to build a long-tail retail brand and reach customers around the world. Companies don't have to sell through Amazon's ecosystem; they can build brands on their own and reach customers directly.

Shopping has gotten easier too. Features like Apple Pay and PayPal Pay have taken the ease of checking out on Amazon and translated it across the internet.

Competition is much stronger than at any time in Amazon's history. The company has scale and a logistics infrastructure that's hard to match, but if growth continues to slow, it could create cracks in Amazon's armor.

The future of retail

Target and other retailers are leaning into their retail presences. Instead of being a weakness, these physical locations have become a strength, because goods can be ready in minutes or hours. I drive by a Target on a nearly daily basis, so swinging into the parking lot to pick up a few items without going into the store is a great way to shop.

Another strength Target offers is its incredible breadth of selection. The company has electronics and clothing, but also has everyday items like toiletries and groceries that are often needed both quickly and on a regular basis. By offering more of these products for delivery or Drive Up, Target can attract more customers.

I think we're just starting to see this shift to more localized e-commerce shopping, and Target is a leader. It has spent decades building out convenient locations and understanding what people want. Now as it digitizes the purchasing process and reconfigures stores to make picking up products even easier, I think it will continue to grow into a stronger and stronger competitor.

10 stocks we like better than Target
When our award-winning analyst team has a stock tip, it can pay to listen. After all, the newsletter they have run for over a decade, Motley Fool Stock Advisor , has tripled the market.*

They just revealed what they believe are the ten best stocks for investors to buy right now... and Target wasn't one of them! That's right -- they think these 10 stocks are even better buys.

2022 could bring out ample opportunities for growth for this small-cap stock.
STOCKS・16 HOURS AGO
The Motley Fool

These stocks are perfect for value investors looking to buy and hold for the long term.
STOCKS・16 HOURS AGO
The Motley Fool

Further Evidence That Amazon Could Raise the Price of Prime

Conditions are ripe for the e-commerce giant to boost the annual fee for its popular loyalty program.
BUSINESS・13 HOURS AGO
The Motley Fool

Procter & Gamble and Zoom could both be strong additions to a balanced portfolio.
STOCKS・15 HOURS AGO
The Motley Fool

A little money can go a long way after stocks and crypto have corrected sharply in recent days.
STOCKS・13 HOURS AGO
Business Insider

Former drone engineer Patrick McGah told a manager he was struggling with balancing his workload with parenting, McGah told Insider.
BUSINESS・18 HOURS AGO

Its shares have skyrocketed in the past few years, so it's not completely out of the realm of possibility.
STOCKS・13 HOURS AGO
The Motley Fool

Here Are the 5 Best Dividend Stocks to Buy for 2022

These outstanding businesses can help you protect and grow your wealth.
STOCKS・16 HOURS AGO
The Motley Fool

A market crash may bring the prices of these stocks down to more attractive levels.
STOCKS・16 HOURS AGO
The Motley Fool

These 4 Dow Stocks Are Screaming Buys in 2022

The 125-year-old Dow Jones Industrial Average is home to these four exceptional growth and value stocks.
STOCKS・19 HOURS AGO
The Motley Fool

The e-commerce market darling's stock is now down about 47% from its highs set in November.
STOCKS・15 HOURS AGO
The Motley Fool

Winners keep on winning.
STOCKS・16 HOURS AGO
The Motley Fool

After a 470% price rally, the recent dip might be a chance to buy Axcelis Technologies.
STOCKS・13 HOURS AGO
The Motley Fool

The company missed on both earnings and revenue estimates to end 2021.
STOCKS・12 HOURS AGO
The Motley Fool

All three are innovators in their respective markets.
STOCKS・2 DAYS AGO
The Motley Fool

Riding the Oracle of Omaha's coattails has long been a moneymaking strategy.
STOCKS・1 DAY AGO
The Motley Fool

Why Shares of Block, Mastercard, and StoneCo Are All Falling Today

Let's look beyond these companies' recent struggles.
STOCKS・13 HOURS AGO