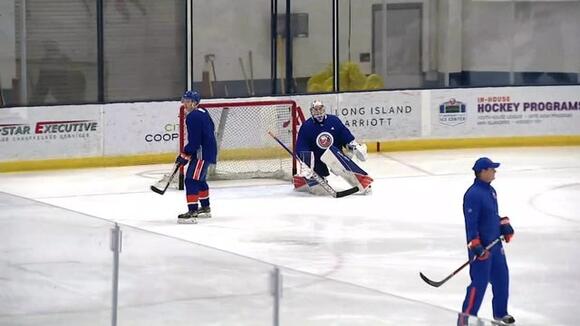 The Islanders are back on the ice and were cleared to resume playing by the NHL following a brief pause due to COVID-19.

The Islanders had to postpone two games because of a COVID-19 outbreak, which included eight players.

The team will play San Jose on Thursday.

Police: 7-year-old girl in critical condition after being found unresponsive in Melville pool

A student of Lehman College has been identified as one of the victims of the tragic fire in Fordham Heights that killed 17 people on Sunday. Sera Janneh, 27, was a sophomore at the school majoring in psychology, Lehman College announced Wednesday. "Our deepest condolences to the Janneh family and...
BRONX, NY・4 DAYS AGO
News 12

Rescuers in Cutchogue free raccoon with head stuck in jar

A raccoon caught on camera with its head stuck in a jar is free thanks to Strong Island Animal Rescue League. The homeowner tried calling other places and had no luck before the league swept in. Frankie from the rescue drove to Cutchogue to rescue the raccoon.
CUTCHOGUE, NY・4 DAYS AGO
Sportsnaut

The good mojo Bruce Boudreau brought with him to the Vancouver Canucks seems to have run out. The Canucks suffered
NHL・23 HOURS AGO

An 11-alarm fire destroyed a chemical plant in the city of Passaic on Friday night. The first started inside of Qualco Inc. on Canal Street around 9 p.m. The company makes chemicals used to treat pools and spas, according to its website. Bright orange flames and thick black smoke could be seen pouring out of the building.
PASSAIC, NJ・1 DAY AGO
News 12

NYPD: 35-year-old found shot and killed in the Bronx

Police say a man is dead after a shooting incident Sunday night in the Bronx. Police say at 10:50 p.m., officers responded to a shooting call in front of 1005 Walton Ave. According to police, officials found a 35-year-old man sitting in the driver's seat of a Honda Accord, unconscious and unresponsive, with a gunshot wound to the chest.
BRONX, NY・6 DAYS AGO
News 12

This week, thousands of inmates who have completed sentence-reduction programs are expected to be released from federal prison programs. The “first step act” was created in 2018 and it promised a path to an early return for mostly nonviolent offenders who complete programs that reduce the chance of committing the same crime.
POLITICS・2 DAYS AGO
News 12

WARNING: The video posted above may be too disturbing for some viewers. The New Jersey Office of the Attorney General has released new video from a deadly shooting in Cumberland County involving police officers. The shooting happened last month on West Park Drive in Vineland. It started with a 911...
VINELAND, NJ・3 DAYS AGO
News 12

Family and City Council members are seeking answers from police and other Bridgeport officials a month after the death of a 23-year-old Bridgeport woman. Lauren Smith-Fields was found dead inside her Plymouth Street home on the Upper East Side of Bridgeport after meeting a man on the dating app Bumble.
BRIDGEPORT, CT・4 DAYS AGO
USA TODAY

Brad Marchand and Sidney Crosby are notable snubs for the 2022 NHL All-Star Game, which will be held in February in Las Vegas.
NHL・2 DAYS AGO
News 12

Detectives have identified the man killed a car crash in Medford on Jan. 4. Police say the victim has been identified as 29-year-old Saul Lozada, of Patchogue. The incident happened at the intersection of North Ocean Avenue and Masonic Avenue at around 10:20 p.m. Lozada was crossing the street when...
PATCHOGUE, NY・4 DAYS AGO

Bridgeport police are hoping new surveillance video will lead them to the suspects wanted for the ambush-style death of a 22-year-old man. They say four men and the two cars seen in the video are believed to be connected to the March 17 killing of Benjamin Bagley. Bagley was shot...
BRIDGEPORT, CT・6 DAYS AGO
News 12

Wave of evictions looms with moratorium set to expire on Saturday

A wave of evictions looms as the state eviction moratorium is set to expire this Saturday. Westchester County has had the second most eviction filings in the state during the pandemic. Although tenants are protected from evictions if they apply for the state's Emergency Rental Assistance Program, funding has run...
WESTCHESTER COUNTY, NY・3 DAYS AGO
97.1 The Ticket

Individually, Larkin has had a great season. His resurgence has been crucial for the Red Wings, who look to have a No. 1 center moving forward.
NHL・2 DAYS AGO
News 12

Police have identified the victim this week’s homicide in Ulster County. State police say 29-year-old Michael Hankins was shot by Walter Post, 26, on Vinegar Hill Road in the town of Shawangunk Tuesday. So far, state police have not released a motive but several people who know the men...
ULSTER COUNTY, NY・3 DAYS AGO
News 12

A woman who drove her car into a bank was suffering from a medical condition, according to Yonkers police. The wild crash at the HSBC bank building on Nepperhan Avenue was caught on camera around 6 p.m. Monday. The woman was at the McDonald's drive-thru across the street when she...
YONKERS, NY・4 DAYS AGO
News 12

Westport police searched for a 22-year-old woman in the Saugatuck River Thursday. Police say late Thursday night, it was discovered that the missing woman had exited the river and entered a local business where she was seen on surveillance cameras. They say Sara Levy was seen in a canoe near...
WESTPORT, NY・3 DAYS AGO
News 12

A fire damaged numerous businesses in a Suffern commercial building this morning. The fire broke out shortly after 6 a.m. at 83 Lafayette Ave. and quickly went to an all-hands situation. In addition to the Suffern FD, about 75 firefighters responded from area fire departments including:. · Hillburn Fire Department...
ROCKLAND COUNTY, NY・4 DAYS AGO
News 12

STORM WATCH: Temps dive ahead of coastal storm this weekend

There is a storm watch in effect now through 12 p.m. Monday ahead of the weekend storm. Friday will feature morning clouds giving way to some sunshine in the afternoon. It will turn windy and colder through the day. We will be watching a storm off the coast Friday, but...
LITCHFIELD, CT・3 DAYS AGO