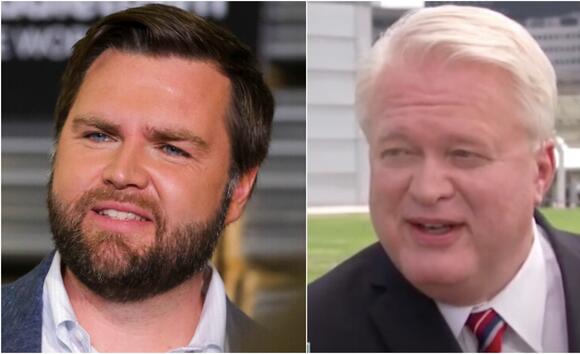 Republicans seeking their party’s nomination for Senate in Ohio are training their sites on J.D. Vance as the conservative populist makes inroads with GOP primary voters.

In the latest salvo, businessman Mike Gibbons is unleashing a $500,000 statewide advertising buy that recalls Vance’s initial opposition to former President Donald Trump in the 2016 presidential campaign and accuses him of being a “RINO” (Republican in Name Only). Gibbons is pledging to spend $10 million of his personal fortune on television and other advertising through Ohio’s May 3 primary election, and for now, Vance is his main target.

“Who’s cheering for the wrong team? J.D. Vance. Vance called President Trump an ‘idiot’ and ‘reprehensible,’” says the voice-over in a 30-second television spot unveiled by the Gibbons campaign on Wednesday and first shared with the Washington Examiner . From there, the ad moves to an old clip of Vance criticizing Trump.

“I’m a Never Trump guy. I never liked him,” Vance says. “I might have to hold my nose and vote for Hillary Clinton.” Next, the ad shifts to Gibbons talking straight to the camera: “J.D. Vance is not on our team,” he says.

“Ohioans are tired of RINOs who are willing to say anything to get elected,” Gibbons campaign spokeswoman Samantha Cotton said. Gibbons, a wealthy businessman with a range of financial interests, ran for Senate in 2018 but lost in the Republican primary to then-Rep. Jim Renacci, who in 2022 is challenging Gov. Mike DeWine for the GOP nomination.

The Vance campaign said Gibbons's attack is proof that the first-time candidate is on the rise.

“When everybody from the left-wing media to failed Senate candidates and their D.C. establishment allies are spending millions attacking J.D., it means only one thing: J.D. is winning,” said Vance campaign spokesman Taylor Van Kirk.

Vance, the author of the bestselling memoir Hillbilly Elegy and a venture capitalist by trade, began the 2016 election cycle a sharp Trump critic but later emerged as a staunch supporter of the former president. As Vance’s prospects have risen in the crowded Ohio Senate primary, more of his competitors have begun taking aim at his candidacy, with a primary charge being that he is a faux Trump supporter.

Vance denies claims that his change of heart surrounding Trump is phony and part of a naked attempt to win higher office, saying his mind changed as he watched the former president govern and realized what he meant to people like those he grew up with in rural Ohio.

Although Trump is often suspicious of converts such as Vance, it is probably a major boost to his Senate campaign that so many close supporters of the former president are backing his bid.

Venture capitalist and GOP megadonor Peter Thiel, a major financier of Trump’s political efforts, is funding a super PAC supporting Vance with several million dollars of his own money. Meanwhile, a host of conservative activists who are big Trump backers are backing Vance’s campaign.

President Joe Biden's renewed focus on former President Donald Trump ushers in the midterm election season and may also preview a rematch in 2024.
7 HOURS AGO
WashingtonExaminer

Neither of Donald Trump's impeachment trials led to his conviction, which would have prevented him from returning to the White House. Rep. Jamie Raskin has another idea on how to bar the former president.
POTUS・47 MINUTES AGO
WashingtonExaminer

"I think anyone with common sense would be reluctant to go talk to this committee," the GOP congressman said.
CONGRESS & COURTS・20 HOURS AGO
Newsweek

Former president Trump said that President Biden had made Dr. Anthony Fauci "like a king" during comments to supporters.
ARIZONA STATE・1 DAY AGO
The Guardian

Former President Donald Trump touched down in Arizona Saturday for his first rally of the midterm election year, bringing the spotlight to a state that will have hotly contested races for governor and the U.S. Senate in November. In the governor's race, Trump has endorsed Kari Lake, a former news...
ARIZONA STATE・1 DAY AGO

Former President Donald Trump is stepping up his election-year effort to dominate the Republican Party with a Saturday rally in Arizona in which he plans to castigate anyone who dares to question his lie that the 2020 presidential election was stolen, likely including the state’s GOP governor, Doug Ducey.But 2,000 miles to the east in Washington, there are small signs that some Republicans are tiring of the charade. Mike Rounds, the generally unassuming senator from South Dakota, was perhaps the boldest in acknowledging the reality that the election was in fact fair. Instead of being shunned, he was supported...
PRESIDENTIAL ELECTION・2 DAYS AGO
News 5 Cleveland WEWS

Republican U.S. Senate hopeful J.D. Vance took his “No BS Tour” to Independence Friday, kicking off the second day of a six-day 13-city tour of the state.
INDEPENDENCE, OH・2 DAYS AGO
WashingtonExaminer

'What a moron. Jesus Christ': Quotes of the Week

Democrats pivoted away from spending to focus on voting rights, but the sweeping legislation that the president and Sen. Chuck Schumer promised they would deliver appears as dead as Build Back Better.
U.S. POLITICS・2 DAYS AGO
HuffingtonPost

J.D. Vance: Make It Illegal For Lawmakers To Trade Stock

TOLEDO, Ohio — Senate candidate J.D. Vance said lawmakers should be banned from trading stocks while in office, joining a cause gaining momentum on both sides of the aisle. “I think it should be illegal for members of Congress to trade stocks in this country,” the Republican said at a town hall event on Thursday. “That is something you can actually get done on a bipartisan level.”
TOLEDO, OH・3 DAYS AGO

Writer J.D. Vance exploded onto the literary and political stage with his best-selling memoir “Hillbilly Elegy.” He grew up in a collapsing Rust Belt town in Ohio, raised by his grandmother while his mother battled an opioid addiction. He later joined the Marines and graduated from Yale Law School. Today, his story is well known, but when his memoir came out in summer 2016, Vance became an intermediary between coastal liberal enclaves and the working class supporters of then-Republican presidential candidate Donald Trump.
BOOKS & LITERATURE・3 DAYS AGO
Deseret News

Utah’s two Republican senators condemned Democrats’ effort to eliminate the Senate filibuster as President Joe Biden said Tuesday there is “no option” but to eliminate the rule to pave the way for sweeping voting rights legislation. “Let the majority prevail,” the president said in a forceful...
PRESIDENTIAL ELECTION・5 DAYS AGO
Newsweek

"The election was fair, as fair as we have seen. "We simply did not win the election, as Republicans, for the presidency," Rounds told ABC News.
PRESIDENTIAL ELECTION・7 DAYS AGO

J.D. Vance Has Turned a 30 Rock Joke Into a Viable Political Strategy

For the past few months, Simon van Zuylen-Wood has been trying to get inside the head of one guy: Ohio Senate candidate J.D. Vance. “Vance has interested me ever since his bestselling memoir, Hillbilly Elegy, was published in 2016,” van Zuylen-Wood said. “Everybody was talking about Hillbilly Elegy, whether they loved it or hate it. He had this Virgil-like identity.”
PRESIDENTIAL ELECTION・6 DAYS AGO
WashingtonExaminer

The trio of Republicans vying for Senate in Alabama is refusing to follow the lead of former President Donald Trump and demand the ouster of Senate Minority Leader Mitch McConnell.
ALABAMA STATE・6 DAYS AGO
tennesseestar.com

Author, attorney and venture capitalist J.D. Vance, a candidate for U.S. Senate in Ohio, will launch a statewide tour to connect with voters before this year’s primary election. “The No BS Townhall Tour is about being honest with Ohioans and answering all of their questions directly,” Vance said. “Every...
OHIO STATE・6 DAYS AGO
Washington Times