Democrats are feuding over tax breaks for people earning up to $550,000: 'We're really talking about folks who are in the top 2%' 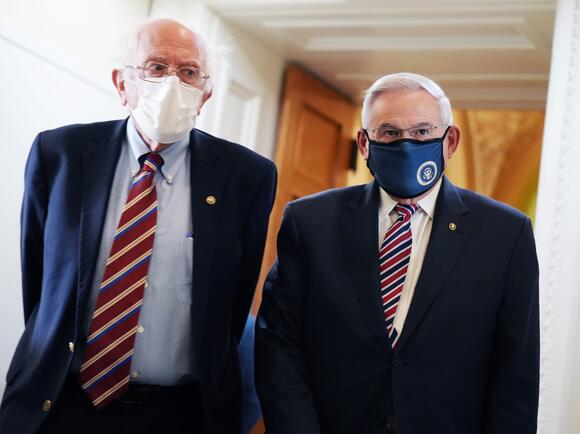 A major fight is brewing among Senate Democrats that will determine which well-off Americans receive a tax cut in President Joe Biden's $2 trillion social spending plan.

In recent weeks, Sen. Bernie Sanders of Vermont and Sen. Bob Menendez of New Jersey teamed up to map out a proposal to provide relief from the $10,000 cap on the state and local taxes taxpayers are able to deduct from their federal bill (SALT). Despite Democratic pledges to tax the rich, it's bound to scale back tax increases on wealthier households. Many Democrats are uneasy with the measure and it has exposed them to intense Republican attacks that Biden is handing blue-state millionaires a hefty tax break.

The pair's efforts are hitting a brick wall. Menendez and Sanders separately told reporters in recent days that they're sharply diverging on an income cutoff for taxpayers to qualify. The New Jersey Democrat has floated unlimited SALT deductions for individuals earning up to $550,000, while Sanders want to lower the threshold to $400,000.

"We're really talking about folks who are in the top 2%, whether they'll receive a tax increase or cut," Andy Boardman, a research assistant at the Urban Policy Institute, told Insider.

Few details of the Menendez-Sanders plan have been made public, making finer points like a potential phase-out harder to scrutinize. But a higher income threshold ensures even larger benefits flow to the wealthy, which many Democrats are desperate to avoid.

"It becomes more costly, more regressive," Mark Goldwein, senior policy director at the Committee for a Responsible Federal Budget, told Insider. The CRFB has projected that 90% of the benefit would go to households in the top fifth of the income spectrum if the threshold was set at $500,000.

Boardman added that another clash stemmed from whether any new money raised should go towards financing other safety net provisions like expanded Medicare benefits as Sanders wants. "We're in this sort of irresistible force meets the immovable object phase of the negotiation."

Where SALT talks go from here

Democrats from high-tax states like New York and California are pushing to roll back the SALT cap, unwinding part of the 2017 GOP tax cuts in the process. House Democrats approved legislation to allow up to $80,000 in SALT write-offs through 2030, but that's likely to undergo major changes in the Senate. Many in the party are anxious about strongly tilting the bill's benefits in favor of higher-earners.

Sen. Mark Warner of Virginia, a member of the tax-writing Senate Finance Committee, said SALT adjustments designed in a "way too generous way" would allow well-off Americans to disproportionately reap tax benefits, particularly after unwinding the 2017 tax cuts was taken off the table . "That's pretty problematic for me," he told Insider.

"I supported the concept Bernie put forth, that basically there was a cap but it would diminish as income went up. I don't think it should be unlimited," Sen. Angus King of Maine told Insider.

Senate Democrats are racing to approve the social legislation by Christmas Day, but the escalating SALT dispute threatens to derail their timetable. It prompted Senate Majority Leader Chuck Schumer to call a meeting in his Capitol Hill office on Tuesday afternoon in hope of inching closer to a resolution.

Sanders, Menendez, and King, as well as Sens. Michael Bennet of Colorado and Elizabeth Warren of Massachusetts were among the eight Democrats that attended. They left with no sign of a deal.

A Menendez spokesperson told Insider that "any attempt to raise revenue is a non-starter" for the New Jersey Democrat, adding "a revenue-neutral proposal on SALT is the only viable path forward."

Then a Bennet spokesperson described the meeting as "productive" and reiterated the Colorado Democrat's belief that the House SALT measure is "unacceptable."

Despite the obstacles, key negotiators recognize that some deal must be struck if they want to pass the package. "We got to reach compromise," Sanders told Insider. "A lot of people feel good about it."

This always happens when Democrats promise to raise the taxes on the rich. It has to be passed by the rich so it never happens. We all end up paying and the middle class pays the most since they outnumber everyone else...

Why are you feuding. It should apply to anyone making over 550,000 a year people. They should have to pay their fair share in taxes. Just like any other American. PERIOD!!!

flat tax then everyone pays ! no loop holes no deductions ! nothing ! want kids ?? pay for your own kids !

Manchin also scoffed at the notion that he should be afraid of any potential primary challenger.
CONGRESS & COURTS・10 HOURS AGO
POLITICO

More than any other senator, Jeff Merkley has frayed the fabric of the chamber’s vaunted 60-vote threshold. And he doesn’t mind if that’s used against his own party in the future.
WASHINGTON, DC・14 HOURS AGO
WATE

Senate Dems determined to save Build Back Better package

WASHINGTON (Nexstar) — President Biden kicked off his second year in office and Democrats are trying to press reset in order to move the president’s agenda forward. That includes trying to pass the Build Back Better package which failed to pass last year. Democratic leaders believe a version of Build Back Better can still become […]
CONGRESS & COURTS・15 HOURS AGO
Business Insider

Bernie Sanders responds to Biden's 'I'm not a socialist' remark

"They have not had to cast one bloody vote — which shows us where they're at," Sanders said of the legislative inaction. "We have got to change that."
VERMONT STATE・2 DAYS AGO
Business Insider

Elizabeth Warren says $20,000 in student loan debt 'might as well be $20 million' for people who are working at minimum wage

Warren expressed her support for protests or a debt strike should student-loan forgiveness continue to be put on the back burner.
CONGRESS & COURTS・1 DAY AGO
The Independent

Sen Bernie Sanders appeared eager to escalate the war between various factions of the Democratic Party on Sunday during an interview with CNN in which he stated his support for the censure and potential primarying of a senator who voted against the party’s effort to change the filibuster and pass voting rights legislation.Mr Sanders appeared on CNN’s State of the Union and said that the Arizona Democratic Party was “exactly right” to censure their state senator after Ms Sinema voted with Republicans last week against the Democrats’ voting rights push.“On that particular vote that she and [Sen Joe] Manchin...
CONGRESS & COURTS・2 DAYS AGO

The Republican Party is working overtime to suppress the vote and undermine American democracy. It is a party which ignores climate change, the existential threat to our planet and represents the interests of the wealthy and the powerful while turning its back on struggling working-class families. The GOP is the party that gives tax breaks […] The post Bernie Sanders: The time for Senate talk is over. We need to vote appeared first on The Atlanta Voice.
PRESIDENTIAL ELECTION・2 DAYS AGO
The Columbus Dispatch

Letters: Rule-preserving Democrats living in a filibuster fantasy world. We have not overcome.

Filibuster leads to 'stagnation,' not moderation During her recent tone-deaf floor speech, Sen. Kyrsten Sinema suggested that  the filibuster would protect the American public from “wild swings in public policy.” But I contend such swings could ultimately be good for democracy.  Let the majority enact its policies, let's see if they work, and if they don’t, the American...
COLUMBUS, OH・2 DAYS AGO
KSN.com

‘We need people who will stand up for us’: Advocates frustrated with Democrats’ failure on immigration reform

EL PASO, Texas (Border Report) – With a Democratic majority in both houses of Congress, all that President Joe Biden and his party’s leadership need to bring about immigration reform this year is political will, migrant advocates said on Friday. And if they don’t do it now, the...
IMMIGRATION・4 DAYS AGO
Business Insider

Manchin remains peeved over a White House statement that singled him out, The Washington Post reported.
CONGRESS & COURTS・16 HOURS AGO

Democrats staked everything on a doomed effort to end the filibuster and pass voting legislation. The results were no surprise.
PRESIDENTIAL ELECTION・20 HOURS AGO
Business Insider

After Democrats' voting rights bill failed, a bipartisan agreement to reform how Congress counts electoral votes may be the next best bet.
PRESIDENTIAL ELECTION・1 DAY AGO
Newsweek

Joe Biden s run for the Democratic presidential nomination was all but declared dead as he headed to the South Carolina primary in late February 2020. He had finished fifth in New Hampshire and fourth in Iowa. Still, Biden advised skeptics to withhold judgment until a state with a large pool of Black voters, the most reliable Democratic constituency, had a chance to weigh in.“Too often your loyalty, your commitment, your support for this party has been taken for granted,” he said. “I give you my word as a Biden that I never, ever, ever will.”Black voters delivered, recasting...
PRESIDENTIAL ELECTION・2 DAYS AGO

Biden said this week he will try to get "chunks" of his economic agenda passed after Manchin tanked it. But it's unclear if Sen. Joe Manchin will budge on his initial concerns, like the expanded child tax credit. When it comes to the climate, though, Democrats may have an agreement...
CONGRESS & COURTS・4 DAYS AGO
Newsweek

"Perhaps this means some of our colleagues will miss out on lucrative investment opportunities. We don't care," the lawmakers said.
CONGRESS & COURTS・1 DAY AGO
Business Insider

The bipartisan letter comes after Pelosi reversed course, saying she's open to a ban. "If members want to do that, I'm OK with that," she said.
MAINE STATE・1 DAY AGO
POLITICO

"March 1 is not a deadline for one thing or another," he said at a POLITICO event. What happened: Majority Leader Steny Hoyer took a pragmatic tone about the future of the Democrats' climate change and social spending bill during an interview with POLITICO on Tuesday, insisting the March 1 State of the Union address should be viewed as an artificial deadline.
CONGRESS & COURTS・12 HOURS AGO