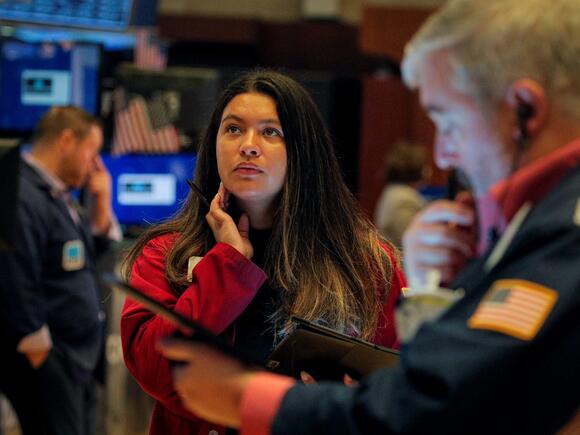 US stocks pushed higher Wednesday as data showed growth in hiring by US companies last month, after a rout in the previous session swiped nearly 2% off the S&P 500 index.

Wall Street's three marquee equity indexes climbed, with gains for Apple and Disney helping the Dow rebound from Tuesday's slide of 652 points. Stocks had sold off on worries that the Omicron variant of the coronavirus would derail the global economic recovery, while Federal Reserve Chair Jerome Powell told the Senate Banking Committee the strain could increase uncertainty for inflation and suggested the central bank's tapering of bond buys could quicken.

Powell will return to Capitol Hill on Wednesday, testifying before the House Financial Services Committee.

Omicron fears eased with scientists at the University of Oxford saying Tuesday "there is no evidence so far" that the variant is resistant to the vaccines currently available. Earlier, Moderna's CEO warned vaccines could be less effective against it.

Meanwhile, ADP said early Wednesday private US employers added 534,000 jobs in November , a better reading than the 525,000 jobs expected in an Econoday survey of economists. The report arrived ahead of Friday's nonfarm payrolls report from the Labor Department.

"The market wants to see this continued [jobs] improvement but not too rapid of an improvement. It doesn't want to see things moving too fast because that moves up the timeline for when the Fed starts to raise rates," said Thomas.

"The market does want to see more jobs out there because that means there's more money in people's hands that can be spent in the economy. But we don't want to see the labor market get too tight and the unemployment rate to move down significantly — that would probably not be taken as well," he said.

Around the markets, Cathie Wood's Ark Invest bought about $49 million worth of Twitter shares on Tuesday, taking advantage of the stock's drop after Jack Dorsey said he would step down as CEO.

Legendary investor Ray Dalio warned investors against trying to time the market as it faces uncertainty about the Omicron coronavirus variant.

The S&P 500 was on course to rise Thursday after two sessions of losses. Stocks moved higher after data showed the US economy grew by 6.9% in the fourth quarter. Equities also rose after data showed weekly jobless claims fell by 30,000. US stocks rose Thursday, putting the S&P 500...
STOCKS・15 HOURS AGO
ShareCast

London stocks edged down in early trade on Thursday following heavy losses in Asia, after the US Federal Reserve struck a hawkish note overnight. At 0840 GMT, the FTSE 100 was down 0.2% at 7,454.07, as investors waded through a raft of corporate news. CMC Markets analyst Michael Hewson said:...
STOCKS・21 HOURS AGO
Markets Insider

US pandemic aid was 'a lot' – but it fueled a world-beating recovery and inflation is being managed, Fed's Powell says

Pandemic stimulus "was a lot," but it fueled a superlative recovery, Fed Chair Jerome Powell said on Wednesday. It's "too early" to tell whether the aid helped create the highest inflation in 40 years, he added. Still, the current recovery is extraordinarily fast and beats most other countries' rebounds.
BUSINESS・13 HOURS AGO
Markets Insider

The Fed said Wednesday it "will soon be appropriate" to raise rates, and signs point to the first hike arriving as early as its March meeting.
BUSINESS・1 DAY AGO

Bitcoin was attempting to rally this week, but the Fed and Jerome Powell stamped out the rebound. Markets are now expecting five interest rate hikes in 2022, according to Bloomberg data, following Wednesday's Fed meeting. Analysts expect unprofitable technology stocks and crypto to stay under pressure for a while yet.
MARKETS・15 HOURS AGO
ShareCast

London stocks had moved into the black by midday on Thursday, with banks pacing the advance after the US Federal Reserve struck a hawkish note overnight. The FTSE 100 was up 0.4% at 7,496.63, reversing earlier losses. Stocks had opened in the red after US Federal Reserve chair Jerome Powell...
MARKETS・18 HOURS AGO
actionforex.com

Jerome Powell didn’t really sooth investors’ nerves at yesterday’s policy statement. He said that the Federal Reserve (Fed) won’t refrain from back-to-back rate hikes to get the inflation situation straight. His words sent the US stocks lower, and the US dollar higher. Apparently, the recent market...
BUSINESS・23 HOURS AGO
actionforex.com

Markets will continue to digest yesterday’s FOMC message and watch out for Russia-Ukraine headlines, amid a light data calendar in Europe. US Q4 21 GDP figures are released and we expect them to show that the economic recovery continued at the end of 2021, despite the new COVID-19 wave. The weekly initial jobless claims will also be monitored for COVID-19 effects on the labour market, after claims had increased in recent weeks.
BUSINESS・23 HOURS AGO

Another rebound despite hawkish Fed

It’s been a remarkable week so far in financial markets and it seems there’s still plenty more to come. It’s been a tough month for investors, forced to watch on as central bank tightening expectations hammered risk appetite and, in turn, stock markets. This has been largely accepted as a consequence of inflation being allowed to run hot for too long but this week, the fightback has started.
BUSINESS・14 HOURS AGO
NBC News

NEW YORK, Jan 27 (Reuters) - The Federal Reserve’s hawkish shift is bolstering the case for investors looking to trim risk from their portfolios, as the U.S. central bank trains its guns on surging inflation while giving little indication that it will be swayed by the latest weakness in stocks.
BUSINESS・16 HOURS AGO

Stock markets sold off while Treasuries were rocked by the FOMC’s stance even as there weren’t really any surprises. The release of the document on “Principles for Reducing the Size of Federal Reserve’s Balance Sheet” that broadly outlined the shrinkage with no real details, and Powell’s suggestion that the runoff might have to be faster than in the prior cycle, struck a nerve.
STOCKS・20 HOURS AGO
Markets Insider

The S&P 500 fell for a third straight session on Thursday after rallying earlier in the day. The Nasdaq Composite also turned lower as investors price in rate hikes by the Federal Reserve. Stocks got an initial bounce after data showed fourth-quarter GDP grew at a 6.9% rate, faster than...
STOCKS・9 HOURS AGO
Markets Insider

"This has been exactly how the great bubbles have broken," Jeremy Grantham said. "It's almost eerily classic."
STOCKS・15 HOURS AGO
KCBS News Radio

Should you be worried about the stock market rollercoaster?

The stock market on Monday opened with its largest drop since the beginning of the pandemic, with the Dow Jones Industrial Average lowering more than 1,000 points — and it looks like this financial rollercoaster won’t be slowing down any time soon.
STOCKS・2 DAYS AGO
Markets Insider

US stock futures rise sharply after another day of wild volatility, with all eyes on the Fed decision

US stock futures rose sharply Wednesday as focus turned to the Federal Reserve decision due later. The Fed is expected to hold interest rates steady but make clear that it intends to hike in March. Stocks have tumbled this year as the US central bank gears up to cut its...
STOCKS・1 DAY AGO
Markets Insider

US stocks gave up steep gains on Wednesday after the Fed gave surprisingly hawkish signals on the path of rate hikes this year. Fed Chair Jerome Powell admitted that a rate hike in every FOMC meeting is not off the table. He also warned there's a risk inflation will stay...
STOCKS・1 DAY AGO
The Motley Fool

While Wall Street resets expectations around higher interest rates, investors are jumping back in.
STOCKS・1 DAY AGO
Markets Insider