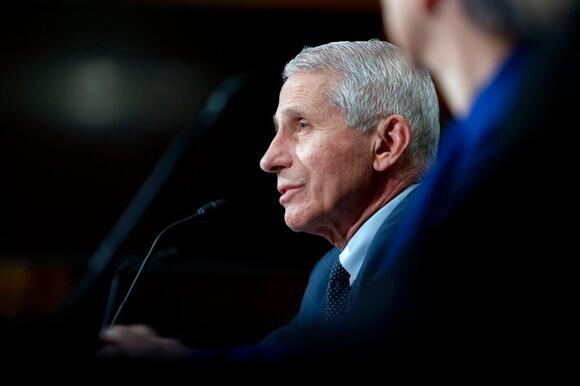 ( The Hill ) — Anthony Fauci has taken GOP anger with him to a new level by stating that Republicans who criticize him are “really criticizing science because I represent science.”

The right exploded at the weekend remarks from an interview with “Face the Nation” host Margaret Brennan, arguing that the comments underscore a scolding presence from the government’s foremost expert on infectious diseases that belittles concerns from their voters about his coronavirus advice.

“It’s astounding and alarming that a public health bureaucrat would even think to claim such a thing,” fumed Sen. Rand Paul (R-Ky.), who has repeatedly feuded with Fauci at public hearings over the past several years.

Sen. Tom Cotton (R-Ark.) grumbled that the comments were “just another example of how these bureaucrats think that they are the science, that they represent the epitome of knowledge.”

Republicans have long seen Fauci as a useful punching bag given the public’s fatigue with the coronavirus, and his standing as a health care adviser to President Joe Biden has made him more of a partisan figure this year.

Cotton on Tuesday said, “Tony Fauci is nothing more than a Democratic operative,” a sentiment that appears to be growing in GOP circles.

Criticism of Fauci has served as a sure-fire way to rev up the GOP’s conservative base and appeal to former President Donald Trump , offering an incentive for GOP senators with national ambitions to take their shots. Cotton is seen as a potential presidential candidate, while Paul was defeated in the 2016 GOP primary by Trump.

Sen. Ted Cruz (Texas), another 2016 GOP presidential candidate who many think will run again, has led the GOP charge. As of Tuesday afternoon, he had tweeted or retweeted something critical about Fauci at least 20 times since Monday.

One such retweet circulated a DailyMail.com article in which Cruz calls Fauci “the most dangerous bureaucrat in the history of America” and says he could face prison time for denying that the National Institutes of Health (NIH) had funded gain-of-function virus research at a lab in Wuhan, China.

Attacks on Fauci over the past 18 months have often been ugly and have led to concerns for his safety.

Lara Logan, a host on Fox News Media’s streaming service, on Monday compared him to Nazi doctor Josef Mengele, who worked at Auschwitz during the Holocaust. The Auschwitz Memorial and Museum were among those condemning the remarks, which it said were “exploiting the tragedy of people who became victims of criminal pseudo-medical experiments in Auschwitz in a debate about vaccines, pandemic and people who fight for saving human lives is shameful.”

Some Republicans have long worried the attacks by their colleagues could undermine trust in public health officials and their own efforts to boost vaccination rates across the country.

“A lot of politics today is performance politics, which is saying things which excite the bases of our respective parties,” said Sen. Mitt Romney (Utah) when asked about the salvos directed at Fauci from fellow Republican senators.

“I look at Dr. Fauci as an expert in disease and viruses [and] respect his point of view. He’s not perfect; like all humans he will make mistakes. Politicizing him is just par for the course these days in our highly politicized environment, but I respect him as a scientist,” he added.

Other Senate Republicans are also distancing themselves from the attacks on Fauci.

“I think everybody’s had a really challenging job with a virus that we are still struggling to understand, and both the data and the science appear to be constantly changing so everybody in those discussions can easily find themselves in a tough place,” said Sen. Roy Blunt (Mo.), the ranking Republican on the Labor, Health and Human Services Appropriations Subcommittee.

“I’ve known him a long time and I like him, and I’ve admired his work with vaccines,” he added of Fauci. “I think probably he’s been trying to explain a very hard thing for a long time and a lot of circumstances change and that’s a tough place to be.”

Romney acknowledged that efforts to demonize Fauci “seems to be working politically.”

“I think that’s one of the unfortunate realities of our new performance politics,” he added, warning “there’s no question” that attacks on public health officials are undermining public confidence in health recommendations, such as advice to get vaccinated.

Fauci has not taken criticism from Paul without firing back, telling the Kentucky senator in a July hearing after Paul suggested he had lied to Congress: “Sen. Paul, you do not know what you are talking about, quite frankly.”

Fauci’s Republican critics are quick to point out the times he’s been wrong, such as early during the pandemic when he and other health officials initially counseled against wearing masks. Fauci explained that he worried there wouldn’t be enough protective equipment for health care providers and the transmissibility of the virus still wasn’t well understood.

He also took heat from critics in October for saying it was “too soon to tell” whether people would be able to gather with their families for Christmas, comments he later said were misrepresented.

But the biggest bone of contention with conservatives is his denial at a Senate hearing in May that NIH had funded gain-of-function research in Wuhan through EcoHealth Alliance, a nongovernmental organization.

Cruz and Paul say that new evidence shows that Fauci misrepresented the facts, but the NIH hasn’t acknowledged the research in question met the criteria for gain-of-function research.

“He hasn’t had Fauci out much lately and the reason is because he’s got high negatives. More than half the voters are unfavorable to the guy now,” McLaughlin said, referring to Fauci’s approval numbers. “People don’t trust him anymore. Look, Democrats like him, think he’s good, but I’m telling you, the Republican base and the swing voters don’t trust him anymore. They think he’s a political hack.”

Fauci was standing next to Biden on Monday, however, when the president offered remarks about the new omicron variant that has sparked new worries about the pandemic. This suggests Biden sees more benefits than negatives to working with Fauci.

Fauci, who is 80 years old, says he doesn’t plan to step down from his position as chief medical adviser to Biden and as director of the National Institute of Allergy and Infectious Diseases until the COVID-19 pandemic is “in the rearview mirror.”

“I’m going to keep doing that until this COVID-19 outbreak is in the rearview mirror, regardless of what anybody says about me, or wants to lie and create crazy fabrications because of political motivations,” he told CBS earlier this month.

Police were called to the 100 block of Frank Street around 3:30 p.m.
STRUTHERS, OH・16 HOURS AGO
WKBN

President Joe Biden will appear in Pittsburgh on Friday as an opening step in a broader campaign to promote the White House's achievements in key states before the midterm elections.
PITTSBURGH, PA・21 HOURS AGO
WKBN

A Warren man is facing several charges after humane agents removed dogs from his home.
WARREN, OH・17 HOURS AGO
The Guardian

‘The most dangerous man in Congress’: how Paul Gosar became a darling of the far right

The Arizona Republican congressman Paul Gosar had a simple message for the crowd when he recently addressed a packed Donald Trump rally in his home state – a gathering that had focused on promoting the baseless lie that Trump had been cheated out of a second term as president.
CONGRESS & COURTS・3 DAYS AGO

Analysis: president faces high expectations as he prepares make one of his most consequential decisions
CONGRESS & COURTS・2 DAYS AGO
Newsweek

A full year into President Joe Biden's term, Americans have watched the China-originated COVID-19 virus work its way through half of the Greek alphabet.
PUBLIC HEALTH・2 DAYS AGO
Business Insider

Biden pushed through a record number of judicial confirmations his first year in office and is a Senate judiciary veteran. He knows how to do this.
PRESIDENTIAL ELECTION・2 DAYS AGO
MSNBC

GOP senator tries to capitalize on Fauci calling him a 'moron'

For Sen. Roger Marshall, it was an unfortunate moment. During a committee hearing, the Kansas Republican badgered Dr. Anthony Fauci about his financial disclosure documents, which are readily available, but which the confused senator couldn't find. As we discussed after the hearing, the two went back and forth for a...
CONGRESS & COURTS・9 DAYS AGO

U.S. Senator Roger Marshall (R-KS) went on Steve Bannon’s War Room podcast this week and accused Dr. Anthony Fauci of being part of a “Deep State” conspiracy, which he suggests is behind the Covid-19 pandemic. “What is your endgame?” Bannon asked Marshall in regard to his investigations...
CONGRESS & COURTS・10 DAYS AGO
Fox News

Fauci, COVID-19 origins to be investigated if House flips back to GOP control in 2022: Jim Jordan

Rep. Jim Jordan, R-Ohio, vowed Sunday to uncover what Dr. Anthony Fauci knew about the origins of the coronavirus pandemic if Congress flips back to Republican control after the 2022 midterm elections. This comes after Jordan and other Republican leaders on the House Oversight and Judiciary committees released excerpts of...
CONGRESS & COURTS・12 DAYS AGO
Salon

McConnell said he would give Biden's nominee "a fair look" on the same day he warned the president against choosing a judge from "the radical left."
CONGRESS & COURTS・1 DAY AGO

Poll: Nearly 6 in 10 Republicans say they will not vote for any candidate who admits Biden won 'fair and square'

Despite a mountain of evidence showing the 2020 presidential contest wasn’t rigged against Donald Trump, nearly 6 in 10 Republicans and Republican-leaning independents (57 percent) now say they will not vote in upcoming elections for any candidate who admits that Joe Biden won the presidency "fair and square." Only...
PRESIDENTIAL ELECTION・1 DAY AGO
The Guardian

President urged to make good on promise to pick Black woman to fill vacancy, with Stephen Breyer to retire as justice – follow the latest
PRESIDENTIAL ELECTION・2 DAYS AGO
The Guardian

Former Vice President Mike Pence said Thursday it is clear that his successors, President Joe Biden and Vice President Kamala Harris are picking up where Barack Obama left off in fundamentally transforming the American system into one that is hard-left. Pence also reacted to Harris' trip to Honduras to visit...
PRESIDENTIAL ELECTION・1 DAY AGO

Herschel Walker says it's 'totally unfair' to ask him if he supports the bipartisan infrastructure bill that passed last year: 'I have to see all the facts'

"I think you've gotta be an Alabama fan," Walker snapped when asked his views about the law.
GEORGIA STATE・16 HOURS AGO
Newsweek

The new poll also showed that Trump was trailing President Joe Biden in a rematch of the 2020 election.
PRESIDENTIAL ELECTION・1 DAY AGO
MSNBC

Economic growth so strong, the GOP is literally at a loss for words

"If all Democrats hang together ... they have the power to replace Justice Breyer in 2022 without one Republican vote in support," Graham said.
CONGRESS & COURTS・2 DAYS AGO