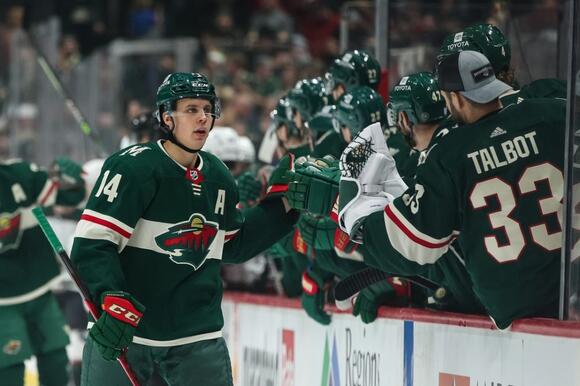 Jordan Greenway had a goal and two assists and Kirill Kaprizov and Jonas Brodin each had a goal and an assist to help lead the Minnesota Wild to their fourth straight win, 5-2, over the Arizona Coyotes on Tuesday night in Saint Paul, Minn.

It was a career-best three-point game for Greenway, who entered the contest with just three assists this season. Joel Eriksson Ek and Marcus Foligno also scored goals and Ryan Hartman added a pair of assists for Minnesota, which has scored at least four goals in 11 of its last 14 games. Kaapo Kahkonen made 29 saves as the Wild won for the eighth straight time against the Coyotes.

Clayton Keller had a goal and an assist and Anton Stralman also scored for Arizona, which was playing the second game of a back-to-back that began with a 1-0 victory at Winnipeg on Monday. Scott Wedgewood finished with 32 saves.

Keller gave Arizona a 1-0 lead at the 5:58 mark of the first period with a spinning shot from the right circle that went through defenseman Jon Merrill’s legs and in off the far post for his sixth goal of the season.

Minnesota came right back to tie it 68 seconds later when Eriksson Ek tapped in a rebound of a Dmitry Kulikov shot into a wide-open left side of the net for his ninth goal of the season.

The Wild then took control of the game with three goals in the second period to build a 4-1 lead. Kaprizov made it 2-1 with a spinning shot from near the blue line that went under the crossbar past a surprised Wedgewood for his seventh goal of the season.

Arizona cut it to 4-2 early in the third period on Stralman’s one-timer from the right point. But Minnesota answered less than two minutes later when Foligno backhanded in a rebound of a Brodin slap shot for his ninth goal of the season.

GLENDALE, Ariz. (AP) — Linus Ullmark stopped 30 shots, David Pastrnak had two assists and the Boston Bruins stretched their winning streak over the Arizona Coyotes to 17 straight games with a 2-1 win. Erik Haula and Charlie McAvoy each had goals to help Boston bounce back from blowing a two-goal lead in a loss to Colorado. Nick Schmaltz scored and Scott Wedgewood had 36 saves for the Coyotes, who haven’t beaten Boston since 2010 in the Czech Republic. Arizona has lost four straight.
NHL・8 HOURS AGO
AZCentral | The Arizona Republic

Wedgewood strong in goal, but Coyotes drop fourth straight with loss to Bruins

Friday night's 2-1 Coyotes loss to the Boston Bruins saw improved defensive play and goaltending compared to the most recent two games, but the Coyotes came away empty despite late heavy pressure to score a tying a goal in the final couple of minutes. Scott Wedgewood stopped 36 shots —17 in the third period — and gave the Coyotes a shot at overtime, but they couldn't push across a goal before the end of the third period and lost their fourth...
NHL・8 HOURS AGO
Sportsnaut

David Pastrnak may not have scored a goal tonight but he contributed once again in a big way. The Boston Bruins faced off with the Arizona Coyotes on Friday night, continuing their road trip. They managed to get back in the win column in the game as they defeated Arizona by a score of 2-1.
NHL・8 HOURS AGO

Linus Ullmark saved 29/30, Erik Haula scored his 5th of the season, David Pastrnak notched 2 assists, and Charlie McAvoy netted the game winner. The Bruins won their 17th in a row against the Coyotes. Arizona hasn't defeated Boston since Oct. 9, 2010, in Prague. "I thought we came out...
HOCKEY・7 HOURS AGO
Sportsnaut

Sabres’ goalie depth might improve for matchup with Coyotes

To say the Buffalo Sabres have been hit hard at the goaltender would be an understatement. However, there could be
NHL・5 HOURS AGO
Sportsnaut

Bruins notch latest in long line of victories vs Coyotes

Charlie McAvoy scored the go-ahead goal at 13:41 of the second period and Linus Ullmark stopped 30 of 31 shots
NHL・8 HOURS AGO
hockeyinsiders.net

The Boston Bruins and Colorado Avalanche played a very eventful game last night. The Avs came out to a 1-0 lead during the first period and the B's followed that up with 3 straight goals in the second period, however the Avs tired it up in the third and eventually won the game overtime.
NHL・1 DAY AGO

Colorado Avalanche star Nathan MacKinnon won't return to Wednesday's contest against the Boston Bruins after colliding with forward Taylor Hall during the opening period, the team announced. Hall knocked the shaft of MacKinnon's stick with his shoulder as the center tried to exit the zone, hitting him in the face...
NHL・2 DAYS AGO
WGR550

Many of the Sens described the hit as a cheap shot and the NHL felt that Batherson was not eligible to be body checked. In addition, it was a high shoulder check that caused Batherson to fall dangerously and with force into the back wall.
NHL・2 DAYS AGO
Sportsnaut

The NHL season officially started back on October 12. In this article, we track all the NHL games today as
NFL・1 HOUR AGO
Sportsnaut

37-year-old center Jeff Carter came to the Pens in April, he’s made such an impression, he received a contract extension after 12 goals & 14 assists this year
NHL・2 DAYS AGO
WFAN Sports Radio

The Columbus Blue Jackets activated defenseman Adam Boqvist from the NHL’s COVID-19 protocol Wednesday. Boqvist, who has missed the past
NHL・2 DAYS AGO

While the Edmonton Oilers always would prefer the security that comes from an early lead, falling behind will not deter
NHL・2 DAYS AGO
Audacy

Senators left wing Tyler Ennis scored his second career hat trick in Tuesday’s win over Buffalo (his former team), but only one hat was thrown onto the ice with no fans in attendance at the Canadian Tire Centre in Ottawa.
NHL・2 DAYS AGO
arizonawildcats.com

Prairie View, Tx. - No. 12 Arizona Wildcats defeated the PVAMU Panthers in two 7-0 sweeps on Thursday, Jan. 27 in Prairie View, Tx. This marks the third and fourth win of the spring season for the Wildcats. Arizona secured both of the doubles points in the morning and afternoon matches.
PRAIRIE VIEW, TX・2 DAYS AGO
hometownsource.com

Staring down a difficult stretch of four games in six days, against formidable opponents nonetheless, Milaca girls’ basketball Head Coach Lance Dalbey would have been happy making through the streak splitting the games. “If we can come out of there with a split, we would be tickled pink,” said...
MILACA, MN・2 DAYS AGO