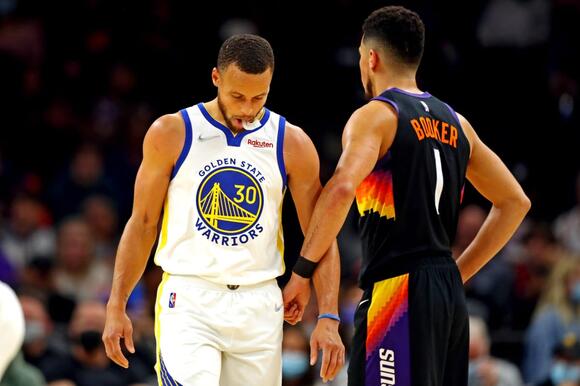 Devin Booker sent out a tweet after the Phoenix Suns defeated the Golden State Warriors.

Devin Booker and the Phoenix Suns won their 17th game in a row on Tuesday night when they defeated the Golden State Warriors 104-96 in Arizona.

The two teams now have the same record (18-3), which is the best in the entire NBA.

The All-Star shooting guard only played 15 minutes, because he left the game due to a hamstring injury.

Booker had 10 points, two rebounds and one assist in the minutes that he played.

The former Kentucky star is also shooting 45.8% from the field and 40.3% from the three-point range.

He made the playoffs for the first time in his career last year when the Suns made it all the way to the NBA Finals.

The Phoenix Suns are steamrolling the NBA once again. They became the first team to win 30 games this season due to their elite offense and even better defense. It’s not a matter of if, but who on Phoenix’s roster gets named an All-Star. Devin Booker has been...
PHOENIX, AZ・19 DAYS AGO
FastBreak on FanNation

The Utah Jazz are in Arizona to play the Phoenix Suns on Monday night.
NBA・2 DAYS AGO
FastBreak on FanNation

Rudy Gobert has been ruled out for Monday's game between the Utah Jazz and Phoenix Suns.
NBA・2 DAYS AGO
Sportsnaut

NBA Power Rankings: Suns and Warriors stay at the top

NBA power rankings: Now that the NBA season is in full swing, it’s time to rank all 30 teams. With
NBA・11 HOURS AGO
blackchronicle.com

The Phoenix Suns already created history this season, reeling off a franchise record 18-game win streak and after tonight’s 115-109 victory over the Utah Jazz, they extend their league-best run to seven games. NBA League Pass: Sign up to unlock live out-of-market games (7-day free trial) Sitting at the...
NBA・2 DAYS AGO
Yardbarker

The Phoenix Suns faced a hard fight from the short-handed Utah Jazz on Monday night, but the duo of Devin Booker and Chris Paul turned up the heat when the team needed it to secure a 115-109 win. Booker scored 33 points with seven rebounds and three assists, but Paul's...
NBA・2 DAYS AGO
FastBreak on FanNation

Ben Stinar and Haley Jordan sat down to talk about the Phoenix Suns in the latest episode of Stinar For 3.
NBA・1 DAY AGO

The Utah Jazz were in a good mood after playing the Phoenix Suns on Monday, considering they’d just lost for
NBA・1 DAY AGO
FastBreak on FanNation

Mike Conley has been ruled out for Monday's game between the Utah Jazz and Phoenix Suns.
NBA・2 DAYS AGO
FastBreak on FanNation

The Utah Jazz are facing off with the Phoenix Suns in Salt Lake City on Wednesday night.
NBA・17 HOURS AGO
ClutchPoints

The Phoenix Suns have no shortage of great players like Charles Barkely and Steve Nash who have suited up for the franchise in its long history. However, none of those players were able to step foot on the territory that Devin Booker just reached. On Wednesday against the Utah Jazz,...
NBA・3 HOURS AGO

Phoenix Suns guard Devin Booker shot out of the gate in Monday’s 115-109 victory over the visiting Utah Jazz. Booker put up 13 shots in the opening 12 minutes, and his 17 early points helped the Suns get an upper hand in what would be a competitive game. He...
NBA・2 DAYS AGO
Sportsnaut

Devin Booker scored 43 points and grabbed 12 rebounds as the Phoenix Suns increased their winning streak to eight with
NBA・3 HOURS AGO
charlottenews.net

The wife of NBA legend Steph Curry has called the gossip 'ridiculous'. The wife of Golden State Warriors star Steph Curry, Ayesha, has addressed rumors that the couple is in an open relationship, labeling the speculation 'disrespectful'. Claims circled on gossip blogs in recent weeks and cited an anonymous tip...
CHARLOTTE, NC・15 DAYS AGO
fadeawayworld.net

LeBron James has been one of the best players in NBA history throughout his career. James entered the NBA as just a teenager and has been spectacular for the entire time he has been in the league. James has been a great scorer for his entire career, and he is very close to a historic milestone.
NBA・22 HOURS AGO

Austin Reaves looked confused, and perhaps frustrated, as he tried to follow LeBron James' instructions during Tuesday's win over the Nets.
NBA・17 HOURS AGO
Chicago Tribune

In the final three minutes of Monday’s game in Oklahoma City, the Chicago Bulls panicked. Zach LaVine and Troy Brown Jr. ran straight into half-court traps. Nikola Vučevic sent off-balance 3-pointers sailing past the rim. Billy Donovan called timeouts in an urgent attempt to calm his team, watching as the Thunder carved a 28-point Bulls lead down to a single point. The bell ultimately saved ...
NBA・2 DAYS AGO
Audacy

After James Harden posted a triple-double in a 106-96 loss to the Lakers, the Nets star was asked about the reports that he is dissatisfied about some things with the team.
NBA・1 DAY AGO