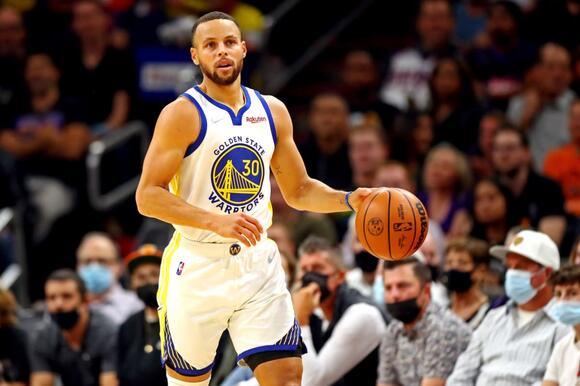 Steph Curry and the Golden State Warriors lost to the Phoenix Suns on Tuesday evening in Arizona.

Steph Curry and the Golden State Warriors came into Tuesday night against the Phoenix Suns with the best record in the NBA.

Curry had an unusually poor shooting night. The two-time MVP had 12 points, three rebounds and two assists but shot just 4/21 from the field.

The shooting performance was the worst of his entire career when taking 20 or more shots (see tweet below from Bleacher Report).

After the game, the three-time champion spoke to reporters.

"Driving lanes were there, I settled a lot," Curry said postgame. "It was tough for shots, I know I can make em', but when you don't got it going you gotta figure something out. That makes the open ones that you do get a little tougher, because you just don't have a rhythm."

The full clip of Curry talking about his shooting can be seen in a tweet that is embedded above from the Twitter account of Warriors on NBCS.

The wife of NBA legend Steph Curry has called the gossip 'ridiculous'. The wife of Golden State Warriors star Steph Curry, Ayesha, has addressed rumors that the couple is in an open relationship, labeling the speculation 'disrespectful'. Claims circled on gossip blogs in recent weeks and cited an anonymous tip...
CHARLOTTE, NC・6 DAYS AGO
FastBreak on FanNation

Steph Curry has been ruled out for Sunday's game between the Golden State Warriors and Minnesota Timberwolves.
NBA・1 DAY AGO
Cassius

NBA guard Steph Curry has undeniably cemented his place in NBA history. Now, the 33-year old NBA champion wants to share more of his history away from the game, too, with his plan for an eight-figure deal about his memoirs.
NBA・1 DAY AGO
ClutchPoints

After sitting out Friday’s game against the Chicago Bulls, Golden State Warriors star Klay Thompson could see a slight increase in his minutes on Sunday, according to Steve Kerr. Thompson was sidelined in their showdown with the Bulls as part of the Warriors’ system to slowly ease him back...
NBA・2 DAYS AGO

CHICAGO — Steph Curry was clearly bothered Friday night by an awkward fall he took in the second quarter, but he remained in the game anyway, frequently flexing the fingers on his right hand. The injury will, however, prevent Curry from playing in the finale of the Warriors’ four-game...
NBA・1 DAY AGO
FastBreak on FanNation

Cade Cunningham was ejected during the game between the Phoenix Suns and Detroit Pistons on Sunday afternoon in Michigan.
NBA・20 HOURS AGO
East Bay Times

Warriors analysis: Fix to Curry’s slump is keeping the ball in his hands

Trends, as fleeting as most are, always seep back into style and relevance. Nothing is ever new. There’s always some upgrade, some variation of the same thing. In the thick of the Golden State Warriors’ struggles on offense, the notion of Stephen Curry needing the ball in his hands isn’t a trend that’s “seeped” back into style. Instead, the thought on-ball or ISO Steph is aging like the finest of wines that Napa and Sonoma could produce.
NBA・1 DAY AGO
FastBreak on FanNation

Deandre Ayton hurt his ankle during the game between the Phoenix Suns and Detroit Pistons on Sunday afternoon in Michigan. The Suns have announced that it is an ankle sprain, and he has been ruled out for the remainder of the game.
NBA・20 HOURS AGO

Suns Starting Lineup And Injury Report For Game With Pistons

The Phoenix Suns are in Michigan to take on the Detroit Pistons on Sunday afternoon.
NBA・23 HOURS AGO
FanSided

Stephen Curry is no ordinary shooter. If there is one thing the Golden State Warriors superstar has proven over the course of his career, it is that he is undoubtedly the greatest 3-point marksman the game of basketball has ever seen. Because of this, a shooting slump from Curry is...
NBA・2 DAYS AGO
fadeawayworld.net

Stephen Curry has changed the game in a spectacular way. When he came into the league, 3-point shooting had importance but it wasn't used like it is now. Today, long-distance shooting is basically a necessity for every player, and guys at every position have learned how to space the floor.
NBA・1 DAY AGO
fadeawayworld.net

When it comes to basketball, Ben Simmons has been dealing with a surplus of issues, most of which are directly related to his messy breakup with the Philadelphia 76ers. After months of trade demands, the team has tried to make him return, and Simmons has sacrificed millions to ensure that doesn't happen.
CELEBRITIES・15 DAYS AGO

Isiah Thomas is one of the most underrated legends that has ever played the game. There's no question that he is extremely overlooked for someone that managed to win two championships and was the face of the "Bad Boy" Pistons. Michael Jordan and Isiah Thomas notably had a rivalry, but...
NBA・2 DAYS AGO
95.7 The Game

The New York Knicks acquired Cam Reddish in a trade with the Atlanta Hawks, and head coach Tom Thibodeau spoke about their new addition.
NBA・2 DAYS AGO

Kevin Durant injured his knee during the game between the New Orleans Pelicans and Brooklyn Nets.
NBA・1 DAY AGO
WFAN Sports Radio

Have any Duke teammates, like Zion Williamson, reached out to RJ Barrett since Cam Reddish trade?

Have any former Duke teammates, like Zion Williamson, reached out to RJ Barrett since news of the Cam Reddish trade broke? “We’ll keep that in house.”
NBA・2 DAYS AGO
fadeawayworld.net

Russell Westbrook Responds After Magic Johnson Criticizes The Lakers: "He's Not Around The Team On A Daily Basis."

As the biggest target for blame by the fans, Russell Westbrook knows the sound of criticism better than most. Since arriving in Laker land, the community hasn't exactly been shy about expressing their disappointment in the status quo and it has left Westbrook in a rather tough position trying to deal with it all.
NBA・1 DAY AGO