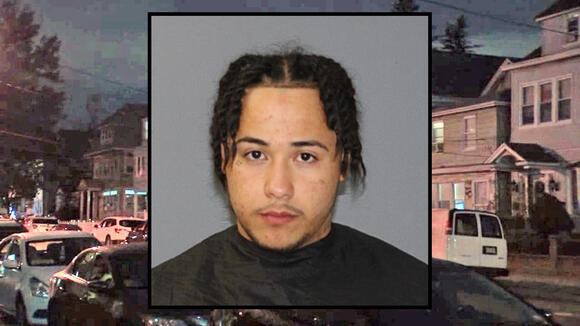 Police in New Jersey identified a suspect in the shootings of five people last month, including a 4-year-old child. Passaic police say that they have identified Ernest Fuentes as one of the gunmen and have issued a warrant for his arrest. It happened on November 21 at 12:55 a.m. during a party in a backyard. Upon arrival, police say they found a 4-year-old, 21-year-old woman, 25-year-old woman, 29-year-old man, and one other adult all suffering from gunshot wounds. The last adult suffered a graze wound and refused treatment The other victims were immediately transported to Saint Joseph's University Medical Center in Paterson where they were treated for their non-life threatening injuries. Police say that two gunman opened fire in the backyard of the home at Lafayette Avenue and Howe Avenue. Passaic police say that if anyone sees Fuentes they are to contact Detective Raymond Rodriguez at 973-365-3939. The public should not try to approach Mr. Fuentes if they see him. The Passaic County Prosecutor's Office also asks anyone with additional information about this incident or the current whereabouts of Fuentes to contact our tips line at 1-877-370-PCPO or the Passaic Police Department at 973-365-3900. ALSO READ | Cops explain how new DNA technology led to arrest in 1999 cold case

he's back in El Salvador seeking asylum from the US for cruelty as he gears for his life... democrats open border policy will get you killed or make you go broke... they do not care....

Wow, you people are so full of hate. Are any of you Christian? Do any of you have an education beyond the second grade? Why are you all so hateful of people? I am going to pray for you all. BTW: I refuse to believe that most of these comments are genuine; you can't possibly be alive and hate the lives of others that much.

Send his dumbass to Iran, Iraq or Afghanistan since the SOB likes shooting folks. Oneway ticket 👍

The 25-year-old gunman wrote his name in the sign-in book before the shooting.
10 HOURS AGO
ABCNY

Detectives believe the victim was shot by a person in the other vehicle, which then fled the scene.
BRONX, NY・5 HOURS AGO
ABCNY

Two juveniles are facing charges for a fire that shut down part of the Garden State Parkway for several hours.
OCEAN COUNTY, NJ・1 HOUR AGO
ABCNY

A college student from the Bronx has been indicted for selling 73 weapons and high-capacity magazines to an undercover NYPD officer.
BRONX, NY・2 HOURS AGO

A mother and her new son reunited Wednesday with a Suffolk County police officer who, with the help of a paramedic, helped deliver and save the baby born on Christmas Eve.
SUFFOLK COUNTY, NY・2 HOURS AGO
ABCNY

A 13-year-old boy was charged with arson, reckless endangerment and criminal mischief for allegedly setting the fire that burned through an East Village card shop earlier this month.
PUBLIC SAFETY・1 DAY AGO
ABCNY

Police in Maplewood and Irvington are investigating a rash of at least nine armed robberies that all occurred on the same day.
MAPLEWOOD, NJ・2 DAYS AGO
ABCNY

Police are searching for an NYU professor who has been missing for several days.
MANHATTAN, NY・41 MINUTES AGO

Police are ramping up their efforts to catch a suspect connected to a shooting that left a baby girl shot in the face in the Bronx last week.
BRONX, NY・1 DAY AGO
ABCNY

Cheng Hsiao and her two children, 3-year-old Ethan and 2-year-old Ian, live in the Towaco section of Montville Township and were reported missing on Sunday.
MORRIS COUNTY, NJ・1 DAY AGO
ABCNY

Hundreds of people came to the 32 Precinct on Wednesday night, packing 135th Street in Harlem and standing in the cold, to share the burden for a moment, of a pain that will last a lifetime.
NEW YORK CITY, NY・13 MINUTES AGO
ABCNY

They worked diligently to inform desperate families of their loved ones' fates, in the hopes that the confirmation of a parent's, sibling's or child's passing can somehow help start the grieving process.
BRONX, NY・4 HOURS AGO
ABCNY

Residents had to be evacuated after a 4-alarm fire broke out at an apartment building in Passaic Wednesday afternoon.
PASSAIC, NJ・15 MINUTES AGO
ABCNY

Officer Sulan, 27, found himself at the scene of another domestic disturbance as an observing officer when his two colleagues were shot.
NEW YORK CITY, NY・2 DAYS AGO