China says 85% of its people will use Mandarin by 2025, in a blow to dialects like Cantonese 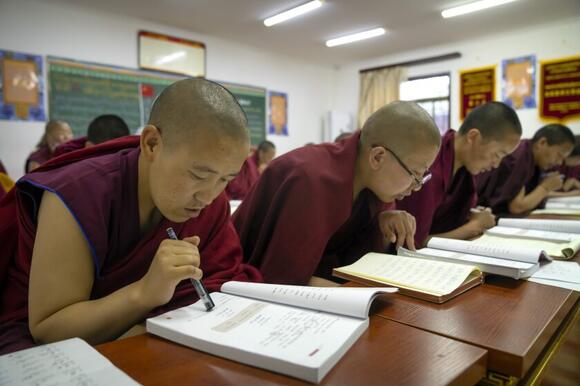 China is launching an aggressive campaign to promote Mandarin, saying that 85% of its citizens will use the national language by 2025.

The move appears to put threatened Chinese regional dialects such as Cantonese and Hokkien under even greater pressure, along with minority languages such as Tibetan, Mongolian and Uyghur.

The order issued Tuesday by the State Council, China’s Cabinet, said use of Mandarin, known in Chinese as “putonghua" or the “common tongue," remains “unbalanced and inadequate” and needs to be improved to meet the demands of the modern economy.

Critics have sporadically protested changes to the education system and employment requirements that have steadily eroded the role of minority languages, calling it a campaign to eradicate cultures that don’t conform to that of the dominant Han ethnic group.

Along with the 2025 goal, the policy aims to make Mandarin virtually universal in China by 2035, including in rural areas and among ethnic minorities.

The promotion of Mandarin over other languages has sparked occasional protests, including last year in the Inner Mongolia region , when the Mongolian language was replaced by Mandarin as the language of instruction.

China's ruling Communist Party has denounced all such movements as a form of separatism and repressed them ruthlessly. It says language conformity is necessary for the sake of the economy and national unity.

The policy is backed up by legal requirements, and the document issued Wednesday demanded strengthened supervision to “ensure that the national common spoken and written language is used as the official language of government agencies and used as the basic language of schools, news and publications, radio, film and television, public services and other fields."

It also calls on officials to “vigorously enhance the international status and influence of Chinese" in academia, international organizations and at global gatherings.

Government attempts to promote Mandarin through its worldwide network of Confucius Institutes have been controversial, with critics denouncing them as an attempt to promote the party's agenda and quash discussion of such topics as its human rights record.

With All Eyes on Russia, China Warns U.S. of Full Blown Military Conflict Over Taiwan

"The Taiwan issue is the biggest tinderbox between China and the United States," said Qin Gang, China's ambassador to the U.S.
FOREIGN POLICY・18 HOURS AGO
Newsweek

China's Foreign Minister Wang Yi pulled no punches when he spoke with Secretary of State Antony Blinken on Thursday.
FOREIGN POLICY・2 DAYS AGO
The Independent

China blasts US over reports of withdrawing diplomatic staff

China on Wednesday expressed “serious concerns and dissatisfaction” with the United States over reports of an internal State Department request to allow the departure of diplomats and their families from China amid tightening anti-pandemic measures. Foreign Ministry spokesperson Zhao Lijian said China’s anti-virus regulations were in line with international treaties governing the treatment of diplomatic personnel and that the nation was “undoubtedly the safest country in the world at the moment.” China has pursued a strict “zero tolerance” policy toward outbreaks, including lockdowns of millions of people, travel bans, compulsory masking, mass testing and health surveillance by smartphone apps....
FOREIGN POLICY・2 DAYS AGO
Telegraph

Chinese president Xi Jinping has said climate policies must not impact “normal people”, as he sought to reassure the public over the cost of its net zero drive. In a speech to Communist leaders, Mr Xi signalled that China would prioritise jobs over the environment in the near-term, amid growing anxiety over an economic slowdown.
CHINA・2 DAYS AGO

Space tugs are designed for the peaceful extraction of defunct satellites, but if they're programmed to do so, they could deorbit another space agency's active satellite. A Chinese space tug satellite, Shijian-21 (SJ-21), grabbed onto one of the country's other satellites and pulled it out of its orbit into a "super-graveyard drift orbit", a report from The Drive reveals. The new development has drawn concern from U.S. officials, who say the technology could be used to compromise other countries' satellite operations.
AEROSPACE & DEFENSE・22 HOURS AGO
naturalgasworld.com

Shell says China needs to up its climate game: press

Global major Shell says China needs to take quick action to reach carbon neutrality, and is recommending it increase power generation by 60%, the Reuters news agency reported January 17. China has declared plans to reach peak emissions by 2030, but has not yet revealed a 2060 carbon road map,...
ENERGY INDUSTRY・12 DAYS AGO
Silicon Republic

Russia considers China-like ban on crypto mining and use

Following concerns around market bubbles and energy usage, Russia’s central bank has proposed a crackdown on cryptocurrencies. Russia may ban crypto mining and investment amid fears that it could compromise financial stability in the country. In a report published yesterday (20 January) and seen by Reuters, Russia’s central bank...
MARKETS・7 DAYS AGO
NBC Miami

Supply chain disruptions are being prolonged driven largely by China's strict zero-Covid policy, according to an economist from Moody's Analytics. China's zero-Covid policy "really does increase the downside risks for material improvement in supply chains," said Katrina Ell, a senior economist for Asia-Pacific. She noted there will be "important ramifications...
BUSINESS・12 DAYS AGO

NYT: China Really Screwed Itself By Protecting Its People From Dying Of COVID

And if millions need care—even if they don’t need to be hospitalized—the hospitals will rapidly be overwhelmed. That is from an op-ed this morning in The New York Times, by doctors Ezekiel J. Emanuel and Michael T. Osterholm, warning that China’s fabulously successful measures for limiting COVID-19 infections and deaths—”Even with about four times the population of the United States, China has had fewer than 140,000 confirmed Covid cases and fewer than 6,000 deaths since January 2020,” the doctors write—have actually been a grave mistake, as preventing the disease from running rampant through the nation’s populace has left China woefully vulnerable to the next pandemic.
PUBLIC HEALTH・3 DAYS AGO
NBC Philadelphia

The International Monetary Fund's managing director said Friday that China's zero-Covid policy is increasingly looking like a "burden." Speaking to CNBC at The Davos Agenda, Kristalina Georgieva said the containment strategy, though initially successful, was now presenting more risks than benefits. Georgieva noted that further measures could be expected as...
BUSINESS・7 DAYS AGO
yicaiglobal.com

(Yicai Global) Jan. 14 -- With the economy recovering steadily, China’s local fiscal revenue was probably better last year than in 2020, when the Covid-19 pandemic hit hard, according to a report by a Beijing-based think tank. The 2021 China Local Fiscal Development Index Report by Renmin University of...
ECONOMY・15 DAYS AGO
kfgo.com

SINGAPORE (Reuters) – China may triple electricity generation to supply 60% of the country’s total energy under Beijing’s carbon-neutral goal by 2060, up from the current 23%, Royal Dutch Shell said on Monday. Shell is one of the largest global investors in China’s energy sector, with business...
ENERGY INDUSTRY・11 DAYS AGO
teslarati.com

With boost from cars like Tesla Model 3 and Model Y, China is well ahead of its 2025 EV target

Thanks in no small part to the runaway success of vehicles like the Tesla Model 3, Model Y, and other notable electric cars from ventures like SAIC-GM-Wuling, China’s EVs are on track to reach the country’s 20% nationwide penetration goal this 2022. This is very impressive, as it is well ahead of the government’s forecast, which estimated that the 20% mark would be attained around 2025.
ECONOMY・11 DAYS AGO
Axios

Taiwan's defense force said 39 Chinese warplanes flew into its Air Defense Identification Zone (ADIZ) on Sunday. Why it matters: The largest Chinese air force incursion into the zone since October came a day after the U.S. and Japanese navies conducted a joint exercise in the Philippine Sea. While China's...
AEROSPACE & DEFENSE・5 DAYS AGO
Newsweek

China Would Not Like Russia-Ukraine War During Olympics, Wendy Sherman Says

U.S. Deputy Secretary of State said NATO's proposed sanctions against Russia send a message: "If you take this action, there will be a severe reaction."
SPORTS・1 DAY AGO
Time Out Global

Cantonese internet and texting slang to use right now

Trends on the internet are constantly changing and every year we have new buzzwords and slang to get to grips with. The same goes for Cantonese in Hong Kong. So, if you don’t want to be the only one in your work WhatsApp group that doesn’t get it, it’s time to learn new words and put this slang in your dictionary.
CHINA・11 DAYS AGO
Newsweek

Never miss a story: Follow your favorite topics and authors to get a personalized email with the journalism that matters most to you. When news broke that an unvaccinated pregnant woman in Israel tested positive for both the coronavirus and the common flu at the same time earlier this week, it sent shock waves through the medical community and introduced a new term into the COVID-19 lexicon: “Flurona.”
LOS ANGELES, CA・22 DAYS AGO
americanmilitarynews.com

This article was originally published by Radio Free Europe/Radio Liberty and is reprinted with permission. U.S. Secretary of State Antony Blinken said the United States has raised an illness with Russia that has afflicted American diplomats as it works to find out what the ailment is and what causes it.
U.S. POLITICS・12 DAYS AGO