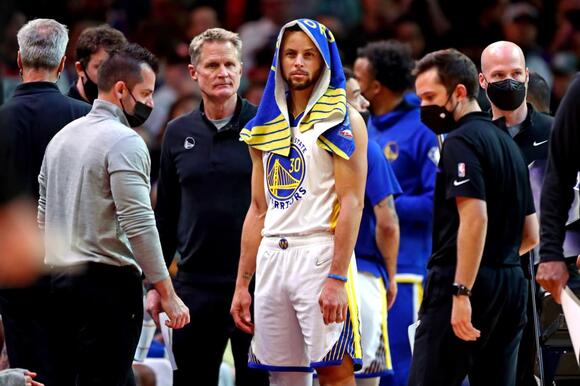 The Phoenix Suns defeated the Golden State Warriors on Tuesday night in Arizona.

The Golden State Warriors were in Arizona to take on the Phoenix Suns on Tuesday evening.

The matchup was a very highly anticipated one, because these are the two best teams in the NBA.

Before the game, the Warriors shared a video of some of the players walking into the arena.

One of the players in the video was Steph Curry, who was walking into the arena with his pre-game outfit on, and the video can be seen in a tweet that is embedded below from the Twitter account of the Warriors.

Curry had a rough night finishing the game with 12 points, three rebounds and two assists, while shooting 4/21 from the field.

The Golden State Warriors are hosting the Detroit Pistons on Tuesday evening, and the Warriors shared an awesome photo of Klay Thompson and Steph Curry.
NBA・2 DAYS AGO
FastBreak on FanNation

Steph Curry and the Golden State Warriors are playing the Detroit Pistons on Tuesday night.
NBA・2 DAYS AGO
95.7 The Game

Devin Booker, Chris Paul and the Phoenix Suns are in Dallas to play the Mavericks.
NBA・1 DAY AGO

NBA power rankings: Now that the NBA season is in full swing, it’s time to rank all 30 teams. With
NBA・2 DAYS AGO
watchstadium.com

Steph Curry on the NBA’s Evolution

Steph Curry recently opened up about his role in the NBA with Shams Charania. The crew discusses his comments.
NBA・11 HOURS AGO
FastBreak on FanNation

Steph Curry of the Golden State Warriors tweeted out a video on Wednesday.
NBA・1 DAY AGO
Sportsnaut

The Phoenix Suns look to complete a perfect five-game road trip when they visit the Dallas Mavericks on Thursday night.
NBA・1 DAY AGO

LYNCHBURG, Va. (WSET) — When is a 27-point effort in a blowout win just another ho-hum night at the office?. Ask Liberty's Darius McGhee. The Senior continues to dazzle and amaze the college basketball world with his play. As of January 18th, McGhee is fourth in the nation with 23.0 points a game, and leads the nation with 437 points. That includes 79-three point shots, also first in the nation.
NBA・2 DAYS AGO
Sports Illustrated

First-place Phoenix travels to take on a surging Dallas team and Indiana draws Golden State on the second night of a back-to-back.
NBA・1 DAY AGO
Yardbarker

Being one of the best to play the game doesn't come without a little smack talk from disbelievers. If anybody knows that all too well, it's Steph Curry. The Golden State Warriors superstar addressed that very thing in an interview this week with The Athletic's Shams Charania. Despite shattering the...
NBA・2 DAYS AGO
ClutchPoints

Klay Thompson hasn’t exactly been lighting it up for the Golden State Warriors since he made his highly-anticipated return to action in mid-January. Especially considering how Thompson was shooting the ball prior to his two-year injury hiatus, it would be safe to say that the five-time All-Star is currently in the midst of a brutal shooting slump.
NBA・1 HOUR AGO

Warriors coach Steve Kerr took the blame for his team’s 121-117 overtime loss to the Indiana Pacers, who were without four of their top five scorers.
NBA・7 HOURS AGO
Vacaville Reporter

SAN FRANCISCO — In case there was any doubt, Steph Curry and Klay Thompson quickly quieted whatever concerns existed following a 1-3 road trip and a stretch of subpar play that dated back even further. Yes, the Splash Brothers are back. Curry and Thompson had shared the court three...
NBA・2 DAYS AGO
FastBreak on FanNation

Kevin Love sent out a tweet about the Phoenix Suns who defeated the Dallas Mavericks on Thursday.
NBA・22 HOURS AGO
NBC Bay Area

Curry's response to fans who claim he 'ruined the game' originally appeared on NBC Sports Bayarea. Steph Curry is the greatest shooter in the history of the NBA and still, some fans will find a reason to diminish what he has done for the game of basketball. The Warriors' superstar...
NBA・2 DAYS AGO

Warriors’ Stephen Curry sounds off on Jordan Poole after brutal display vs. Pacers

The Golden State Warriors succumbed to an upset of epic proportions against the Indiana Pacers on Thursday night. The Dubs fell 121-117 to a lowly Pacers squad that was missing arguably their six best players not named Chris Duarte for the contest. Stephen Curry didn’t have much help in this...
NBA・12 HOURS AGO
IndyStar | The Indianapolis Star

SAN FRANCISCO — The Pacers weren't supposed to be in the game, and fittingly, a lot of them weren't. Indiana was without all five of its projected starters for the 2021-22 season when it faced Golden State on the second night of a back-to-back Thursday. The absence of two-time All-Star Domantas Sabonis (left ankle sprain), league-leading shot blocker Myles Turner (stress reaction in left foot), point guard Malcolm Brogdon (sore right Achilles), shooting guard Caris LeVert (sore right calf) and swingman T.J....
NBA・15 HOURS AGO
FastBreak on FanNation

Steph Curry will play in the game on Friday night between the Houston Rockets and Golden State Warriors.
NBA・3 HOURS AGO
FastBreak on FanNation

The Phoenix Suns are in Dallas to play the Mavericks on Thursday night.
NBA・1 DAY AGO