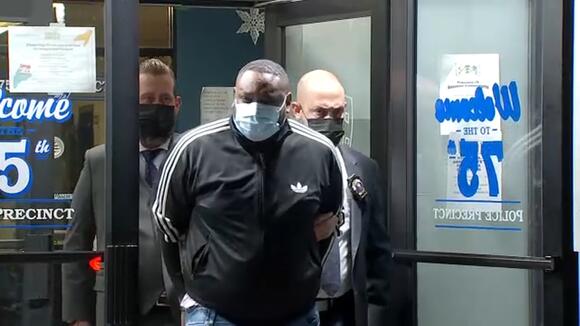 Police arrested a man accused of trying to lure a young girl into his car in Brooklyn. Verlon Thomas, 36, is accused of ordering the girl to get into his car Monday afternoon. It happened at the corner of Essex Street and Dumont Avenue in East New York as the victim was walking home from school around 2:30 p.m. As he told the girl to "get into my car," authorities say he was seen touching himself. Police say the young girl was able to get away. Investigators tracked Tomas down at his home after surveillance video captured the license plate on his vehicle. Thomas is now charged with luring a child. ALSO READ | Cops explain how new DNA technology led to arrest in 1999 cold case

They need to do a real investigation on that man because I'm sure that's not the first time he attempted this. Life is good The L

Police say the driver was parked in the Westchester Square section when someone walked up to his vehicle and shot him in the leg.
5 HOURS AGO
ABCNY

Taylor Swift, a multiple Grammy winner with a fervent fan base, has been plagued by stalkers at her Tribeca home as well as homes she owns in California and Rhode Island.
NEW YORK CITY, NY・9 HOURS AGO

Rawleigh Thompson was heading to church on Sunday when a man pushed him from behind onto the subway tracks at the Fulton Street Station, directly in front of an oncoming train.
NEW YORK CITY, NY・12 HOURS AGO
ABCNY

The 25-year-old gunman wrote his name in the sign-in book before the shooting.
BRONX, NY・2 DAYS AGO

NYU professor Suryanarayan Hegde, who had been missing for several days, has been found safe at Harlem Hospital, officials announced Thursday.
PUBLIC SAFETY・1 DAY AGO
ABCNY

Three teenagers are now facing murder charges in New Jersey for the death of 18-year-old Robert Cuadra, an honor student who was just months away from attending his dream university on a full scholarship.
PATERSON, NJ・8 HOURS AGO
ABCNY

A 35-year-old man was shot in the arm in the waiting room at Jacobi Hospital in the Bronx Tuesday.
NEW YORK CITY, NY・3 DAYS AGO