England allrounder Stokes 'fit and hungry' ahead of Ashes 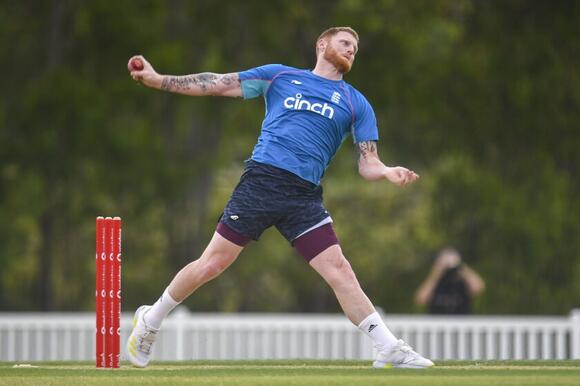 England allrounder Ben Stokes has declared himself “fit and hungry” to start the Ashes series against Australia.

Stokes was a late addition to the squad , having taken a break from cricket to mentally refresh and undergo a second operation on his fractured left index finger.

England captain Joe Root has been intent on not rushing Stokes back into the team but the allrounder looks to be ready to play in the first test, which starts in Brisbane on Dec. 8.

“2 months ago, I couldn’t hold a bat,” Stokes wrote in an Instagram post on Wednesday. “With 1 week to go till the first test, I’m fit and hungry for the big series down under.”

Stokes was in the first group of England cricketers who arrived in Brisbane on Nov. 6 ahead of the Ashes.

The England and Wales Cricket Board has said it will investigate after police were called to break up a drinking session marking the end of the Ashes series.Players and staff from both teams enjoyed a get together in the aftermath of Australia’s 4-0 series win in Hobart late on Sunday night, standard practice at the conclusion of a tour, but their socialising proved too rowdy for a fellow guest at the Crowne Plaza Hotel.Tasmania Police were called and sent four officers to bring an end to the boozy gathering, which had spilled out on to an open air terrace.A video...
SPORTS・1 DAY AGO
The Independent

England head coach Chris Silverwood does not know for certain if he will survive this winter’s Ashes thrashing but is keen to ensure there is no repeat performance in four years’ time.Silverwood is under no illusion about how precarious his position is after the tourists crashed to a 4-0 series defeat with an embarrassing collapse in Hobart.The appetite for change is mounting around England’s Test side after a dismally uncompetitive tour but the targets are so diverse it is not yet clear where the mud will stick.Silverwood’s position is among those under intense scrutiny, but Joe Root’s captaincy, Ashley Giles’...
SPORTS・2 DAYS AGO
newschain

England head coach Lisa Keightley admits the squad are still “a bit rusty” three days before the start of their Women’s Ashes series against Australia in Adelaide. The multi-format series was brought forward by a week and will start with three T20 matches at the Adelaide Oval, commencing on January 20.
SPORTS・2 DAYS AGO
The Independent

Sports stars and clubs across the world continue to provide an insight into their lives on social media.Here, the PA news agency looks at some of the best examples from January 17.CricketAustralia and the Barmy Army bonded over Sweet Caroline View this post on Instagram A post shared by Steve Smith (@steve_smith49)Sophie Ecclestone’s Ashes preparations are going well!7️⃣-1️⃣4️⃣ 🔥 @Sophecc19 was in fine form with the ball in yesterday's intra-squad game! pic.twitter.com/w2AvZpHUZZ— England Cricket (@englandcricket) January 17, 2022All seven of @Sophecc19's...
TENNIS・2 DAYS AGO

What next for England after Ashes embarrassment?

England’s woeful Ashes campaign came to a humiliating conclusion as the latest in a long line of batting collapses condemned them to a crushing defeat in Hobart.After losing the series 4-0 and barely competing along the way, the post mortem is only just beginning. Here the PA news agency looks at what went wrong and what can be done about it.Just how bad was this series?In terms of overall scoreline, a slim improvement on the 5-0 whitewashes suffered in 2006-07 and 2013-14 but anyone who stuck with those chastening campaigns all the way through will know they were more competitive...
SPORTS・2 DAYS AGO
San Diego Union-Tribune

Owen Farrell faces a race against time to prove his fitness for England’s opening Guinness Six Nations match against Scotland.Farrell had been expected to make his comeback after two months out with an ankle injury in Saracens’ Challenge Cup clash with London Irish on Sunday, but he only resumed team training this week.How do you rate this year's @EnglandRugby squad? 🌹#GuinnessSixNations pic.twitter.com/sarffQcodm— Guinness Six Nations (@SixNationsRugby) January 18, 2022The 30-year-old has been retained as England captain with head coach Eddie Jones hoping he will lead the team out at Murrayfield on February 5, but there is still the possibility that...
WORLD・9 HOURS AGO
The Independent

It was undoubtedly rancid and yet, at the same time, appropriate. The last 10 wickets lost for 56 runs. The only anomaly that it started with an opening stand of 68: England’s largest of this Ashes series and yet knowingly insignificant. Finally, the opening batters had given Australia something to worry about. Of course, it was for nothing. It might be worth starting there, and that opening stand. That incorrigible combination England have struggled with for the last four years and “finally” cracked. Even then, on a whim, with Rory Burns recalled after he was dropped for the third...
SPORTS・2 DAYS AGO

All-rounder Nat Sciver says England are feeling “a bit more calm” now after initial frustrations with the strict coronavirus protocols in place upon their arrival in Australia ahead of the Women’s Ashes.The squad were greeted with stringent conditions when they touched down in Canberra with players not allowed to meet in groups or go to restaurants, even outdoors.“It’s been a bit tricky in terms of Covid rules and things like that and just making them fit for our group and keeping our mental wellbeing at the forefront as well as cricket,” Sciver said.“But I think now, after the meetings...
WORLD・1 DAY AGO
The Independent

Jason Roy marked his return to England duty with a scintillating 36-ball hundred to usher his side to a thumping win in their only warm-up before a five-match Twenty20 series against the West Indies In his first outing since recovering from the torn left calf that curtailed his T20 World Cup two months ago, the opener struck nine fours and 10 sixes against a Barbados Cricket Association President’s XI at the Kensington Oval.Roy dominated a 141-run opening stand alongside Tom Banton before he was out for 115 off 47 balls, an innings which formed the backbone of England’s 231 for...
SPORTS・1 HOUR AGO
The Guardian

Owen Farrell has been backed by Eddie Jones to make a successful comeback from ankle surgery in time to lead England into the Six Nations.Farrell has been retained as captain despite being sidelined since limping off against Australia last autumn with Saracens’ Challenge Cup clash with London Irish on Sunday earmarked for his comeback.Testament to Jones’ loyalty to the 30-year-old playmaker is that he will be given every opportunity to prove his fitness for the opener against Scotland at Murrayfield on February 5.In contrast, Sam Underhill and Elliot Daly have been left out of the 36-man training squad due to...
WORLD・1 DAY AGO

Yorkshire have appointed Ottis Gibson as their new head coach on a three-year deal.The club announced that the 52-year-old, who has previously been head coach for the West Indies and South Africa as well as working as a bowling coach for England, is the latest new addition to a much-changed backroom staff at Headingley.He will officially start work at the end of February, after his involvement with Pakistan Super League side the Multan Sultans comes to an end.Last month Yorkshire announced the departures of 16 members of staff, including the entire coaching team.This included director of cricket Martyn Moxon and...
SPORTS・14 HOURS AGO
The Guardian

Excuses can be made for England’s Ashes shambles, but the status quo cannot hold | Ali Martin

The pandemic, a lack of preparation and a fine Australia team are all fair mitigation yet England’s muddled selections, fitness issues and abject batting suggest a deeper malaise
SPORTS・2 DAYS AGO
The Independent

Gregor Townsend feels the array of on-form talent he has had to select from gives him confidence that Scotland can challenge for the upcoming Six Nations title.The head coach named a 39-man squad on Tuesday, with Fraser Brown, Oli Kebble, Adam Hastings Huw Jones, Sean Maitland and George Horne among a batch of notable omissions.The strength in depth the Scots have at present gives Townsend grounds for optimism that they are equipped to win the tournament for the first time since their Five Nations triumph in 1999.He said: “In terms of where we are, we believe we have a...
RUGBY・7 HOURS AGO
The Independent

Eddie Jones could be forced to leave out unvaccinated players during the 2022 Six Nations with England set to visit both Italy and France.Both countries require those attending sport stadiums to prove their vaccination status, with French government sources confirming to AFP on Monday that this would extend to players.That could leave Jones without any players who are not fully vaccinated for England’s Round Two trip to Rome on 13 February and the potential crucial final clash with France on “Super Saturday’, 19 March.Jones named a 36-player squad for a pre-Six Nations training camp on Tuesday, and it is...
WORLD・1 DAY AGO

Sports stars and clubs across the world continue to provide an insight into their lives on social media.Here, the PA news agency looks at some of the best examples from January 19.TennisAndy Murray served Naomi Osaka a compliment. And she returned it.Anyone put their heart on their sleeve and fight harder than @andy_murray ? 🥺🙏🏾🔥 https://t.co/c6G2SA2Ycx— NaomiOsaka大坂なおみ (@naomiosaka) January 19, 2022Osaka was feeling arty.Lol omg 😂💀 https://t.co/SeYxBn0avu— NaomiOsaka大坂なおみ (@naomiosaka) January 19, 2022Serena had a battle on her hands.[xdelx]Denis Shapovalov struggled with a banana!Sometimes the struggle is real 😅 Sorry, @denis_shapo 🍌#AusOpen • #AO2022• #AOTennis pic.twitter.com/NYtCJkQYss— #AusOpen (@AustralianOpen) January 19, 2022Madison...
TENNIS・4 HOURS AGO
The Independent

Owen Farrell has been named as England captain for the 2022 Six Nations with a 36-player group selected by Eddie Jones ahead of the tournament.The squad will assemble in Brighton on Monday 24 January for a five-day training camp ahead of the tournament. England open their campaign against Scotland at Murrayfield on 5 February. George Ford is again left out, with Marcus Smith and Farrell preferred at fly-half alongside uncapped Bath youngster Orlando Bailey, who earns a first call-up. Farrell has not played since suffering an ankle injury during the autumn but is expected to be fit for the start...
WORLD・1 DAY AGO
The Independent

Brighton boss Graham Potter insists he is very happy at one of the Premier League’s “best-run clubs” amid reports linking him with the vacant Everton job.The Toffees are searching for a new manager after sacking Rafael Benitez following just one win from 13 top-flight games.Potter, whose contract runs until the summer of 2025, has impressed since arriving at the Amex Stadium in 2019 and has the Seagulls flying high in ninth place ahead of Tuesday’s visit of Chelsea.“I can’t comment on speculation, things that are out there in the newspapers,” he said.“I’m focused on my job here, very happy here...
PREMIER LEAGUE・2 DAYS AGO