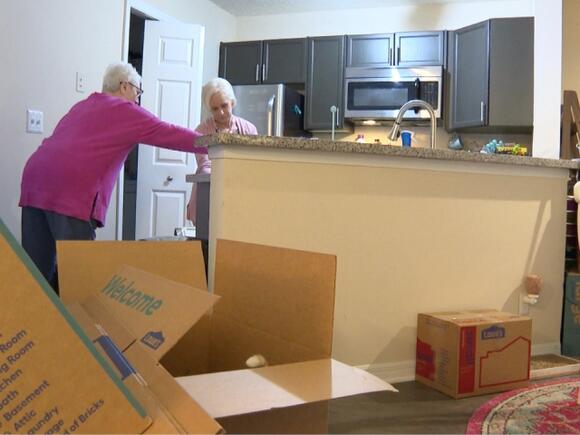 Residential evictions continue to increase in Tampa Bay, but some of these evictions are happening while residents are waiting for emergency rental assistance from programs like OUR Florida.

“She's waiting for the door to knock, she thinks the doors knocking because there's a sheriff coming to kick us out,” Pasko said.

“The anxiety is killing me,” Balcom added. She showed us the box of medicine she now keeps next to her bed, “Just in case we have to go,” she said.

When the COVID-19 delta variant surged this summer, Pasko said patients stopped coming into the office and her hours were cut. She started making and selling jewelry, but it wasn’t enough.

Looking at the bills, she knew the September rent was going to be hard, so she applied for emergency rental assistance with both Pinellas County and the state's Department Of Children and Families OUR Florida. She didn’t realize you could only apply to one.

Even though the online portal said her application had been approved, she had to ask family to help pay September’s rent.

On October 3, she got her first eviction notice.

That’s when she turned to the Community Law Program, a nonprofit working with tenants and landlords in Pinellas County. Attorney Mercy Roberg was able to stop Pasko’s eviction in court.

“ We were able to actually get a screenshot that the check had been paid. And this came through a contact that I actually had in Pinellas County who was able to sort of elevate it,” Roberg said.

Roberg said the date on the screenshot showed a check sent on October 11, but by the end of November, the check had still not arrived.

“ It’s been over a month and a half and every time I reach out to OUR Florida and the client reaches out to find out, you know, can we get a check number? Can we find out if it was cashed? Can it be re-issued? These are all questions we've asked, we get the runaround,” Roberg explained.

The day before Thanksgiving, Pasko reached someone at DCF on the phone who told her the check was now voided and another check would be sent.

When she looks at her portal now, it says, “The assistance will be provided directly to your landlord. Please allow up to two weeks for this payment to be processed." She read that to ABC Action News on November 23.

Roberg says 90% of her clients are back to work, but just can’t catch up with the rising cost of living in Pinellas County.

She currently has 15 clients waiting on thousands of dollars from OUR Florida.

“ My team tries to reach out to representatives at OUR Florida, we do not get any email responses,” Roberg exclaimed, “We have sent clients to the in-person offices that are allegedly available for in-person assistance, and our clients tell us that they get sent from the Largo office to the Tampa office or the Tampa office, they're told to call to you know, the online help number. So it's sort of just a circle that our clients keep going in.”

ABC Action News has been emailing the DCF communications office since asking for updated numbers on OUR Florida funding since November 1.

On the 1, 2, and 11, the deputy communications director responded that they were working on it.

On the 29, we asked again, specifically asking about Pasko's situation and Roberg's concerns. The deputy director responded, “Working on this, and will get back to you when I have answers.”

Unfortunately for Pasko, the funds may be too late. She received her second eviction notice the week of Thanksgiving.

The ABC Action News I-Team did a story on OUR Florida back in August, finding only 3% of their rental assistance funds had gone out to residents .

The agency told us in an email: "DCF received $871 million as part of the ERA program to administer statewide. OUR Florida has paid out $23.2 million to 5,403 households.”

The Community Law Program is asking for better communication, at the least.

“ If OUR Florida could connect with us with legal aid, with the communities to say here's the person to call, here are the five people that will answer your questions. Here's the person that will send you a screenshot with the check number and the date it was dispersed… that would be my ask,” Roberg said.

If you live in Pinellas County and need help with a possible eviction, click here to connect with the Community Law Program .

If you live in other parts of Tampa Bay, click here to connect with Bay Area Legal Services .

Some of these comments show little to no compassion. If a person is really trying everything they think of including working for some they may still need help. I am an Army veteran and believe it or not we had active duty personal needing assistance to make it. AER (Army Emergency Relief) and no some could not just go out and get another job to supplement their income due to deployment and other things. So don't be so judgemental. Yes there are able body people that can work but refuse to do so. That's not everyone!!

OMG the same thing is happening to me and my boyfriend. Any day now we are going to get booted out. He tried OUR Florida first, but got no where. So he went through Pasco County HEART. That was back in September, landlord still hasn't received the check. Evey time he calls HEART he gets the same ole thing....THE CHECK HAS BEEN PROCESSED, and to keep checking your email for confirmation that it's been sent. We are in the same dilemma as the person in this article.

Florida citrus advocate says industry is 'at a crossroads'

The Tampa Hillsborough Homeless Initiative needs more landlords to step up and help get people off the streets.
TAMPA, FL・1 DAY AGO
ABC Action News WFTS

Tampa Police say two people are recovering in the hospital after they were found shot on the sidewalk outside of Club Eden early on Monday morning.
TAMPA, FL・23 HOURS AGO

The search is on for the next superintendent that will lead one of the largest school districts in Florida. Some community leaders tell ABC Action News they’re making a big push for the next leader to come from a diverse background.
PINELLAS COUNTY, FL・12 HOURS AGO
ABC Action News WFTS

Hundreds of children and their families joined in on a big celebration Saturday for this year's Children's Gasparilla parade.
TAMPA, FL・2 DAYS AGO
ABC Action News WFTS

The puppy was brought home all the way from Nebraska!
POLK COUNTY, FL・2 DAYS AGO
ABC Action News WFTS

No discipline for docs questioned over mask opt-out forms

Months after controversy over masks in the classroom prompted state fights, legal battles and even complaints against some doctors over the school mask exemption forms they signed, Investigative Reporter Katie LaGrone discovers the state has yet to discipline a single doctor over questionable forms.
FLORIDA STATE・4 DAYS AGO
ABC Action News WFTS

On New Year's Eve dozens of residents at Holly Court Apartments were served non-renewal and eviction letters, saying they had 30 days to vacate, with no explanation.
TAMPA, FL・4 DAYS AGO
ABC Action News WFTS

During the pandemic, it was really difficult for senior citizens to get out and shop for groceries. So Pinellas County non-profit organization took matters into their own hands and hit the road delivering food to older adults there.
3 DAYS AGO
ABC Action News WFTS

The Federal Bureau of Investigation Denver office issued a statement Friday saying that during their investigation, they did not identify any other individuals "directly involved" in Gabby Petito's death other than Brian Laundrie.
PUBLIC SAFETY・3 DAYS AGO
ABC Action News WFTS

A New Port Richey mom describes her teenager’s recovery from COVID-19 as a miracle. Now, she and her daughter are sharing their story in hopes of inspiring others to take the virus seriously and to thank the healthcare heroes putting their lives on the line every day.
NEW PORT RICHEY, FL・5 DAYS AGO
ABC Action News WFTS

Tampa on the forefront of bone health awareness

Not only are new businesses opening up, but established shops are expanding.
TAMPA, FL・5 DAYS AGO