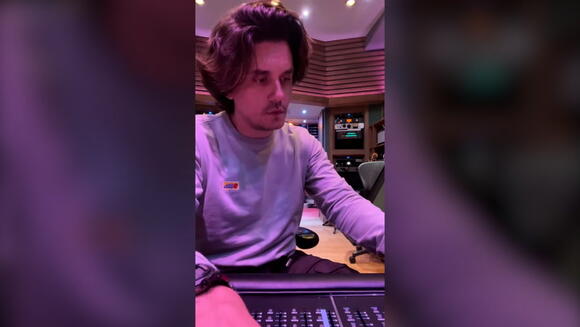 John Mayer has recorded his own version of a viral TikTok song that mocked his music.

The singer responded to the video by social media user Vincent Haney, who has the TikTok username @johnmayerlover3000, in which he parodied Mayer’s music.

Sitting in his car, Haney said: “Dudes who listen to John Mayer be like…” before pressing play on his car radio and singing a Mayer-inspired song.

The lyrics of the parody went: “Hanging out in your house with you, give me another chance to prove, hot dogs are my favourite food.”

On Tuesday (30 November), Mayer, who has 1.4 million followers on TikTok, shared his own response to the video.

He can be sitting in a music studio and playing his own version of Vincent’s song, which includes the additional lyrics: “They really get me in the mood.”

Mayer captioned the video: “Stitch with @johnmayerlover3000 step aside my child.”

Haney commented in response: “NO WAY.”

“Didn’t get it until I watched the original video then I LOST IT,” one fan wrote.

“Obsessed w the fact that you saw this, went to the studio, recorded it, and probably spent a good amount of time mixing it,” another commenter added.

Bob Saget’s Car Picked Up At LAX By John Mayer, Jeff Ross In Video Tribute To Their Fallen Friend

John Mayer and Jeff Ross remembered the late Bob Saget as they performed one final task for their friend – retrieving his car at Los Angeles International airport. The two posted an Instagram video Wednesday of their short road trip, which came three days after Saget’s unexpected death in Orlando at the Ritz-Carlton. He was 65. Saget was remembered as the pickup team tooled down the 405 Freeway on the way to the airport. “You know how effusive you have to be in your love for everyone in your life, for each and every person he loved to be told by another, ‘He...
LOS ANGELES, CA・12 DAYS AGO
Daily Mail

The Weeknd took self-loathing to a whole new level in the music video for his new song Gasoline. The singer-songwriter, 31, released the music video which shows the star as he chases down and then savagely beats up an older version of himself. The beating takes place in a busy...
THEATER & DANCE・14 DAYS AGO
The Hollywood Reporter

John Mayer and Jeff Ross on Wednesday shared a video made while picking up Bob Saget’s car from Los Angeles International Airport. The singer and comic were close pals with the actor, who died unexpectedly Sunday in Orlando. After spending several days with Saget’s family, the two went together to get his car from LAX and made their video while on the road once they had the vehicle. The duo opened by saying how much they deeply loved the Full House star and how they knew he loved them back, as he told them all the time how valued they were to...
LOS ANGELES, CA・12 DAYS AGO
Los Angeles Times

Musician John Mayer and comic Jeff Ross had to get Bob Saget's car back from LAX. So they decided to go live on Instagram and honor the late 'Full House' star.
LOS ANGELES, CA・12 DAYS AGO

Henry Winkler Is Going Viral on TikTok for His Smooth Moves — Watch Below!

While TikTok is great for discovering valuable life hacks or participating in random trends, it's also great for keeping up with our favorite celebrities. No, we don't mean the TikTok stars like Charli D'Amelio or the Hype House; we mean A-list megastars like Lizzo, Elton John, and "The Fonz" himself, Henry Winkler.
BEHIND VIRAL VIDEOS・13 DAYS AGO
ETOnline.com

John Mayer made sure Bob Saget made it home after his death. ET has learned the 44-year-old musician arranged and paid for a private plane to transport the comedian's body home to California after his death in Orlando, Florida, on Jan. 9. Saget was 65 at the time of his death.
ORLANDO, FL・5 DAYS AGO
Newsweek

"No better way to silence the haters than with success!" one user commented on the video.
BEHIND VIRAL VIDEOS・6 DAYS AGO
iheart.com

Gayle on the Inspiration Behind Her Viral TikTok Breakout Song

Gayle’s breakout single “abc…” surged through TikTok, becoming a viral hit. Ryan Seacrest talked to Gayle today about how the song was created and what inspired the catchy angsty anthem. “I was trying to, like, bring positivity to his life and all he ever did was...
BEHIND VIRAL VIDEOS・4 DAYS AGO

Singer John Mayer and comedian Jeff Ross found some comfort in sharing memories of their late friend Bob Saget while retrieving his car from LAX on Wednesday. The duo went live on Mayer’s Instagram page as they drove on the freeway after picking up Saget’s car. The late actor had parked it at the Los Angeles International airport before his flight to Florida as part of his tour.
CELEBRITIES・12 DAYS AGO
The Independent

For as long as she’s been famous, Gwen Stefani has been everything all at once. As the frontwoman of the pop-ska-punk group No Doubt, she was a day-glo Debbie Harry, sporting bindis, adult braces and layers of concert sweat. At gigs, she moved like Iggy Pop, her body as flexible and unpredictable as a spring. Once she went solo, she was a David LaChapelle portrait come to life – a hyper-real yodeller and pop queen who rapped about bananas alongside a troupe of Japanese back-up dancers. Her transformations were seamless, every one of them feeling as natural as slipping on...
MUSIC・1 HOUR AGO
The Independent

Given the current vogue for Nineties nostalgia, it was perhaps inevitable that 2022 would deliver a news story about a Britpop star involved in some needless musical beef. Step forward Damon Albarn, frontman of Blur and Gorillaz, who has whipped the internet into a frenzy by baselessly accusing noted songwriter Taylor Swift of not writing her own songs. I know it’s been a while, but isn’t Albarn supposed to realise when he’s sounding like a charmless man?Swift, understandably, quickly took to Twitter to point out that she very much does write her own songs. “Your hot take is completely false...
MUSIC・1 DAY AGO

This is a trip and a half. There is a long history of animated music videos being edgy and totally ridiculous, and this one joins the ranks as another animated music video you just have to see. An indie Montreal-based animator named Jordan Minkoff has created a video for a song by Yu Su - a Chinese-born, Vancouver-based electronic musician. The downtempo track is called "Melaleuca" and it features some nice vibes. But what is going on in this video…? "So there's a buncha ppl and they go on a plane and then the plane falls in love w/ another plane! In the sky!!! The pilot also ends up with a super bad case of fomo cause he ejected before they arrived at a beach!" The animation style is funky, but it works, making this video unforgettable.
MUSIC・6 DAYS AGO
The Independent

Taylor Swift has hit back at Blur and Gorillaz star Damon Albarn after he claimed that she doesn’t write her own songs.Albarn made the comments in a recent interview while talking about artists relying on “sound and attitude”. When the LA Times interviewer mentioned Swift as an example of someone who doesn’t rely on these things, calling her “an excellent songwriter”, Albarn replied, “She doesn’t write her own songs.” Journalist Mikael Wood replied: “Of course she does. Co-writes some of them.” To which Albarn responded: “That doesn’t count. I know what co-writing is. Co-writing is very different to writing....
CELEBRITIES・1 DAY AGO
hotnewhiphop.com

With a new song and accompanying visuals on queue, it seems like Offset is ready to give the fans more music. The minute long clip previews the Atlanta rapper masked up, talking about what we know to be his favorite topic of discussion: money. There are shots of chains, stacks...
CELEBRITIES・9 HOURS AGO
The Independent

Voices: Sorry, Damon Albarn, but your comments about Taylor Swift sound a lot like sexism to me

In the 1990s, you fell into two main music camps: Blur vs Oasis. I found the Gallaghers too boorish, too much on the mod side of indie. I felt an affinity with Blur frontman Damon Albarn – he’s from my neck of the woods (we both grew up near “Hollow Ponds”, title of the third single on his 2014 solo album Everyday Robots); and Blur always seemed cooler, grittier. Plus, Albarn was hot.But now? The gladiatorial combat of Blur vs Oasis has given way to the far more unlikely Damon Albarn vs Taylor Swift – this time, though, there’s one...
CELEBRITIES・21 HOURS AGO
The US Sun

REMEMBER Galina "Red" Reznikov from Orange Is The New Black? Well the actress behind the Russian inmate now looks completely different. Kate Mulgrew portrayed flame-haired prison masterchef Red in 85 episodes of the hit Netflix series between 2013 and 2019. The 66-year-old recently took to Instagram to treat her 260,000...
CELEBRITIES・5 DAYS AGO
Pride Source

TikTok influencer Rory Teasley was planning to spend the upcoming weekend in Dallas. His flights and an Airbnb were already booked — a much-anticipated trip to celebrate a good friend’s birthday. But the only celebrations happening now are in Teasley’s memory after he was allegedly strangled to death Jan. 6 by his longtime boyfriend, Docquen Jovo Watkins, 31, in a dispute over the video game “Overwatch.”
PONTIAC, MI・5 DAYS AGO
Newsweek

Neil Young, Eric Clapton Stand at Opposite Ends of the Spectrum on COVID Vaccine