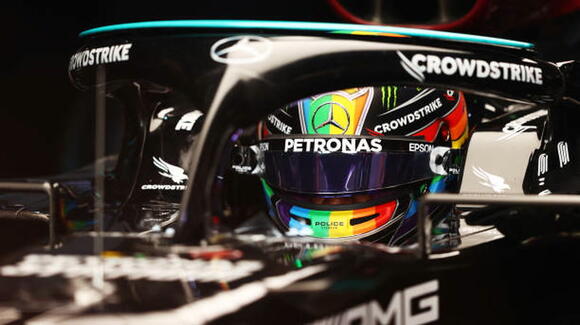 Toto Wolff claims Lewis Hamilton ’s Mercedes is in “the best place it has been all season” as a thrilling Formula One title race heads to Saudi Arabia this weekend.

The high-speed street circuit in Jeddah is expected to favour Hamilton’s machine over the race weekend with Wolff bullish about where the team are at in their preparations.

“The car has been performing well recently and is probably in the best place it has been all season, with the drivers confident to push it to the limit. That’s encouraging for the final races and gives us strong momentum to take forward,” he said.

“We are all excited to still be in the fight at this stage in the season, it’s a privilege and a testament to our resilience when we see where we stood in the early summer. Both titles are wide open, and our mission is clear.”

The stop in the Gulf state is a first for the sport with a raft of unknowns to navigate yet another wrinkle in the title chase.

“Jeddah is another completely new challenge, an all-new track to get to grips with and a lot of work has gone on behind the scenes to ensure we hit the ground running on Friday, because getting as much information as we can during those initial sessions will be vital,” he added.

“It's a fast street circuit with long flat-out sections and several high-speed corners, lined by barriers meaning it’ll be high risk and reward.

“We’re more motivated than ever and we expect to be in the hunt, so we are all looking forward to the debut Grand Prix in Saudi Arabia.”

Formula 1: It’s time for Lewis Hamilton, Mercedes to shut up and race

Mercedes and seven-time Formula 1 world champion Lewis Hamilton have been in a snit since the 2021 season ended, but it’s time for them to focus on 2022. Since the heartbreaking and dramatic end to his 2021 Formula 1 season, Lewis Hamilton has made just one public appearance, and that was to be knighted. Even a Formula 1 legend has to show up when the crown comes calling.
MOTORSPORTS・2 DAYS AGO
firstsportz.com

Mercedes Team Principal Toto Wolff has recently emphasized the characteristic that according to him separates Lewis Hamilton and Max Verstappen. Lewis lost out on his record eighth world title during the Abu Dhabi Grand Prix of the 2021 Formula1 season. It has been stated in automotorsport that Toto Wolff during...
MOTORSPORTS・2 DAYS AGO
firstsportz.com

Other than the dramatic and intense title dual between Mercedes Lewis Hamilton and 2021 world champion Max Verstappen, the dominance in car performance Mercedes and Red Bull cars had over their rival teams stood out the most. The top 3 finishers in constructers championship, Mercedes at P1, Red Bull at P2 and Ferrari at P3, showed how having big financial backing is important to peruse championship in F1.
MOTORSPORTS・1 DAY AGO
firstsportz.com

Jacques Villeneuve the former MotoGP rider and 1997 world champion has recently given his view on the whole Lewis Hamilton retirement saga. It has been stated in Speedweek that Jacques Villeneuve has recently during an interview stressed the key factor that according to him could help Lewis Hamilton in making a final decision regarding his retirement.
MOTORSPORTS・6 HOURS AGO
firstsportz.com

Lewis Hamilton, the former 7-time world champion has been the hot topic ever since the Abu Dhabi Grand Prix, and former MotoGP racer Jacques Villeneuve has recently come up with an interesting theory regarding Lewis Hamilton’s future plans. It has been stated in planetf1 that as per Jaques Villeneuve,...
MOTORSPORTS・2 HOURS AGO
SkySports

George Russell is relishing his big Formula 1 chance this season and Lewis Hamilton will have his hands full battling his young Mercedes team-mate for the title, believe the Sky Sports F1 pundits. In a partnership that pitches a rising F1 superstar against the sport's most successful and famous driver,...
MOTORSPORTS・1 DAY AGO
The Independent

Sports stars and clubs across the world continue to provide an insight into their lives on social media.Here, the PA news agency looks at some of the best examples from January 19.TennisAndy Murray served Naomi Osaka a compliment. And she returned it.Anyone put their heart on their sleeve and fight harder than @andy_murray ? 🥺🙏🏾🔥 https://t.co/c6G2SA2Ycx— NaomiOsaka大坂なおみ (@naomiosaka) January 19, 2022Osaka was feeling arty.Lol omg 😂💀 https://t.co/SeYxBn0avu— NaomiOsaka大坂なおみ (@naomiosaka) January 19, 2022Serena had a battle on her hands.[xdelx]Denis Shapovalov struggled with a banana!Sometimes the struggle is real 😅 Sorry, @denis_shapo 🍌#AusOpen • #AO2022• #AOTennis pic.twitter.com/NYtCJkQYss— #AusOpen (@AustralianOpen) January 19, 2022Madison...
TENNIS・2 DAYS AGO

For Naomi Osaka, defeat in the Australian Open third round was a sign of progress rather than crisis. Osaka returned to Melbourne as the defending champion and ignored the tumult she has endured over the past year, and if her main priority now is just to recapture a simpler joy of playing tennis, it frequently shone through in a match that delivered relentless fireworks against Amanda Anisimova. It was a breathtaking 135-minute contest that demanded the biggest spotlight in Melbourne Park, even if it had not been selected for the main stage. A battle of power and supreme ball-striking,...
TENNIS・23 HOURS AGO
The Independent

Former Formula One team boss Eddie Jordan has pulled out of the multibillion-pound race to buy software company Playtech, reportedly worried that his bid would be scuppered by a group of investors.JKO Play, a company set up by Mr Jordan to buy London-listed Playtech, confirmed reports that it was backing out of the race.On Thursday the Financial Times reported that JKO was worried that a group of Asian investors who have built up a 27% shareholding in Playtech could block its bid.JKO had made an attempt to muscle into a deal which had already been agreed between Playtech and an...
MOTORSPORTS・1 DAY AGO
The Independent

The competition in Formula 1 will be closer with multiple cars expected to be in the mix in 2022, according to an FIA chief.Regulation changes have been introduced for the upcoming season to improve the aerodynamics of the car and teams like Alfa Romeo and Haas could capitilise. Head of Single Seater Technical Matters at the FIA, Nikolas Tombazis, says he expects those underdog teams to challenge for race wins.“It is difficult to expect it to be more exciting than [2021] because that is a very high point of reference,” said Tombazis, quoted by Autosport. “But I think once there’s...
MOTORSPORTS・1 DAY AGO
The Independent

Alpine CEO Laurent Rossi has called Silverstone and Monza “shabby” and the “great” tracks will have to be at the “top of their game” to stay staple circuits in the Formula 1.Multiple new circuits are coming into the sport with the 2022 season having more than any other year with 23 slated. And the F1 isn’t stopping there with more talks being had elsewhere which could increase the amount of tracks in 2023. Rules state the F1 can’t have more than 25 races in a year and Rossi believes older circuits need to update or risk getting cut.“I personally think...
MOTORSPORTS・23 HOURS AGO