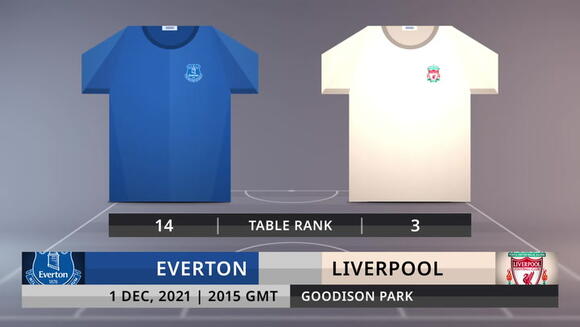 Liverpool are hoping to compound Everton’s misery when they travel to Goodison Park for the Merseyside derby this evening.

Jurgen Klopp’s side are on a terrific run of form, having beaten Arsenal and Porto before thrashing Southampton last weekend all in the space of eight days.

Liverpool came into the midweek round of fixtures just two points adrift of leaders Chelsea and have already scored 39 goals in 13 Premier League games this season.

However, for Everton, fortunes are far bleaker. Rafael Benitez is under increasing pressure after the Toffees limped to a 1-0 defeat against Brentford last weekend, with Everton having now lost five of their last six games.

The match will get underway on Wednesday 1 December at 8.15pm.

The match will be broadcast live on Amazon Prime and will be available on TV as well as mobiles and tablets.

If you're not an Amazon Prime Video subscriber start a free 30-day trial here. We may earn commission from some of the links in this article, but we never allow this to influence our content.

Despite what will be a hostile atmosphere, Liverpool should have far too much quality for an Everton side that has been listless for several weeks. Richarlison’s return will add a threat, but Liverpool have all the firepower and should ultimately cruise to victory. Everton 0-3 Liverpool.

A drone interrupted play at Brentford, we had a late, late winner at Old Trafford and Newcastle dug in for victory on an eventful afternoon
PREMIER LEAGUE・1 DAY AGO
The Guardian

Minute-by-minute report: Josh Sargent scored one of the goals of the season – if not the goal of the season – as Dean Smith’s team swept aside their relegation rivals. Scott Murray was watching.
PREMIER LEAGUE・2 DAYS AGO
The Independent

Liverpool head to Crystal Palace on Sunday afternoon, hoping for a third win in a week to start to put pressure back on Manchester City at the top of the Premier League. Victory for the Reds would leave them nine points adrift of the reigning champions with a game in hand, following their draw with Southampton on Saturday. Jurgen Klopp’s team have rediscovered form of late after a slight stutter, beating Brentford last weekend before dispatching Arsenal in midweek to reach the Carabao Cup final.For Palace, this has undoubtedly been a season of progress and putting into place building blocks...
PREMIER LEAGUE・20 HOURS AGO
The Independent

Liverpool moved to within nine points of Manchester City at the top of the Premier League table with an entertaining 3-1 win over Crystal Palace at Selhurst Park.Virgil van Dijk gave the visitors the lead in the eighth minute, thumping a bullet header beyond Vicente Guaita from an Andy Robertson corner. And Liverpool’s dominance was rewarded with a second shortly after the half hour mark when Robertson crossed for Alex Oxlade-Chamberlain to bring down and fire home at the back post.Palace finally got a foothold in the game towards the end of the first half and continued that urgency after...
PREMIER LEAGUE・19 HOURS AGO
The Independent

Liverpool have won each of their last nine meetings against Crystal Palace, scoring 29 goals in the process.Palace have conceded 13 times without reply in their last Premier League three games against Jurgen Klopp’s side - an awful run which includes the 7-0 defeat at Selhurst Park in December 2020.FOLLOW LIVE: Team news and all the action as Crystal Palace host LiverpoolBut this is a new and improved Palace team under Patrick Vieira. Although they may sit in an all too familiar position in mid-table, the quality of the football has significantly improved under the Frenchman.And they will be hoping...
PREMIER LEAGUE・22 HOURS AGO

Liverpool manager Jurgen Klopp believes defender Trent Alexander-Arnold is a unique talent with an “insane” skill-set.The right-back took his tally of assists this season to 14 with a couple in the Carabao Cup semi-final second-leg victory over Arsenal on Thursday.Since the start of the 2018-19 season, only Bayern Munich’s Thomas Muller and Paris St Germain’s Lionel Messi – both forwards – have created more goals than the England international.Thomas Muller (Bayern Munich) - 64Lionel Messi (Paris St Germain) - 47Trent Alexander-Arnold (Liverpool) - 44“I don’t know anybody who is like Trent. Who is a right-back and is that decisive and...
PREMIER LEAGUE・2 DAYS AGO
The Independent

Rafa Benitez is gone from Goodison Park, but reminders of him remain. Everton began life after their most controversial managerial appointment with defeat to a side managed by his greatest captain, with a goal made by a player he sold and conceded in a manner that felt all too familiar on the blue half of Merseyside.Steven Gerrard had an excellent record against Everton as a player. A first visit in management brought Aston Villa victory, aided by an assist from Lucas Digne, the left-back Benitez dropped, criticised and sold, and from a corner: Everton’s habit of being breached at set-pieces...
PREMIER LEAGUE・1 DAY AGO
The Independent

Jurgen Klopp insists Liverpool will not get carried away and “celebrate like kids” over a first trip to Wembley in six years as there is business to be done in the Premier League.The 2-0 second-leg Carabao Cup win at Arsenal means a return to the national stadium for a domestic cup final for the first time since they lost to Manchester City in the League Cup during Klopp’s first season in 2016.But while Thursday’s result was a much-needed boost, Klopp insists the Reds cannot allow their focus to be distracted from keeping the pressure on Manchester City, who have an...
PREMIER LEAGUE・2 DAYS AGO
The Independent

Duncan Ferguson’s second spell as Everton caretaker manager got off to the worst possible start with the club facing a likely investigation into a bottle-throwing incident during the 1-0 defeat to Aston Villa.Former Liverpool captain Steven Gerrard’s first appearance at Goodison Park as head coach barely featured as a sub-plot with the focus all on the ex-Toffees striker taking charge following the sacking of Rafael Benitez.But, like many occasions during his playing career, it was Gerrard who left the ground smiling after Emiliano Buendia’s match-winning header in first-half added time.The Villa boss was less happy about the incident which saw...
PREMIER LEAGUE・1 DAY AGO

An hour after the final whistle had blown and Aston Villa had inflicted Everton’s 10th defeat in 13 games, hundreds had been reduced to dozens, but they were still protesting. A week of one sacking concluded with supporters asking for more. “We want our club back,” read one flag. “Sack the board,” came a chorus heard time and again. Before kick-off, a plane flew over Goodison Park with a banner declaring “22 years of failure, Bill.”The supporters who threw the bottles that hit Lucas Digne and Matty Cash were revolting. Far more were in revolt. Yet whereas the calls for...
PREMIER LEAGUE・2 HOURS AGO
The Independent

In a pivotal week, Premier League clubs are looking to push through deals as the transfer window shuts.Tottenham look keen to make moves with Antonio Conte not hiding his dissatisfaction as the club’s inability to strengthen yet, with Dele Alli and Giovani lo Celso both likely to be pushed out the door after being left out of the squad for the 2-0 defeat to Chelsea. While Arsenal are also in the market for a striker, with Fiorentina’s Dusan Vlahovic top of their list, though Juventus may move should it emerge that the Viola cannot hold on to the Serbian forward...
PREMIER LEAGUE・15 MINUTES AGO
The Guardian

Derby boss Wayne Rooney says he is “flattered” to be linked with the Everton vacancy but says there has been no approach from the Merseyside club.The 36-year-old former Toffees striker has been linked with the job following Rafael Benitez’s dismissal.The ex-England international’s stock has risen after keeping the Rams in contention for survival in the Championship despite being docked 21 points for entering administration and breaching financial regulations.Rooney said: “I’m the same as everyone else, I see the speculation on social media and in the newspapers. Of course Everton is a club I grew up supporting.“I’m flattered to get brought...
PREMIER LEAGUE・2 DAYS AGO
The Guardian

Duncan Ferguson made sure the first round was on him as he treated Everton fans to a free pint before taking charge of the team’s Premier League match against Aston Villa on Saturday, according to reports. The former Everton striker has replaced Rafael Benitez in the Everton dugout after the former Liverpool boss was sacked after just six months, with the club on a miserable run of form and 16th in the Premier League table. Ferguson has been appointed caretaker manager “for the club’s upcoming games” and has urged his players to fight for the Goodison Park crowd. And before...
PREMIER LEAGUE・1 DAY AGO
San Diego Union-Tribune

As the floodlights flickered and dimmed at Vicarage Road, the light also appeared to run out on Claudio Ranieri’s Watford tenure. Norwich’s win in this crucial relegation six-pointer, delivered by Josh Sargent’s sublime backheel flick and towering header, lifted the Canaries out of the Premier League’s bottom three and dropped Watford into deeper trouble.Sargent’s first Premier League goal on 51 minutes was a brilliant moment of quality that had been desperately lacking until he turned Teemu Pukki’s cross off the underside of the bar. Moments later, play at Vicarage Road was halted for around nine minutes due to a partial...
PREMIER LEAGUE・2 DAYS AGO