Democrats took a drubbing in elections last month, in part, for simply failing to govern . Endless bickering within their congressional caucus squandered chances to pass major reforms in infrastructure, climate and social policies.

So why are Republicans rushing to make the same mistake?

When a chastened Democratic House leadership finally held a vote on a $1.2 trillion infrastructure bill several days after the election, the popular and needed legislation passed with the help of 13 House Republicans .

That GOP baker's dozen gave their constituents what they wanted, federal investment to restore crumbling roads and bridges. And they did it through consensus, exactly what most voters demand of politicians .

Yet fellow Republicans are vilifying them as outcasts, traitors and RINOs (Republicans in Name Only) for committing the unpardonable sin of working with Democrats to improve the lives of Americans.

There's talk of stripping the 13 of committee assignments, an idea quickly endorsed by former White House chief of staff Mark Meadows. One of those attacked, Rep. Fred Upton of Michigan, received death threats after his phone number was tweeted out by a complaining GOP House member.

Through it all, House Minority Leader Kevin McCarthy, R-Calif., has remained conspicuously silent . And of course former President Donald Trump, who lives in a world where gains are measured only by someone else's loss, bashed the 13 Republicans for shamefully " helping the Democrats. " 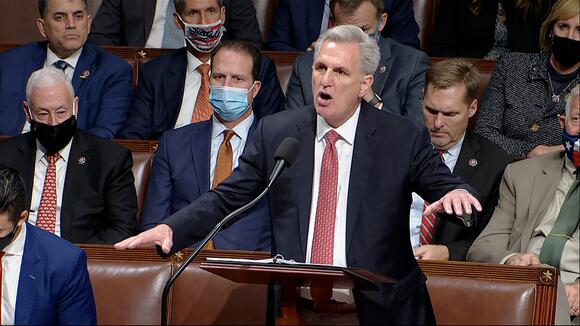 Whatever happened to helping the American people?

Beyond the raw political calculus of political obstructionism, the only policy argument Republicans in the House made was labeling the bill "socialist" spending.

From Roosevelt to Eisenhower and beyond

But federal investment in the nation's infrastructure of road, rails, bridges and water systems has a rich legacy dating from President Franklin Roosevelt's New Deal of the 1930s, through passage of the Federal-Aid Highway Act of 1956 under Republican Dwight Eisenhower, to major highway and water utilities build-outs in the 1970s-80s.

Indeed, Trump pursued his own trillion dollar plan, repeatedly promising action during various "infrastructure weeks " that came to nothing.

In fact, major federal investment to repair the nation's aging infrastructure is so long overdue that the bill, now signed into law, is only half of what the American Society of Civil Engineers says the country needs .

"Make no mistake, (this) vote was about roads, bridges, and clean water," tweeted one of the 13 Republicans, Rep. Andrew Garbarino of New York. "It was about real people, and the tangible action Congress could take to better their lives by rebuilding and revitalizing our nation's crumbling infrastructure ."

It's a sensible view that prevailed in the Senate, where the infrastructure bill passed in early August 69-30 with the help of 19 Republicans . Yet in the House, Democrats delayed it for months because of bickering. And Republicans (all but 13) trashed it largely for political expediency.

So what are voters to make of all this?

Democrats are far more wounded now. President Joe Biden's approval is at an all-time low , despite popular policies . Voter preferences ahead of 2022 midterm elections have Republicans with a 10-point lead . And as the party in power, albeit by the narrowest of margins in Congress, Biden and Democrats are getting hammered over inflation, COVID-19, border crossings and a disastrous Afghanistan withdrawal.

It's no surprise then that many Americans may well be searching for an alternative. It's just too bad Republicans aren't giving them one.

USA TODAY's editorial opinions are decided by its Editorial Board , separate from the news staff and the USA TODAY Network. Most editorials are coupled with an Opposing View, a unique USA TODAY feature.

To read more editorials, go to the Opinion front page or sign up for the daily Opinion email newsletter . To respond to this editorial, submit a comment to letters@usatoday.com .

This article originally appeared on USA TODAY: Democrats and Republicans compete for title of who's more foolish in leading America

“I think are going face a real risk of jail for the kind of laws they are breaking,” said the former Republican Speaker of the House of the Jan. 6 special committee Sunday.
CONGRESS & COURTS・20 HOURS AGO
The Independent

One year after President Joe Biden raised his right hand to swear the presidential oath of office, more Americans disapprove of his performance and believe their country is on the right track than at any point since his term began.Of the 2,005 registered voters surveyed by Morning Consult and Politico, more than half – 56 per cent – either somewhat or strongly disapprove of the job Mr Biden has done in his first year as America’s chief executive, with just 16 per cent strongly approving of his performance and a quarter of respondents approving of his work somewhat. Worse yet...
PRESIDENTIAL ELECTION・1 DAY AGO
The Independent

House Speaker Nancy Pelosi has announced her intention to run for re-election, extending a career in the House of Representatives spanning more than three decades, ahead of a midterm election battle that could determine the balance of power in Congress.The California congresswoman – who is serving her 17th term in the House, and fourth term as speaker – made the announcement on her campaign’s social media channels on 25 January.While we have made progress much more needs to be done to improve people’s lives. This election is crucial: nothing less is at stake than our Democracy.But we don’t agonize-we...
PRESIDENTIAL ELECTION・15 HOURS AGO
Reuters

WASHINGTON, Jan 24 (Reuters) - The U.S. Supreme Court on Monday declined to hear a challenge by Republican lawmakers to pandemic-related proxy voting rules set by Speaker Nancy Pelosi in the Democratic-led House of Representatives that were tailored to limit exposure to COVID-19. The voting rules, implemented in May 2020, allow members of the 435-seat House to serve as proxies for colleagues in quarantine or otherwise unable to cast floor votes in the chamber. House Republican leader Kevin McCarthy and other lawmakers had asked the Supreme Court to reverse a lower court decision that allowed the remote voting rules to remain in effect.
CONGRESS & COURTS・1 DAY AGO

While Republicans such as Greg Abbott and Ted Cruz have said Biden has an "open border," immigrations experts have said that is not correct.
PRESIDENTIAL ELECTION・1 DAY AGO
Newsweek

WASHINGTON, Jan 25 (Reuters) - Dominion Voting Systems Corp has told a court there is "no realistic possibility" that the voting machine manufacturer will reach settlements in its billion-dollar defamation lawsuits against Rudy Giuliani and Sidney Powell, lawyers who worked for former President Donald Trump. Dominion and another voting software...
U.S. POLITICS・17 HOURS AGO
Newsweek

Democrats' leader in US Congress to run for reelection

The top Democrat in the US Congress said Tuesday she plans to run for a 19th term in office, announcing that she had determined to stay on to combat existential threats to democracy. House Speaker Nancy Pelosi, who turns 82 in March, had been expected to step down, with her party bracing for a possible heavy defeat in this year's midterm elections. Despite dire predictions of a Democratic wipeout in November, Pelosi is likely to win her liberal San Francisco district comfortably -- but she did not reveal whether she intended to keep her leadership role. "Our democracy is at risk because of the assault on the truth, the assault on the US Capitol and the state-by-state assault on voting rights," Pelosi said in a video announcement.
PRESIDENTIAL ELECTION・16 HOURS AGO
FOX4 News Kansas City

The 81-year-old Pelosi says in an online video that the upcoming election is crucial, and "nothing less is at stake than our democracy.”
CONGRESS & COURTS・14 HOURS AGO
Newsweek

Liz Cheney among those to condemn remarks by former House speaker as committee member Zoe Lofgren says: ‘I think Newt has really lost it’
CONGRESS & COURTS・2 DAYS AGO

After Democrats' voting rights bill failed, a bipartisan agreement to reform how Congress counts electoral votes may be the next best bet.
PRESIDENTIAL ELECTION・1 DAY AGO
The Independent

Sen Bernie Sanders appeared eager to escalate the war between various factions of the Democratic Party on Sunday during an interview with CNN in which he stated his support for the censure and potential primarying of a senator who voted against the party’s effort to change the filibuster and pass voting rights legislation.Mr Sanders appeared on CNN’s State of the Union and said that the Arizona Democratic Party was “exactly right” to censure their state senator after Ms Sinema voted with Republicans last week against the Democrats’ voting rights push.“On that particular vote that she and [Sen Joe] Manchin...
CONGRESS & COURTS・2 DAYS AGO
Pennsylvania Capital-Star

Get real, Republicans. Americans elected you to work, not obstruct | Lloyd E. Sheaffer

And then you can stop spreading the Big Lie and defend democracy like Real Republicans would. The post Get real, Republicans. Americans elected you to work, not obstruct | Lloyd E. Sheaffer appeared first on Pennsylvania Capital-Star.
PRESIDENTIAL ELECTION・3 HOURS AGO
Colorado Springs Independent

The Constitution, kids in schools, safe streets and a secure border were among the things the House Republican leader said the GOP stood for.
PRESIDENTIAL ELECTION・2 DAYS AGO
USA TODAY

Quality Journalism for Critical Times About halfway through his marathon news conference last week, President Joe Biden finally asked the only question in Washington that’s worth asking. With congressional Republicans standing in the way of the Democrats’ every initiative, including voting rights (which should be as bipartisan as it gets), what do they actually support? “What are Republicans for? What […] The post In Year Two, no more Mr. Nice Biden, please appeared first on Florida Phoenix.
U.S. POLITICS・2 DAYS AGO
NewsRadio 740 KTRH