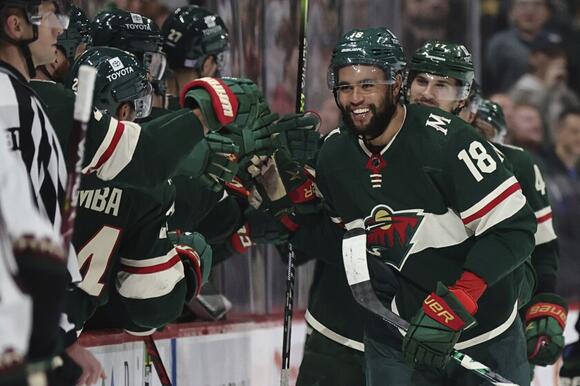 Jordan Greenway had a goal and two assists, Kirill Kaprizov scored and Kaapo Kahkonen made 29 saves as the Minnesota Wild beat the Arizona Coyotes 5-2 on Tuesday night.

Joel Eriksson Ek, Jonas Brodin and Marcus Foligno also scored for Minnesota, which leads the NHL with 59 goals scored since Nov. 2. The Wild have won four games in a row and scored 19 goals in that span.

“I just think that we’ve got some depth scoring, that everybody’s producing,” Wild coach Dean Evason said. “They’re all, for the most part, playing the right way and the same way, and if we do that, we feel that we’ll be able to score goals. Fortunately, we have and, fortunately, everybody has. It’s not one line. It’s not two guys. It’s not one defenseman. Everybody’s involved in the offense.”

Clayton Keller and Anton Stralman scored for Arizona, which has lost three of four.

After rookie Karel Vejmelka posted his first career shutout a night earlier at Winnipeg, Scott Wedgewood made the start in goal and stopped 32 shots for Arizona.

“We made strides in the right direction, which we want to get better every day,” Coyotes coach Andre Tourigny said. “It’s one of those days. I think we got better today in a lot of thing in our game and we have a lot of positive to build on. … Moral victories are sometimes overrated, but on the same time, we knew we did good things today.”

Keller got the Coyotes off to a strong start in the second game of the back-to-back, opening the scoring 5:58 into the first. Phil Kessel passed across the slot to Keller, who had trouble controlling the pass. But Keller gained control and fired a shot as he spun around, beating Kahkonen.

Minnesota answered with Eriksson Ek’s ninth goal of the season just over a minute later.

From then on, it was all Wild, who scored three times in the second period.

“We acknowledged it in the intermission,” Foligno said of the team’s play in the first. “We knew it wasn’t our style of play, and we were definitely playing down to the opposition and it wasn’t good. The only good thing about that is our team, we acknowledge stuff like that and just speak about it and know it’s not good. We definitely played a better game in the second and third.”

Kaprizov’s shot from the point deflected off Arizona defenseman Ilya Lyubushkin for Kaprizov’s seventh goal of the season. He has four goals and 10 assists in the last seven games, leading the NHL in scoring and assists during that stretch.

Jordan Greenway tipped home a shot from the point for his first goal of the season, and Brodin unleashed a big slap shot to score with 2.9 seconds left in the second.

“We just talked about it with all lines kind of contributing, and hard to play against and hard on the puck,” Foligno said of the Wild’s play. “Not that you have a lot of friends in this league, but you know some guys on other teams and after games they say that it’s a tough team to play against. It’s really grueling and physical hockey. That’s what we expect.”

Minnesota has won eight straight games against Arizona, with each victory coming by at least three goals.

After an 0-10-1 start, Arizona had gone 5-5-1 in its previous 11 games. The Coyotes had improved by limiting opponents.

They had given up two goals or less in seven of the previous nine games, but Minnesota’s high-scoring unit proved difficult to stop.

NOTES: Wild F Frederick Gaudreau was scratched and the team announced he was in the COVID-19 protocol. Rookie D Calen Addison was active and played forward. … F Johan Larsson was back in the Arizona lineup after missing five games due to COVID-19. Andrew Ladd, who had played two games after missing six due to COVID-19 protocol, was scratched. Alex Galchenyuk was also scratched after playing in nine straight games. … Wild F Mats Zuccarello missed his second game with a hand injury.

Coyotes: Return home and get a short break before hosting Vegas on Friday.

Wild: Host New Jersey on Thursday as part of a five-game homestand.

The Wild's fourth line doesn't play the most minutes. Connor Dewar, Brandon Duhaime and Nico Sturm aren't on the power play, and many games their contributions are the steppingstones to highlights: A blocked shot, finished check or timely clear. "Most nights there's not a lot of glory in the kind...
NHL・1 DAY AGO
Sportsnaut

The Pittsburgh Penguins are proving that it’s never wise to count them out. Not in games. Not in the chase
NHL・1 DAY AGO
93.7 The Fan

At times during Tuesday’s 6-3 win over the Arizona Coyotes at PPG Paints Arena, fans may thought they were seeing the hockey equivalent of the Harlem Globetrotters making a laughingstock out of the Washington Generals.
NHL・3 HOURS AGO
fox9.com

MINNEAPOLIS - The Minnesota Wild had a big night in a lot of ways in Monday night’s 8-2 win over the Montreal Canadiens at Xcel Energy Center. Kirill Kaprizov became the fastest player in franchise history to 100 career points, doing so in 92 games. That matches Edmonton Oilers’ star Connor McDavid, and is behind only Alex Ovechkin (77), Sidney Crosby (80) and Evgeni Malkin (89), three of the biggest names in hockey.
NHL・12 HOURS AGO

The NHL season officially started back on October 12. In this article, we track all the NHL games today as
NFL・19 HOURS AGO
Sportsnaut

He said it initially it was a head-shot and after having time to watch it, Pens head coach Mike Sullivan questions why the league won’t punish the hit on Teddy Blueger
NHL・14 HOURS AGO
Sportsnaut

Now that the 2021-22 season is about half of the way through, and Covid is ravaging many clubs, it’s time
NHL・12 HOURS AGO
Chicago Tribune

Kevin Lankinen is back on the shelf seemingly as quickly as he returned. The Chicago Blackhawks placed the backup goalie on injured reserve Sunday with a right hand injury a day after he made 40 saves during a 4-3 overtime road loss to the Minnesota Wild. Lankinen appeared in each of the Hawks’ last two games, his first action since returning from COVID-19 protocols. Before that, his last ...
NHL・2 DAYS AGO
San Diego Union-Tribune

NEW YORK (AP) — Adam Fox scored the deciding goal in the sixth round of a shootout and the New York Rangers beat the Los Angeles Kings 3-2 on Monday night for their ninth win in 12 games. Chris Kreider got his NHL-leading 30th goal, Barclay Goodrow also scored and Artemi Panarin had two assists as New York won its fifth straight at home. Igor Shesterkin stopped 28 shots to pick up his 20th win of the season. Blake Lizotte and Alex Iafallo scored in the second period for Los Angeles. Jonathan Quick stopped 34 shots as the Kings lost for the...
NHL・1 DAY AGO
CBS Boston

BOSTON (CBS) — The Bruins will be a little shorthanded along the blue line as they wrap up a seven-game homestand. Defenseman Matt Grzelcyk will be sidelined on Monday night when the B’s welcome the Anaheim Ducks to TD Garden. Grzelcyk briefly left Saturday’s win over the Jets after being sent into the boards by Winnipeg’s Pierre-Luc Duboius in the first period. He did return to the game and finished with 13:35 of ice time, and was credited with an assist on David Pastrnak’s game-winning goal in the third period. Head coach Bruce Cassidy was cautiously optimistic that Grzelcyk avoided a serious...
NHL・1 DAY AGO
San Diego Union-Tribune

Matthew Tkachuk had a career-high five assists, Johnny Gaudreau had a goal and three assists, and the Calgary Flames routed the St. Louis Blues 7-1
NHL・1 DAY AGO
San Diego Union-Tribune

Nazem Kadri and Mikko Rantanen scored, Pavel Francouz made 23 saves for his third career shutout and the Colorado Avalanche beat the Chicago Blackhawks 2-0 to extend their franchise-record home winning streak to 16 games
NHL・1 DAY AGO
93.7 The Fan

It’s the worst team in the Western Conference & even though they’ve played better of late, can the Pens keep their focus tonight against Phil Kessel and mates
NHL・9 HOURS AGO
WGR550

The Buffalo Sabres and Senators are back at it again in Ottawa, just a week after a 3-1 win for the blue and gold also inside Canadian Tire Centre. Making their returns to the lineup for Buffalo are Casey Mittelstadt and Zemgus Girgensons.
NHL・7 HOURS AGO