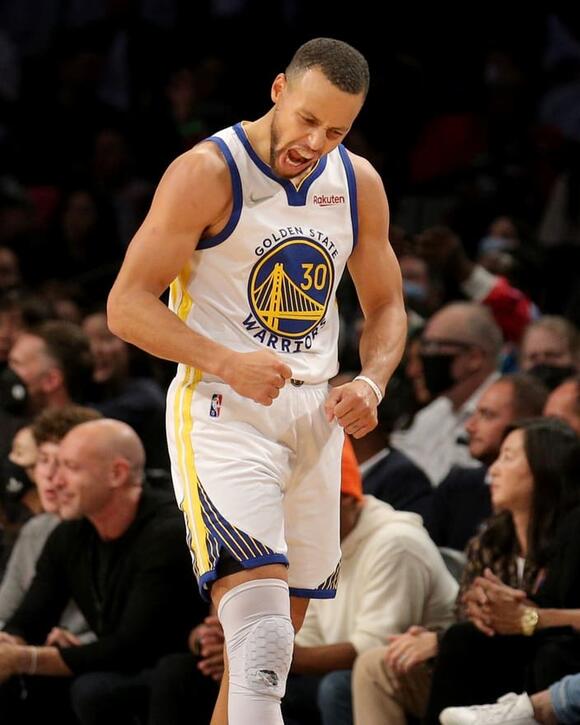 The Golden State Warriors are in Phoenix to play the Suns on Tuesday night.

The Golden State Warriors are in Arizona to take on the Phoenix Suns on Tuesday evening.

The matchup is a very highly anticipated one, because these are the two best teams in the NBA.

The Warriors are 18-2 with the first seed in the Western Conference, while the Suns are on a 16-game winning streak and have a 17-3 record.

Before the game, the Warriors shared a video of some of the players walking into the arena.

One of the players was Steph Curry walking into the arena with his pre-game outfit on, and the video can be seen in a tweet that is embedded below from the Twitter account of the Warriors.

The Suns made the NBA Finals last season, and after making the NBA Finals for five straight seasons, the Warriors have missed the postseason in each of the last two years.

The wife of NBA legend Steph Curry has called the gossip 'ridiculous'. The wife of Golden State Warriors star Steph Curry, Ayesha, has addressed rumors that the couple is in an open relationship, labeling the speculation 'disrespectful'. Claims circled on gossip blogs in recent weeks and cited an anonymous tip...
CHARLOTTE, NC・5 DAYS AGO
ClutchPoints

Steve Kerr gets brutally honest on Stephen Curry, Warriors getting thrashed vs. Bucks

The Golden State Warriors have played uncharacteristically lackluster basketball in their last five games. Aside from their lone win over the Cleveland Cavaliers fueled by the return of Klay Thompson, the Warriors have been beaten handily by their other four opponents. Head coach Steve Kerr, however, remains unbothered by the...
NBA・2 DAYS AGO
NBC Bay Area

Steph brings young Dubs fan to tears by tossing towel to her originally appeared on NBC Sports Bayarea. Steph Curry didn't give Warriors fans in Milwaukee much to cheer about on the court Thursday night, but after Golden State's blowout loss to the Bucks a Fiserv Forum, he made the day for a young Dubs fan in attendance.
NBA・2 DAYS AGO
enstarz.com

It has come to the attention of numerous netizens that there seemed to be something different with Stephen Curry and his wife Ayesha's relationship as a married couple. Rumor has it that it seems like Stephen Curry actually has a "not-so-perfect marriage." In a recent report, an Instagram blog for "exposing celebrities' secrets," Deumoix exposed the NBA star and his longtime wife having a "non-traditional relationship."
RELATIONSHIPS・25 DAYS AGO

Here's What Steph Curry Said After The Warriors Got Blown Out

The Golden State Warriors got crushed by the Milwaukee Bucks in Wisconsin on Thursday night.
NBA・2 DAYS AGO
FastBreak on FanNation

Steph Curry has been ruled out for Sunday's game between the Golden State Warriors and Minnesota Timberwolves.
NBA・1 DAY AGO
AllClippers

With both teams coming off of blowout losses, the Golden State Warriors and Chicago Bulls are set to face off on Friday night. The game is highly anticipated, with both teams sitting at or near the top of their respective conferences. Coming into this matchup, the Bulls (27-12) are first in the Eastern Conference, while the Warriors (30-11) sit at second in the Western Conference.
NBA・2 DAYS AGO
ClutchPoints

After sitting out Friday’s game against the Chicago Bulls, Golden State Warriors star Klay Thompson could see a slight increase in his minutes on Sunday, according to Steve Kerr. Thompson was sidelined in their showdown with the Bulls as part of the Warriors’ system to slowly ease him back...
NBA・2 DAYS AGO

NBA guard Steph Curry has undeniably cemented his place in NBA history. Now, the 33-year old NBA champion wants to share more of his history away from the game, too, with his plan for an eight-figure deal about his memoirs.
NBA・1 DAY AGO
USA TODAY

NBA's MVP race heats up: Our experts' picks for all the first-half NBA award winners

Who deserves the NBA's top awards midway through the regular season? And who is the most surprising and most disappointing team of the first half?
NBA・2 DAYS AGO
FastBreak on FanNation

Chris Paul will be available on Friday night for the game between the Phoenix Suns and Indiana Pacers in Indianapolis.
NBA・2 DAYS AGO
Golden State of Mind

For the second time this year, Golden State Warriors star point guard Steph Curry will play both ends of a road back-to-back. One day after the Warriors got obliterated by the Milwaukee Bucks, Curry will try and right the ship against the Chicago Bulls, as his co-stars Klay Thompson and Draymond Green rest (the former for obvious reasons, the latter due to a lingering quad injury). Gary Payton II is also out.
NBA・2 DAYS AGO

CHICAGO — Steph Curry was clearly bothered Friday night by an awkward fall he took in the second quarter, but he remained in the game anyway, frequently flexing the fingers on his right hand. The injury will, however, prevent Curry from playing in the finale of the Warriors’ four-game...
NBA・1 DAY AGO
Minneapolis Star Tribune

7 p.m. vs. Golden State * Target Center * BSN, 830-AM Warriors update: The Warriors (31-11), owners of the NBA's second-best record, listed both Stephen Curry and Draymond Green out for the game. Curry has a sore right hand, which he fell on in the first half of Friday's 138-96 victory at Chicago. Curry told reporters after Friday's game, "Anything that involves the hands, especially the right one, you're a little concerned. But the feeling came back, the strength came back. It hurts, but I'll be all right." Green is listed out for the fourth consecutive game because of left calf tightness. ... G Klay Thompson should be available after returning last Sunday against Cleveland following a 2½-year absence because of injuries. He has averaged 14.0 points and played around 20 minutes in three games, sitting out Friday because of injury management. ... Golden State is 13-8 on the road; this is the finale of a four-game trip that began with losses at Memphis and Milwaukee. ... Gary Payton II is questionable because of lower back spasms and 2020 second overall pick James Wiseman (right knee meniscus surgeries) remains out all season.
NBA・1 DAY AGO
FastBreak on FanNation

Suns Starting Lineup And Injury Report For Game With Pistons

The Phoenix Suns are in Michigan to take on the Detroit Pistons on Sunday afternoon.
NBA・10 HOURS AGO
FastBreak on FanNation

Chris Paul of the Phoenix Suns sent out a tweet about Ja'Marr Chase. On Saturday, Chase and the Cincinnati Bengals defeated the Las Vegas Raiders in the Wild Card round of the NFL playoffs.
NBA・1 DAY AGO

Deandre Ayton hurt his ankle during the game between the Phoenix Suns and Detroit Pistons on Sunday afternoon in Michigan. The Suns have announced that it is an ankle sprain, and he has been ruled out for the remainder of the game.
NBA・8 HOURS AGO
Sportsnaut

Cade Cunningham was ejected during the game between the Phoenix Suns and Detroit Pistons on Sunday afternoon in Michigan.
NBA・8 HOURS AGO
95.7 The Game

The Warriors will be without three rotation players Sunday night against the Timberwolves – stars Steph Curry and Draymond Green, and key role player Gary Payton II.
NBA・9 HOURS AGO