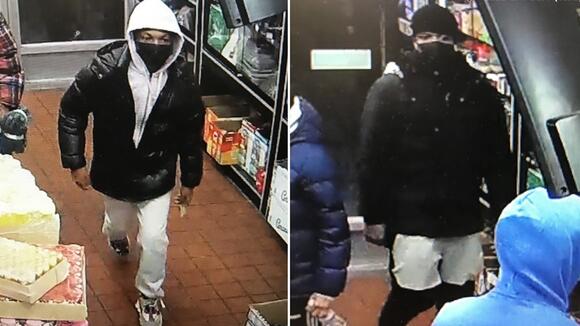 Police are looking for two individuals in connection to the shooting of a teenager in Brooklyn over the weekend. The incident was caught on camera inside a store on Nostrand Avenue on Saturday around 6 p.m.. Investigators say one of the men shot an 18-year-old store clerk in the head during a confrontation inside the M&M Grocery. The victim was taken to the hospital in critical condition where he remains. On Tuesday, the Yemeni American Merchants Association released a statement calling for action amid a string of attacks on Yemini bodegas. "We at the Yemeni American Merchants Association (YAMA) are gravely concerned with the string of attacks on Yemeni bodegas in the recent weeks in NYC. With the most recent attack in Brooklyn on 18-year-old Zayid Muthana, who was shot in the head while working at his family's bodega. Thankfully, Muthana is currently in stable condition. We are calling on swift action from the city to counter these attacks and protect our bodega owners." They have called for a press conference on Wednesday afternoon to address the matter. Anyone with information is asked to call the NYPD's Crime Stoppers Hotline at 1-800-577-TIPS (8477) or for Spanish, 1-888-57-PISTA (74782). ALSO READ | Cops explain how new DNA technology led to arrest in 1999 cold case

I pray for the young victim that he will fully recover, so sad that some people can be so cold hearted and evil! to take a try a life because of their evils ways, Sad!😭🙏

Police say the driver was parked in the Westchester Square section when someone walked up to his vehicle and shot him in the leg.
4 HOURS AGO
ABCNY

An off-duty officer working security at an Upper West Side Duane Reade shot a suspect who police say had just stabbed a man.
MANHATTAN, NY・16 HOURS AGO
ABCNY

Officials say the 67-year-old grandmother's attacker confessed why he did it.
BROOKLYN, NY・1 DAY AGO

A woman was hospitalized after she was stabbed during a dispute inside a subway station in Harlem Tuesday.
PUBLIC SAFETY・3 DAYS AGO

Rawleigh Thompson was heading to church on Sunday when a man pushed him from behind onto the subway tracks at the Fulton Street Station, directly in front of an oncoming train.
NEW YORK CITY, NY・11 HOURS AGO
ABCNY

Three teenagers are now facing murder charges in New Jersey for the death of 18-year-old Robert Cuadra, an honor student who was just months away from attending his dream university on a full scholarship.
PATERSON, NJ・7 HOURS AGO
ABCNY

A 13-year-old boy was charged with arson, reckless endangerment and criminal mischief for allegedly setting the fire that burned through an East Village card shop earlier this month.
PUBLIC SAFETY・3 DAYS AGO
ABCNY

The 91-year-old victim was discovered unconscious and unresponsive on the first floor after firefighters extinguished the blaze in Bellerose, Queens.
QUEENS, NY・3 DAYS AGO