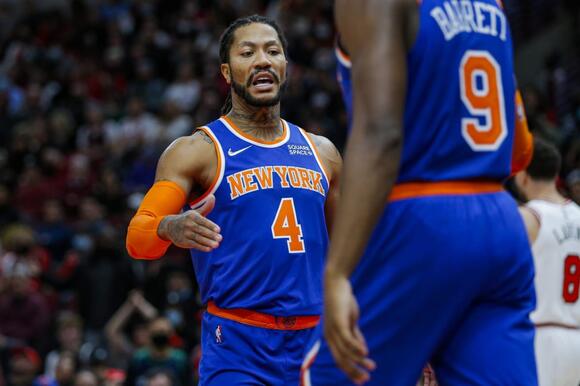 Derrick Rose had an unbelievable move in the game between the New York Knicks and Brooklyn Nets.

The New York Knicks are in Brooklyn playing the Nets at Barclays Center on Tuesday evening, and during the first half Derrick Rose had a sensational crossover.

The former MVP was being guarded by Paul Milsap, and he had a ridiculous crossover and nailed the jump shot.

Rose had been questionable for the game with an ankle injury, but is obviously playing and looks good.

Coming into the game, the Knicks had been coming off of a win over the Atlanta Hawks on Saturday night, and had two full days of no games before taking on the Nets on Tuesday.

As for the Nets, they are the number one seed in the east with a 14-6 record.

James Harden has responded to reports that he is unhappy playing with the Brooklyn Nets and living in Brooklyn, stating that he is unaware of where that notion came from. “I don’t know what you talking about,” Harden said during an interview on Tuesday (Jan. 25). “I don’t know about no reports.” The claims of Harden’s alleged discontentment stem from a Bleacher Report article by contributor Jake Fischer, who reported that “multiple sources with knowledge of the situation” said while Harden “remains invested” in pursuing a title run with the Nets this season, he is looking to weigh his options following...
NBA・14 HOURS AGO
FastBreak on FanNation

The Cleveland Cavaliers have announced their starting lineup for Monday's game with the New York Knicks.
NBA・2 DAYS AGO
94 WIP Sports Radio

James Harden reportedly intends to become an unrestricted free-agent this offseason for the first time in his career with the plan to “explore other opportunities.”
NBA・1 DAY AGO

Anthony Davis makes his return, starts for Lakers vs. Nets

Lakers star Anthony Davis played against the Brooklyn Nets after missing 17 games because of a sprained knee.
NBA・1 DAY AGO
FastBreak on FanNation

Mitchell Robinson is expected to play on Wednesday night in the game between the New York Knicks and Miami Heat.
NBA・18 HOURS AGO
Sportsnaut

Jarrett Allen has been listed as questionable for Monday's game between the New York Knicks and Cleveland Cavaliers.
NBA・2 DAYS AGO
News 5 Cleveland WEWS

The Cleveland Cavaliers the New York Knicks Monday night at Rocket Mortgage FieldHouse, with Kevin Love driving the 3 train all night, Darius Garland showing his star power, Isaac Okoro playing gritty ball and Rajon Rondo having a solid debut to help lead the Cavs to a 95-93 win.
NBA・2 DAYS AGO
FastBreak on FanNation

The numbers favor the Miami Heat. Miami, which plays host to the New York Knicks on Wednesday night, has the
NBA・1 DAY AGO

James Harden is questionable for the game between the Denver Nuggets and Brooklyn Nets.
NBA・11 HOURS AGO
FastBreak on FanNation

Rajon Rondo will be available on Monday night in the game between the New York Knicks and Cleveland Cavaliers.
NBA・2 DAYS AGO
fadeawayworld.net

Chicago Bulls Almost Passed Up On Derrick Rose In 2008 Draft Because Of His Brother: "If You Can’t Accept My Brother, Don’t Pick Me.”

Derrick Rose is one of the biggest 'what-ifs?' in NBA history. The current New York Knicks point guard entered the league with high expectations, ready to take the Chicago Bulls back to the top of the association, which he did to some extent. However, injuries were ruthless with him and prevented Rose from having a better and more successful career.
NBA・1 DAY AGO
FastBreak on FanNation

The Brooklyn Nets and Denver Nuggets have announced their starting lineups.
NBA・10 HOURS AGO

MIAMI — When the formal part of the Knicks’ morning shootaround ended at FTX Arena on Tuesday, coach Tom Thibodeau huddled on the sidelines with rehabbing Derrick Rose for a 10-minute conversation. It was a sign Rose’s ankle is getting closer, a sign how much Thibodeau still loves...
NBA・14 HOURS AGO
FastBreak on FanNation

Nets Injury Report Against The Nuggets

The Brooklyn Nets are hosting the Denver Nuggets on Wednesday night at Barclays Center.
NBA・12 HOURS AGO
FastBreak on FanNation

The Brooklyn Nets have announced their injury report for Monday's game against the Los Angeles Lakers.
NBA・1 DAY AGO
fadeawayworld.net

Adrian Wojnarowski Drops Huge Update On James Harden Situation: "He Has Repeatedly Told Management, Ownership, Those In The Organization That He Is Committed To Being A Net."

James Harden's future with the Nets has taken over the headlines in recent days. Amid a troubling campaign for Harden and his squad, the idea that he might be open to another change of scenery is becoming more believable by the day. Recently, the Philadelphia Inquirer even reported that Harden...
NBA・7 HOURS AGO