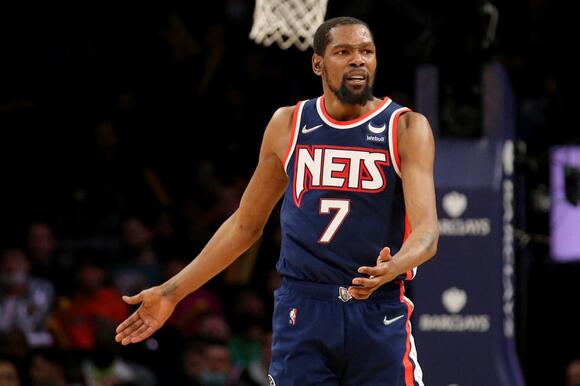 Kevin Durant had an unbelievable crossover in the game between the New York Knicks and Brooklyn Nets.

Kevin Durant and the Brooklyn Nets are hosting the New York Knicks on Tuesday at Barclays Center, and during the game the 2014 MVP had a sensational move.

Durant had a crossover that sent All-Star Julius Randle to the ground.

Coming into the game, the Nets were the number one seed in the Eastern Conference with a 14-6 record in their first 20 games of the 2021-22 NBA season.

As for the Knicks, they are coming off of a season where they made the playoffs for the first time since the 2012-13 NBA season.

It is clear at this point that the Brooklyn Nets are looking to shake up their roster ahead of the upcoming February trade deadline. Whispers of a James Harden exit have already emerged, while reports of a potential trade for promising big man Nic Claxton have also surfaced. Another name...
NBA・2 DAYS AGO
FastBreak on FanNation

Kyrie Irving and the Brooklyn Nets beat the San Antonio Spurs on Friday evening in Texas.
NBA・1 DAY AGO
Sportsnaut

According to The Athletic’s Shams Charania, the Brooklyn Nets have agreed to find big man Paul Millsap a new team
NBA・1 DAY AGO
NBA Analysis Network

Time For Knicks To Re-Consider Julius Randle As Cornerstone?

New York City is always a very energetic place and there are always people celebrating something, but last NBA season, there was a lot to celebrate in New York because of the Knicks success. Not only did the Knicks make the playoffs for the first-time since 2013, but they claimed...
NBA・1 DAY AGO

The New York Knicks announced that they have signed Ryan Arcidiacono, and waived Solomon Hill.
NBA・2 DAYS AGO
Hoops Rumors

The NBA has hit New York’s two franchises with fines, announcing in a pair of press releases that the Knicks and Nets have each been docked $25K. The Knicks’ penalty is a result of violating league rules relating to media interview access, according to the league. New York refused to make Julius Randle available to reporters following Thursday’s loss to the Pelicans. It was the seventh straight time that Randle hasn’t spoken to the media after a game, notes Fred Katz of The Athletic (Twitter link), so the fine is presumably a response to a series of violations rather than a single incident.
NBA・2 DAYS AGO
Finger Lakes Times

NEW YORK — It was the same old story for the Knicks Thursday night:. The starters were brutal, and it took the bench to make it a game. Julius Randle, Kemba Walker and company ran up a deficit that got to 24 points early in the fourth quarter. A lineup of Immanuel Quickley, Alec Burks, Obi Toppin and Quentin Grimes turned in a spirited performance to cut the lead to 10 twice, but it was too little too late in a 102-91 loss to the Pelicans.
NBA・2 DAYS AGO
WFAN Sports Radio

The Nets are currently ahead of the Knicks in most popular merchandise in the NBA so far this season, with Kevin Durant highlighting jersey sales.
NBA・2 DAYS AGO

The Brooklyn Nets are in Texas to play the San Antonio Spurs on Friday night.
NBA・1 DAY AGO
FastBreak on FanNation

Julius Randle is getting a thumbs down from Knicks fans for his performance this season.
NBA・2 DAYS AGO
Newsday

So it’s come down to this. The Knicks ran a promo before Thursday night’s game offering a free scoop of ice cream at a Madison Square Garden concession stand for any fan who could produce an All-Star ballot showing a vote for Julius Randle. As hard as it...
NBA・2 DAYS AGO

Knicks Starting Lineup Against The Pelicans

The New York Knicks have announced their starting lineup for Thursday's game against the New Orleans Pelicans.
NBA・2 DAYS AGO
ClutchPoints

3 reasons why Julius Randle continues to struggle with Knicks

For a long stretch of the previous decade, the New York Knicks were in the receiving end of scrutiny and bashing from NBA fans. With the hiring of Tom Thibodeau and acquisition of Julius Randle, New York built a whole new and rejuvenated culture in Madison Square Garden. The Knicks...
NBA・1 DAY AGO
New York Post

As frustration builds, the Knicks are not just losing games but money, too. The team has been fined $25,000 for violating league rules concerning media interview access, the NBA announced Friday, one day after the team refused to make Julius Randle available to reporters following a 102-91 loss to the Pelicans.
NBA・2 DAYS AGO

Nets playing without Kevin Durant: How they doing? How will it go?

The thing that the borough of Brooklyn has feared the most just happened, and I’m not talking about the Chitauri raining fire upon the City. In a 120-105 win over the New Orleans Pelicans the Nets still lost, as Kevin Durant exited the game in the second quarter with a left knee injury.
NBA・1 DAY AGO
Yardbarker

Julius Randle has continued to avoid the media after games, and now the New York Knicks are paying the price — literally. The Knicks were fined $25,000 by the NBA for not making Randle available to speak with the media. Players being available to talk with the media is part of their obligations.
NBA・2 DAYS AGO
FanSided

What happened to Julius Randle and the what should the Knicks do?

After a disappointing start to his New York Knicks career, it seemed as if Julius Randle’s time in New York would not be that long. The Knicks made it known they were open to trading him after selecting Obi Toppin with the 8th overall pick. However, out of nowhere,...
NBA・23 HOURS AGO
FastBreak on FanNation

Cam Reddish is available to make his debut for the New York Knicks on Sunday against the Los Angeles Clippers.
NBA・2 HOURS AGO