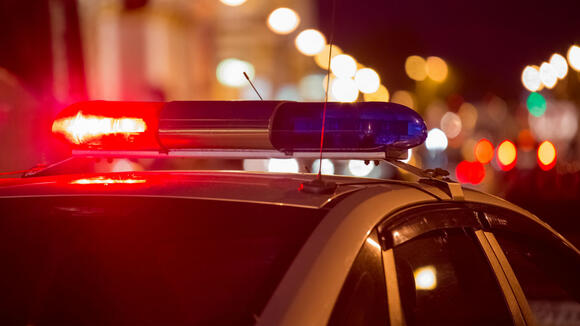 A New Jersey police officer accused of killing a pedestrian and then taking the victim's body to his home was allegedly driving intoxicated, according to court documents. Newark Police Officer Louis Santiago, 25, is facing vehicular homicide, DWI and other related charges after striking a pedestrian on the Garden State Parkway, authorities said. On Nov. 1 around 3 a.m., Santiago allegedly struck the victim with a 2005 Honda Accord he was driving and did not call 911. Instead, he allegedly left the scene of the accident, came back to the scene, placed the victim in his car and then at some point returned to the scene with the victim's dead body. Authorities say Santiago took the body of the victim, Damian Z. Dymka, a 29-year-old nurse from Garfield in Bergen County, to his home in Bloomfield where he discussed with his mother what to do with the body. SEE ALSO | Officer struck pedestrian then drove home with victim's body: Prosecutor According to an affidavit of probable cause, 25-year-old Albert Guzman, of Newark, who was allegedly a passenger in the car, told Santiago's mother, 53-year-old Annette Santiago, that her son hit the victim "while driving drunk and that the body was in the Accord." Annette Santiago then allegedly went to view the dead victim in the backseat and told her son to "put that body back where you hit it. Put it on the floor." Police discovered the victim in the back seat of the car after Santiago's father, a lieutenant with the Newark Police Department, called 911 to report that his son had been in an accident, according to the Essex County Prosecutor's Office. Both Albert Guzman and Annette Santiago are charged with conspiracy to desecrate human remains, hindering apprehension, and conspiracy to hinder apprehension and tamper with physical evidence. All three were arrested, charged and released with conditions. ALSO READ | 2 men impersonating NYPD officers rob home in the Bronx: New video

Police were called to a report of a disturbance at a Norwalk home owned by 61-year-old Ellen Wink, who is the city's deputy Republican registrar of voters and served as city clerk from 2009 to 2011.
NORWALK, CT・20 HOURS AGO
ABCNY

Paterson Public Schools Commissioner of Education Emanuel Capers said on Facebook said Cuadra was bringing groceries into his grandmother's home when he was struck.
PATERSON, NJ・1 DAY AGO
ABCNY

Three NYPD officers have been shot in the first 20 days of 2022, and it was another close call for them Thursday in the Bronx.
BRONX, NY・1 DAY AGO
ABCNY

10-year-old child struck by vehicle in Queens; Driver in custody

A 10-year-old child is in critical condition after being struck by a vehicle in Queens on Thursday afternoon.
QUEENS, NY・1 DAY AGO

Two police officers responding to a domestic violence call of a mother and son fighting were shot, one fatally, in a first floor Harlem apartment.
NEW YORK CITY, NY・13 HOURS AGO
ABCNY

The 34-year-old driver was punched, stabbed twice in the torso and had his Honda Accord stolen at around 9:30 p.m. Thursday.
BRONX, NY・1 DAY AGO
ABCNY

While Laura Parker Russo is not a licensed medical professional, her defense attorney said she has diabetic family members and is "constantly giving medicine."
SEA CLIFF, NY・18 HOURS AGO

A man has died after he was shot by police while they responded to a burglary in progress in the Bronx on Thursday.
BRONX, NY・1 DAY AGO
ABCNY

Police in Sparta say a beloved 5-year-old Yorkie named Tommy died in a bear attack after his owner let him out into the backyard Wednesday night.
PUBLIC SAFETY・19 HOURS AGO
ABCNY

The detective was struck in the leg, but was able to hold up a ballistics shield, protecting the other officers from the barrage of gunfire as he bled from his wound.
STATEN ISLAND, NY・1 DAY AGO
ABCNY

Car plunges off ramp to Bruckner Expressway into construction site below

Police are investigating a crash involving a vehicle that plunged off a ramp to the Bruckner Expressway.
BRONX, NY・1 DAY AGO

Man shot in leg during robbery in Bensonhurst

A 30-year-old man was shot in the leg during a robbery in Bensonhurst, Brooklyn.
BROOKLYN, NY・1 DAY AGO
ABCNY

The FBI announced Friday that Brian Laundrie claimed responsibility for killing Gabby Petito in a notebook found near his body.
PUBLIC SAFETY・20 HOURS AGO
ABCNY

When the man came to her home to pick up the money, she handed over an empty envelope and police waiting inside jumped into action.
SEAFORD, NY・1 HOUR AGO
ABCNY

A police officer and a suspect were shot on Staten Island this morning.
STATEN ISLAND, NY・2 DAYS AGO
ABCNY

More than 130 convictions relying on the testimony of a former undercover NYPD detective accused of lying and framing innocent people have been thrown out.
BRONX, NY・1 DAY AGO
ABCNY

Bronx residents pick up the pieces, mourn loved one after fatal explosion on Fox Street

The explosion in the Bronx on Tuesday devastated long time residents who now have lost the homes they purchased 35 years ago.
BRONX, NY・1 DAY AGO
ABCNY

Neighbors heard screams and officers rushed in to save a woman trapped under a couch. Five of those officers suffered minor injuries.
BRONX, NY・2 DAYS AGO