1 dead after vehicle crashes into tree near Cedar Park 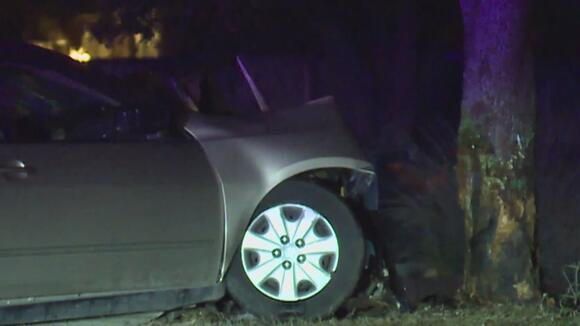 AUSTIN (KXAN) — One person died after a vehicle crashed into a tree near Cedar Park Tuesday night, Austin-Travis County EMS said in a tweet.

The Cedar Park Police Department on Wednesday identified the driver as Toby David Garonzik, 74. He was pronounced dead at the scene.

ATCEMS said it got multiple 911 calls reporting a person was pinned inside of a vehicle at the 14000 block of Anderson Mill Road, which is near FM 620.

The crash is still under investigation.

2 people hospitalized in 2-vehicle rollover on I-35 Sunday

Austin-Travis County EMS crews responded to a two vehicle collision in the 1600 block of northbound I-35 just before 2 p.m. Sunday. Crews helped extricate four patients after both vehicles rolled over.
AUSTIN, TX・20 HOURS AGO
KXAN

Austin-Travis County Emergency Medical Services is on the scene of a vehicle versus pedestrian crash at the 1400 block of East Anderson Lane in the eastbound direction.
AUSTIN, TX・1 DAY AGO
KXAN

The Austin Fire Department has knocked down a fire in a metal service shop building at 6518 north Lamar Boulevard but crews are still on scene.
AUSTIN, TX・1 DAY AGO

One person died in a crash in west Travis County Friday afternoon, according to Austin-Travis County EMS.
TRAVIS COUNTY, TX・2 DAYS AGO
KXAN

One person has died after a crash in northeast Austin in the early hours of Saturday morning, according to medics.
AUSTIN, TX・2 DAYS AGO
KXAN

Fire weather warnings are in place due to powerful winds blowing through Central Texas on Saturday.
AUSTIN, TX・2 DAYS AGO
KXAN

The fire is in the back of the Balcones Resources recycling plant located at 9801 Chandler Road, and multiple agencies are fighting the fire, Taylor city officials said.
TAYLOR, TX・2 DAYS AGO

The investigation is taking place near the 14000 block of The Lakes Boulevard. That's near West Howard Lane and Interstate 35.
AUSTIN, TX・2 DAYS AGO
KXAN

Firefighters are busy in Williamson County after a few fires popped up at the same time Friday afternoon.
WILLIAMSON COUNTY, TX・2 DAYS AGO

An 18-year-old has been charged with murder in the shooting death of a man that took place earlier this month.
TRAVIS COUNTY, TX・2 DAYS AGO
KXAN

UTPD tweeted at 8:37 a.m. saying it was sending officers to the scene, and just before 9:40 a.m., UTPD confirmed the investigation was for something suspicious. The area is northwest of Darrel K Royal-Texas Memorial Stadium. Classes are back in session from winter break on Tuesday.
AUSTIN, TX・3 DAYS AGO
KXAN

Police say the 6 month-old, golden haired pup got away from its owner on Dec. 30 at the PetSmart near Interstate 35 and State Highway 45. It ended up with an "unknown suspect" who then used a fake phone number to contact the owner.
ROUND ROCK, TX・3 DAYS AGO
KXAN

A grandmother in Virginia is looking for answers after her 7-year-old grandson woke up alone in a bus barn, and then tried to walk back to school
NEWPORT NEWS, VA・12 HOURS AGO
KXAN

The Austin Police Department says they're doing extra patrols for local Jewish centers and facilities in response to a hostage situation in the Dallas-Fort Worth area at a synagogue.
AUSTIN, TX・1 DAY AGO
KXAN

The woman seen on cell phone video being punched repeatedly by an Austin police officer is speaking out, along with her attorney, after filing a federal lawsuit against the city claiming excessive force.
AUSTIN, TX・2 DAYS AGO
KXAN

Austin Fire Department tips on how to stay safe during elevated fire days in the winter.
AUSTIN, TX・2 DAYS AGO
KXAN